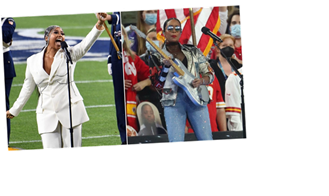 Jazmine Sullivan and H.E.R. are celebrating their Super Bowl wins after electrifying performances at the big game on Sunday night.

The R&B artists have received widespread praise on social media for their performances; H.E.R. performed “America the Beautiful” and Sullivan performed the national anthem as a duet with country artist Eric Church.

H.E.R. reflected on the experience during an appearance on “CBS This Morning” on Monday, saying that she wanted to bring her “flavor” to the performance. The Grammy winner also celebrated the fact that she and another Black woman were featured for such a widely viewed event.

“To be alongside somebody like Jazmine, and for two Black women to be up there was a powerful message, so I was just happy to be a part of [it] this year,” H.E.R. said.

Co-host Gayle King also noted the significance of the visibility of Black women: “That was a good example of Black Girl Magic, a lot of people are saying,” she said.

Sullivan celebrated the “bridging” of her sound and Church’s for their performance of the national anthem, but she also recognized during the CBS segment that her and H.E.R.’s performances served as “a moment for Black girls… and representing who we are,” she said. (See the clip of the CBS interview below.)

H.E.R. tweeted a picture from Sunday night of the 12-time Grammy nominee, writing, “What a queen.”

Many on Twitter applauded both artists and the celebration of Black women:

Last month, H.E.R. and Sullivan collaborated on a song, “Girl Like Me,” off Sullivan’s new album, “Heaux Tales,” which was released on Jan. 8.