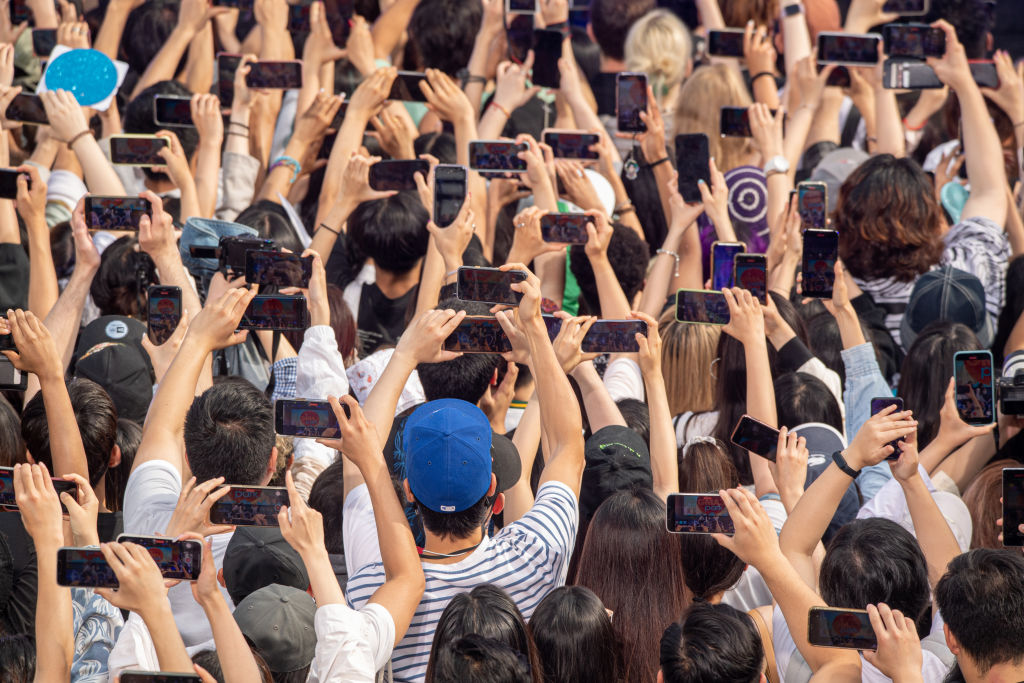 Live music is all encompassing, it’s raw, sometimes emotional and it’s an experience like no other.

When else do you get to see your favourite musician in the flesh, singing songs you’ve listened to for years – or decades, even?

See the gratitude on their faces when hordes of people sing the lyrics they’ve crafted back to them as one, united voice

Or it would be if people weren’t so obsessed with their phones – something that I genuinely believe should be banned from gigs, with no exceptions.

For their latest UK tour, Placebo have ‘kindly’ requested fans to keep their phones in their pockets.

‘It makes Placebo’s performance so much more difficult,’ they said. ‘More difficult to connect with you and to communicate effectively the emotions of the songs.

‘It is also disrespectful to your fellow concert-goers who want to watch the show, not the back of your phone.’

Earlier in the year, the pair hosted an intimate set of concerts where phones were banned. Anyone seen using a device was escorted out by security – and rightly so.

The band encouraged fans to ‘enjoy the experience between band and audience, and be in the moment.’

I wholeheartedly agree. I am so, so sick of seeing the screens of people’s phones instead of my favourite band at gigs.

Watching people’s double-chins illuminated by their screens while they scroll through social media rather than watching the performance.

I’ve been distracted by the haze of blue light in a dark room and have often ended up watching through other people’s screens, instead of immersed by the music I’ve paid to see. It’s infuriating.

It’s rude and it’s disrespectful, both to everyone around you and the band who have poured their heart and soul into writing this music for you – which has been cheapened through you reducing it to a catalogue of poor quality, fuzzy, 30-second sound bites that you’ll never ever watch again.

As if they needed to prove that they were there – sharing it with the world online, instead of being present.

Or the worst – talking loudly or replying to WhatsApps the majority of the gig, before coming alive when a ‘hit’ song comes on, recording it for social media.

I was so infuriated at a gig once by a teenager taking ugly, blurry, unflattering photos of the artist onstage with her digital camera, with a blinding flash and everything, that I asked her to stop.

It made me so irate that I just remember her bad photos and even worse attitude – I couldn’t tell you the songs that artist played. It’s all I think about when I listen back to them now.

In perhaps the most ironic moment I’ve ever experienced, too, at a DJ set on Saturday, a young lad rudely fought his way to the front to post that day’s BeReal.

It was hours late (I should know, it caught me on the loo that morning on a hangover), and he retook it four times.

He’d actually waited for the best moment, and retook it, just to prove that he was ‘a fun guy’. He was being a lot of things that night, but none of them were ‘real’.

As a society, we are utterly obsessed with our online presence that we actually forget to be present – it’s actually quite pathetic when you think about what we’ve reduced ourselves to.

Placebo are right, phones should be banned from gigs. People using devices, other than for emergencies, should be escorted out. No ifs, no buts. It’s disrespectful to the band and your fellow gig goers – as well as to yourself.

Being removed from a gig would help people learn how to just bloody live and just exist in that unique moment – instead of keeping it in a 10,000-strong photo reel, enveloped by cats or squared off photos of your brunch.

At a sit-down Sigur Ros gig I attended years ago, I witnessed even press photographers being escorted out in order to create the perfect listening atmosphere and it was the most immersive, intense and sensual performance I’ve ever experienced.

It’s time to actually be real, instead of being reduced to the judgement of an unimportant follower count, whose worth translates to literally nothing in real life.

Because, honestly, what have you got to prove? And who to? You’re privileged enough to be there, embrace it instead of reducing it to a flurry of pictures and a caption.

There’s literally not a single excuse that you can use to prove me wrong, either. It’s fair, and it’s just.

It’s time to make memories through our eyes and ears, instead of through a screen – picking and choosing the best moment as proof, rather than sharing our passion through words or satisfied silence with friends, family or lovers afterwards.

If music be the food of love, play on – not press record.