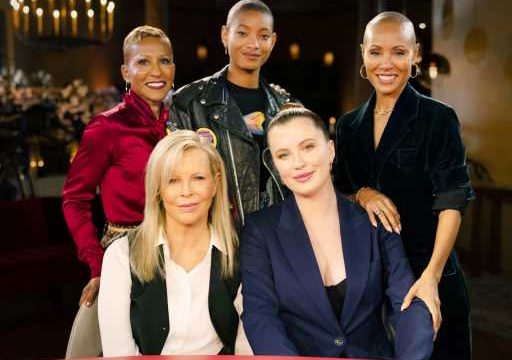 There’s no denying that nepotism in Hollywood exists because we’ve seen plenty of celebrity kids get their foot in the door, thanks to their famous parents. But Ireland Baldwin is revealing on Red Table Talk that there can be a dark side to trying to work in the same industry as her successful parents, Kim Basinger and Alec Baldwin.

In a frank conversation with Willow Smith, Ireland admits that she knows deep down that she wouldn’t have “been scouted as a model if it weren’t for who my parents are.” That pathway to success is nice, but it also brought her a lot of anxiety because of the court of public opinion. “Nothing makes me want to peel my fingernails off more than doing a Basinger-Baldwin spread in a magazine,” she explained. “And then facing the criticism and the comparisons.” The result was bouts of anxiety that the 26-year-old model found “extremely toxic.”

Basinger is not only a former model, but an Oscar winner, so Ireland felt the pressure to live up to that same standard. Even though she suffered from “many body issues, eating disorders” before she launched her modeling career, Ireland discovered that her issues accelerated once she was in the public eye. She questioned herself, “At the beginning of my modeling career, I was like, ‘Why am I even doing this?’”

In 2015, Ireland checked herself into Malibu’s Soba Recovery Center to deal with her anxiety and she even made sure to tell her followers that this had nothing to do with her famous parents — it was about taking control of her life. “Ireland has been through some stressful and negative situations in her life recently and has taken the proactive approach to getting things back on track,” an insider told Entertainment Tonight. “Ireland has the full support of her family and friends who are extremely proud that she has taken matters into her own hands as the strong woman that she is.”

Ireland came through that experience stronger than ever — and she is an open book about how anxiety affects her life and how she can now manage it in a healthy way.

Before you go, click here to see stars who have been open about their struggles with depression.