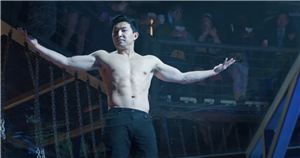 The Ten Rings might have given Wenwu his legendary power, but the newest trailer for Shang-Chi and the Legend of the Ten Rings is giving us life. The film sees skilled martial artist Shang-Chi as he gets pulled back into the fold of the notorious Ten Rings organization and confronts the legacy of his father and the organization’s leader, Wenwu. The trailers have included a few Easter eggs for fans of the MCU — the Ten Rings organization was first mentioned in Iron Man, and there seems to be an appearance from both The Incredible Hulk‘s Abomination and Doctor Strange‘s Wong. They’ve also got plenty for fans of Simu Liu — we see you, perfectly timed shirtless shots.

Shang-Chi and the Legend of the Ten Rings is Marvel’s first film with an Asian lead. “I never saw myself as the hero of my own story growing up. I struggled to find any Asian characters onscreen, and there were fewer still that made me feel truly proud of my heritage,” star Liu said of the film in an Instagram post on April 19. “It’s absolutely insane to think that in just over four months, we will have a @MarvelStudios movie featuring an almost ENTIRELY Asian cast, each full of rich nuance and dimensionality.” The film also stars Tony Leung as Wenwu/the Mandarin, Awkwafina as Katy, Fala Chen as Jiang Li, Meng’er Zhang as Xialing, Florian Munteanu as Razor Fist, Ronny Chieng as Jon Jon, and Michelle Yeoh as Jiang Nan. You can, as Liu said, “make history” when the film premieres on Sept. 3.

Shang-Chi and the Legend of the Ten Rings Official Teaser