LONDON — I’ll say this for the pandemic: It’s brought acting talent together — and into your living room — in ways that might not have seemed possible previously. That sense was probably shared by many on a Sunday night in November when Ian McKellen, Derek Jacobi, Maggie Smith and Judi Dench participated in a Zoom event titled “One Knight Only,” which was facilitated by another, younger member of Britain’s acting nobility, Kenneth Branagh.

There, sharing a single screen, were four octogenarians — each a knight or a dame and a winner of Tony and Olivier Awards and heaven knows how many other accolades. Gathered for an online conversation in aid of charity, the quartet embodied a lifelong devotion to the theater that has found time for screen renown as well. The realization that the pandemic and advancing age have significantly reduced the already scarce opportunities to see these actors onstage again gave the occasion an underlying piquancy.

How glorious, then, to clock their interplay, McKellen taking the reins as a raconteur, with a puckish Jacobi, nattily dressed, not far behind. Dench leaned into the screen as if Zoom were some inconvenience keeping her from sharing an actual space with friends, while Smith, notably more reticent, seemed to pull back from her screen. The conversation ranged from life during lockdown (McKellen has been painting) to their attitude toward critics and on to embarrassing onstage moments and roles they might like to play now. “Anything,” Dench said. “I would be pleased to be cast in anything.”

All four belong to a tradition in British acting where theater was what you did and anything else was a happy add-on. Smith, alone among them, won the first of two Oscars (for “The Prime of Miss Jean Brodie”) when still in her 30s, while the others took far longer to become known overseas the way they had long been at home. Whether in college and drama school or covering the expanse of Britain’s once-storied network of regional theaters, these players cut their teeth on theater and waited for the screen to recognize the gifts already well known to live audiences. (More than once I have taken a seat aboard a trans-Atlantic flight only to find a smiling McKellen on video, advising me on in-flight protocol.)

Whether as Gandalf, the stammering Roman ruler Claudius or the tart-tongued Dowager Countess in “Downton Abbey,” McKellen, Jacobi and Smith, respectively, boast screen roles with which they will forever be associated, especially for those who haven’t seen them chart a course across the classics, and many a new play as well, onstage. (Smith’s Professor McGonagall in the “Harry Potter” movies found her a following among preteens, too.) More people probably saw Dench’s inimitably brisk M during just one of the weekends her seven Bond films were in cinemas (she also made a cameo in an eighth) than saw her onstage during a theater career spanning 60 years and counting. 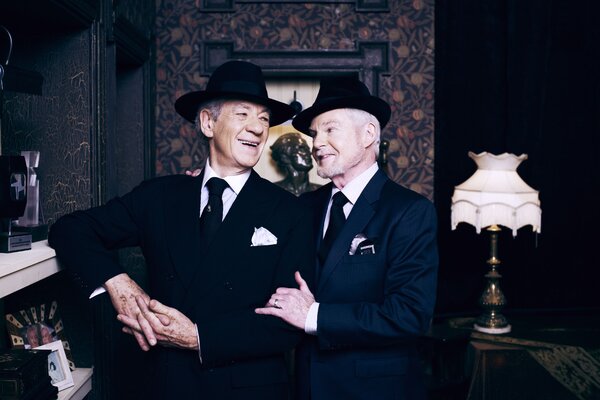 The joy of hearing their reminiscences came with an appreciation of how often these actors’ lives and work have overlapped: Think of them as a continuing Venn diagram from the start. McKellen and Jacobi acted together as students at Cambridge, where McKellen has spoken of harboring a crush on his classmate. The pair reunited a half-century later as the waspish elderly couple in the British sitcom “Vicious.” Jacobi and Smith were integral to the early glory days of the National Theater under Laurence Olivier, and McKellen and Dench played the Macbeths for the Royal Shakespeare Company in a 1976 production that exists on disc and is still spoken of in reverential tones.

Dench and Smith, longtime friends, have appeared several times together onscreen, in “Tea With Mussolini” and “A Room with a View” among other titles, and in 2002 made up the entire cast of the David Hare play “The Breath of Life.”

Surely, there are plenty of younger actors who are no less committed to the stage, and as we saw at this year’s Golden Globe awards, there’s a direct path in Britain from theater training to screen acclaim. Jude Law is a star who loves the theater, as are Benedict Cumberbatch (TV’s “Sherlock”) and George Mackay (the fast-ascending leading man from “1917”).

The difference has to do with career paths that no longer require, or even suggest, the lengthy apprenticeship in Britain’s flagship subsidized theaters — the RSC and the National — that gave these senior practitioners an established perch early on. An actor nowadays may do a play or two only to be siphoned away to TV and film. Some return a fair amount (Matt Smith, a former and popular Doctor Who, is one example), whereas others vanish from in-person view: When’s the last time you could see Colin Firth in a play? Not since 1999, when he starred in Richard Greenberg’s “Three Days of Rain” at the Donmar Warehouse here.

By contrast, McKellen even now is visibly rejuvenated whenever he takes to the boards. In 2019, he toured a physically demanding one-man show the length and breadth of Britain (and for one night in New York) to mark his 80th birthday, and he has begun work on an age-inappropriate stage production of “Hamlet” that was put on hold by the coronavirus. Attending a Sunday matinee of the solo show, I was especially moved by his presence directly afterward in the lobby of the theater. Energy undimmed, he seemed ready to engage his public in chat well into the night.

That same year found Smith onstage for the first time in 12 years not in the more-anticipated realms, perhaps, of Wilde or Coward but going it alone as Goebbels’s secretary, Brunhilde Pomsel, in “A German Life,” a bravura solo performance that by rights should travel to New York. (The plan now is to adapt the play into a film.) Dench has spoken candidly of her waning eyesight due to macular degeneration and her desire to nonetheless carry on acting. How exciting it would be to see her once again on a London stage, perhaps as the agelessly witty and worldly grandmother in “A Little Night Music,” a musical in which she once played that same character’s daughter, Desiree.

Dench and Smith were part of a separate, scarcely less distinguished quartet when they joined Eileen Atkins and Joan Plowright in “Tea With the Dames” (called “Nothing Like a Dame” in Britain), a lovely documentary that was aired in the United States in 2018 and lets the camera roll as the four great ladies of the stage take stock, gossip and reflect. To see this generation of talent in any iteration is to applaud their longevity while pausing to note the inevitable passing of a collective kinship with the stage that will live on well after it’s no longer possible to enjoy their talents in person.