If reality television is a game, Bethenny Frankel belongs among its M.V.P.s

Frankel, 50, began her on-camera career in 2005, during the Martha Stewart season of “The Apprentice.” She came in second, with Stewart telling her, “You’re spunky, you’re a show-off, you feel you have to make a physical impression.”

If that made Frankel wrong for Martha Stewart Living Omnimedia, it made her right for “The Real Housewives of New York City,” which premiered in 2008, even though she wasn’t a housewife then and has never really been one since.

Frankel spun a tossed off cocktail order in Season 1 — “the skinny girl’s margarita” — into the premixed cocktail brand Skinnygirl. She sold it to Beam Global for $100 million in 2011, retaining her rights to the brand name. (Beam got the premixed drinks business; Frankel kept everything else.) She has since parlayed her reality fame into food stuffs, supplements, cookware, shapewear and under her Bethenny label, eyewear.

She is, in her words, “the H.B.I.C. of a major empire.” She recently signed a multiyear deal with iHeart Radio to bring her “Just B with Bethenny Frankel” podcast to the network and to produce others.

Her endemic hustle extends to the disaster-relief initiative, B Strong. While raising money for hurricane and earthquake relief, the initiative, in partnership with Global Empowerment Mission, has distributed more than $19 million in aid and personal protective equipment during the Covid-19 crisis. 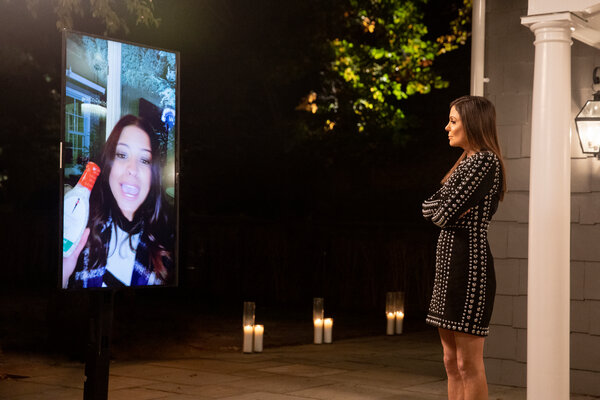 On television, Frankel used “The Real Housewives” as a vaulting horse toward a couple of Bravo spinoffs; a single season of a syndicated talk show, “Bethenny”; and a bunch of appearances on “Shark Tank.” She quit “The Real Housewives” in August 2019 after eight on-and-off seasons, citing spiritual corrosion.

“I was making great money, but I didn’t feel good about it,” she said. “If I’m really as successful and smart and savvy and legit and the-Emperor-does-have-clothes as I think I am, then that’s not really where I should be anymore.”

But she didn’t stay away from reality television long. She teamed with Mark Burnett (“The Apprentice,” “Survivor”) and MGM Studios to create “The Big Shot with Bethenny.” “In business and television she is a clear force of nature, deservedly so,” Burnett wrote in an email.

In “The Big Shot,” premiering April 29 on HBO Max, millennial strivers attempt to become Frankel’s vice president of operations at Skinnygirl. Nominally a business competition show, it dispenses with most hallmarks of the genre — imagine “The Apprentice” with 100 percent more entropy.

“I can let two people go. Hire everybody. Fire everybody,” Frankel says in the first episode. “I can do whatever I want.”

On a recent afternoon, Frankel arrived at a Soho loft where some of the show was shot — lipped, lashed, bronzed, glamorous even through the Zoom screen. During an hourlong interview, she discussed entrepreneurship, her Martha Stewart beef and how to make reality TV more real. These are edited excerpts from the conversation.

How did you end up on “The Apprentice” in the first place?

I’d never watched a ton of television, but I said, “I could get on ‘The Apprentice.’” I said to my partner, “Go buy the least expensive video camera you can find and just videotape me selling cookies.” I got called, which was the craziest thing of my life, and I went to Bloomingdale’s and used my credit card to buy a Moschino red jacket. I went to this hotel, they interviewed me. I didn’t make it. But I’ve always been a connector, like, follow through, send a card, send a gift. Connect. So I kept in touch with the same producers and casting directors without looking too desperate. And they said, “OK, now it’s the Martha Stewart ‘Apprentice,’ here’s your chance.” I wanted it more than anything in the world. I didn’t want the fame per se. I wanted the job.

You made it to the finale, then lost. Do you feel like you were robbed?

I ran into Martha Stewart shortly after. I was wearing a really sexy dress. Intentionally. She was standing next to Jon Bon Jovi. And she said to him: “This is Bethenny, she was just on my show. And she’s mad at me because she didn’t win.” And I said: “Martha, I’m not mad at you. You’re like an ex-boyfriend that I hate but I’m still in love with.”

Then you went onto other reality shows, “Housewives,” the Bravo spinoffs, “Shark Tank,” “Skating With the Stars.” How do people who know you only from TV see you?

What do we get wrong? What don’t we see?

What people probably don’t realize or believe is I am the most private person that I know, which is the craziest irony. I’m private about moments and experiences. I’m more of a homebody than anybody that I know, short of someone being agoraphobic. I do not leave my house and I do not put on hair and makeup unless I’m being paid to.

Few people have used reality TV as successfully as you have. Was that always your plan?

I wanted a second in command. The people at MGM wanted the title because the audience can digest and understand the title. What I really needed in my business was my person, who can think like me, manage the shop like me, edit a social post, have a vision.

Is a reality show the best way to find that person?

I’ve never looked at a résumé, ever. Headhunters give you people that are like, “Next Tuesday, I have a doctor’s appointment, and two years from July, I need to take a three-week trip, and what time is my lunch break?” I didn’t come up that way. We just worked. It’s hard to find people like that. That’s who I go for. I don’t care if you know anything — you’re loyal and you’re smart and you work hard. That is all you need.

People competing for a job on a reality show sounds a lot like “The Apprentice.”

Initially, I wanted to be disassociated from “The Apprentice.” It’s not real. It’s manufactured. Everything going on with our projects was really going on. So for example, I really have a shapewear brand; we really had to create a campaign for it. That was really happening. I really have salad dressings and preserves. The built-in projects are real; they have real stakes. Also, when you watch “The Apprentice,” do you ever see him in his pajamas? You ever see him at home with his wife? I imagine Donald Trump eats cereal. Do we see that? No. Do you see me in my life? Yes. The authentic modern version of “The Apprentice,” that’s what this really is.

“The Apprentice” has a very predictable structure. Watching your show, I had no idea what would happen.

Our executive producer produced “America’s Top Model.” Mark Burnett has produced “The Apprentice,” “Shark Tank,” “Survivor.” I get that they feel safety in format. I feel trapped and suffocated by it. Like, I’m back on my talk show directing traffic between a soufflé and fall florals. On my own reality shows and on the “Housewives,” I would say, “Let’s do real.” So all of the things that are shocking are not contrived. There were so many things not planned. It’s a very different show for that reason because it’s based in authenticity.

So without too many spoilers, did it work out? Did you get your person?

This experience gave me the person and I’m so excited.

What have you learned about being good at being on television?