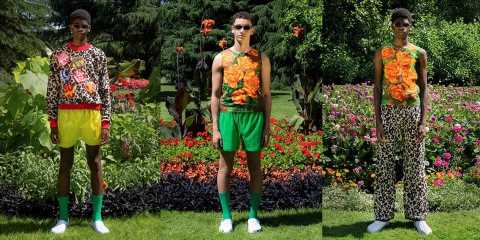 British designer Adam Jones — who HYPEBEAST recently interviewed alongside other “artwear” designers — is back with his “Summer of 21” collection.

As always, Jones is inspired by the past, but for this collection, he looks more specifically to 1969. Speaking on this, Jones said:

“In 1969, the Boeing 747 makes its first-ever commercial flight, people were really beginning to travel regularly, Neil Armstrong walked on the Moon, David Bowie released Space Oddity, Monty Python aired on BBC, life was exciting both outdoors and indoors, you could also go out and buy a lion or a lemur to keep as a pet. John Rendall and Anthony “Ace” Bourke famously bought Christian the lion at Harrods, who they would chauffeur around West London in their hatchback Mercedes, but I’m sure they were then going home to watch Cilla on the telly, with a can of Skol, I love this contrast. This year was a time when outdoors and indoors were both vying for your attention, much like the past year, do we go and get p*ssed in the park or watch that new Netflix series[?]“

With this in mind, “Summer of 21” is much like the summer of ‘69, in a way that reflects the era of a “Swinging London,” a time when everything changed for young people in the U.K. as the world of fashion as we know it today boomed with pieces from — as Jones notes — Mary Quant and BIBA.

For Jones’ collection, positivity and the golden era of change inspire “Summer of 21.” 12 looks comprised of 18 pieces made from his signature materials — vintage tea towels, blankets, bar towels and ribbons — can be found in the collection, but in a fashion much louder than ever before.

Towels advertising Ricard — “an exotic aperitif in the 1960s” — have been used to make the designer’s signature beer towel grandad vest, while other standouts include the leopard print toweling jumper that’s been appliquéd with mock beer mats made from offcuts of the toweling used for the aforementioned vest. Elsewhere, rose motifs inspired by traditional British grandma wallpaper or perhaps Only Fools and Horses adorn more vest, while more leopard print has been used for a pair of trousers.

The lookbook — which was shot in Greenwich Park Rose Garden where Jones spent lots of his time this summer — can be seen above, while the collection can be purchased exclusively from APOC Store now.