Light is important in any dance, but in Mayfield Brooks’s latest, the right lighting is everything. “The light at 1 p.m. is when we want it,” said the choreographer, bathed in a morning glow during a recent video interview.

While working on “Whale Fall,” a video piece filmed in the Experimental Theater at Abrons Arts Center, Brooks, who uses the pronouns they and them, made a discovery. “I’ve been in this theater so many times, but the windows are always blacked out,” they said. “I basically started being here as much as possible and watching the light as it changed. So part of the piece is that I enter at a time when the light is coming through the windows.”

That one stream of light was the “thing that calmed me down,” Brooks said. “I was working through the grief of this moment and of this emptiness I have been feeling as an artist of having to be alone in this kind of siloed existence.”

With a laugh, Brooks added, “And then the light goes away.” 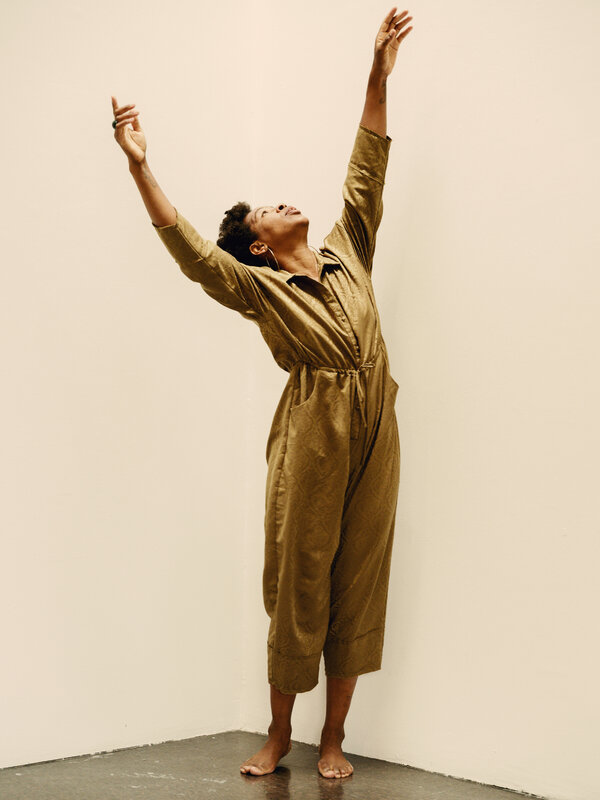 Yet Brooks’s “Whale Fall,” available Thursday through Saturday on the Abrons website, is more about darkness than light. A rich and poetic exploration of grief, it is set in a barren theater with no theatrical frills. Brooks, who “surrendered to the ordinariness of everything around me,” they said, uses the objects in the theater as choreographic tools; they push a piano, they balance over risers. There is a duet with curtains.

The piece was developed in part at a residency in Cape Cod, where Brooks recorded ocean sounds — which they found echoes of in the theater. “All of these objects in the space created sounds, and the sounds were similar to what I was listening to when I was listening to the whale sounds,” said Brooks, adding: “The idea of being quarantined in the space reminded me of Jonah in the belly of the whale.”

Breath and voice, whether a whisper or a wail, are also palpable instruments in “Whale Fall.” And Brooks, in full-body shots and close-ups, staggers and spins within the hazy light — at times, seeming to float. Their spine is supple, but their body is grounded. You sense that the whale, at one point a land mammal, is somewhere inside of Brooks’s magnetic form.

The soundscape score creates the sensation of being in the ocean and, as it progresses, falling within its depths. And, yes, the theater gets darker and darker, which is fitting: Brooks was inspired by a whale fall, a term that describes how a whale, after it dies, sinks to the ocean floor; there, its carcass supplies deepwater creatures with nutrients, so that even in death, it feeds the ocean.

For the film, a collaboration with the composer Everett Saunders and the cinematographer Suzi Sadler, Brooks was also thinking about “Moby-Dick.” But the major focus was the Black body throughout history.

Whales, “because of their blubber, carry all these toxins,” Brooks said. “There’s this whole other aspect to it that brought me to how so many Black bodies were dying from Covid and the amount of toxins that Black bodies carry, whether it’s from trauma or living near brownfields or the cost of poverty. I started feeling that the whale body is very similar to the Black body.”

For Ali Rosa-Salas, the director of programming at Abrons, a virtual work has its advantages with such somber subject matter: The viewer is in charge. “You can pause when necessary, you can play, you can come back to it,” she said. “Processing grief and all the feelings that are to emerge associated with what Mayfield’s research is going to bring up necessitates a slowness.”

Brooks, who calls their practice Improvising While Black, an umbrella that encompasses their teaching as well as choreography and dancing, finds connections between “Whale Fall” and “Letters to Marsha,” a previous work based on danced and written notes to Marsha P. Johnson, the transgender activist whose body was found in the Hudson River in 1992.

“I think a lot about her body in the Hudson River and the cellular kind of existence of bodies in water,” Brooks said. “How even if the body disintegrates, the cells can still survive” and the idea that “her molecular structure may have communed with some of the whales that showed up in the bay last year.”

Recently Brooks, 50, spoke about the solitary life of an artist during the pandemic, the Black body, whales and, somehow, the point of it all: that in decomposition, there is life. Here are edited excerpts from that interview.

You’ve spoken about how you like to create an imaginary space. Why is it so important?

There’s so much trying to pull at our imaginations — there’s so much information, there’s so much distraction. And to kind of quarantine myself in this space was really nice because I was feeling some despair around creative process.

Part of your idea around “Whale Fall” has to do with what you’ve referred to as decomposing the show. What does that mean?

I was in Munich working with 22 artists under the direction of Meg Stuart. And then I came back — five days later, I’m sick with Covid, and I knew it because I lost my taste and smell.

In the first two months, everything was locked down, and I just felt like my body was decomposing, but in a more anaerobic way. There was just like no air flowing.

And how did you decompose the piece?

What has life during the pandemic been like for you?

I think more than anything else, this time has been for me a contemplative dive into what it means to just be constantly faced with death. There’s been so much Black death this year. I mean all the way back to Trayvon Martin. And to be in the middle of a pandemic where the numbers of Black people dying are the highest, and then to have this extremely traumatizing record of a literal lynching of George Floyd.

Part of what I was going through with this piece is just trying to figure out what is this? What is going on with this death?

What do you want to express?

I want to find ways to be in an awareness of how Black death is a quotidian thing. It’s happening all the time, but, also, what does it mean when the bodies pile up? Do we get to decompose this trauma? Do we get to grieve it without it being a spectacle?

How does that connect with the whales?

Maybe the whales are teaching us something about holding the toxicity and the pollution of the human problem of waste and climate change. When something is rotten to the core, how do we get inside of it and then try and work toward a whale fall?

How did you learn about a whale fall?

In September, there were almost 400 pilot whales that beached themselves off the coast of Tasmania. And then it happened again in Sri Lanka. At that point, I was so exhausted. The protests had been happening in Brooklyn right outside my door. I felt so numb. I was so moved by the story of these whales. I couldn’t really find an answer as to why they beach themselves, but I found the phenomenon of the whale fall. And the story of these whales brought me to my emotions again.