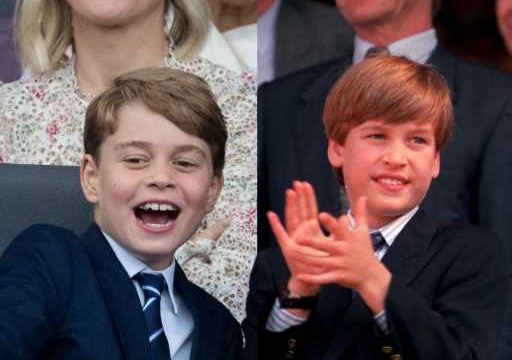 Time has gone by so quickly. It feels like yesterday we were all marveling that Kate Middleton and Prince William welcomed their firstborn son Prince George into the world. Now, George is already nine years old! At only nine, George has seen and done so much! And it’s quite clear who his biggest influence is: his lookalike dad William.

George has already taken a passion for the environment, doing bake sales and watching nature documentaries with his dad. The father-son duo has so much in common, from helicopters to sporting events like Wimbledon. But not only is George following in William’s philanthropic footsteps, but he’s looking more and more like him every day!

You’re lying if you haven’t seen the uncanny resemblance between George and William when he was a kid. Along with being a total “daddy’s boy,” he’s an eerily similar lookalike to the future king.

From their Wimbledon debut outfits to their first day of school photo-ops, many photos prove how much the father-son duo looks like one another. Prepare to get spooked by how similar they look (even more so than Princess Charlotte and her lookalike grandmother Princess Diana)!

In honor of the Prince’s ninth birthday, let’s check out the best-lookalike photos of William and his son George throughout the years below!