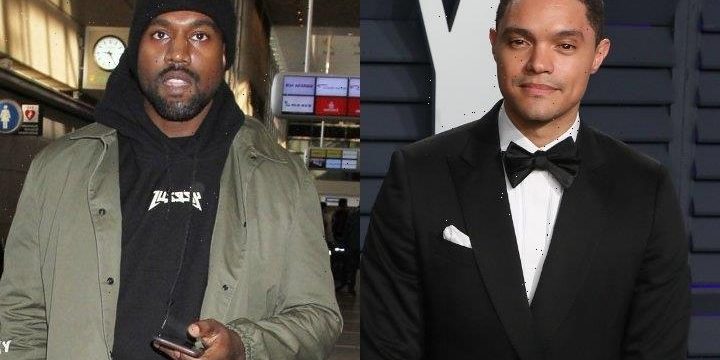 Instead of firing back at the Yeezy designer, ‘The Daily Show with Trevor Noah’ host responds to the former’s attack by showing how much the rapper has inspired him in some aspects.

AceShowbiz -Fans love how Trevor Noah handled Kanye West‘s online attack against him. After giving such a “classy” response to the rapper’s racial slur, “The Daily Show with Trevor Noah” earned praise from many online users.

The post didn’t go unnoticed by Trevor, who managed to leave a lengthy message in the comment section before Kanye’s account got suspended. “There are few artists who have had more of an impact on me than you Ye. You took samples and turned them into symphonies,” Trevor stated. “You took your pain and through the wire turned it into performance perfection.”

“I thought differently about how I spend my money because of you, I learned to protect my child-like creativity from grown thoughts because of you, s**t I still smile every time I put on my seatbelt because of you,” the South African native added. “You’re an indelible part of my life Ye. Which is why it breaks my heart to see you like this.”

“I don’t care if you support [Donald Trump] and I don’t care if you roast Pete. I do however care when I see you on a path that’s dangerously close to peril and pain,” he continued. “Oh, and as for K**n…clearly some people graduate but we still stupid.

“Don’t ever forget, the biggest trick racists ever played on black people was teaching us to strip each other of our blackness whenever we disagree,” the comedian went on explaining. “Tricking us into dividing ourselves up into splinters so that we would never unite into a powerful rod.”

Many have since applauded Trevor for his “well-said” statements. “I love Trevor.. that was classy,” one person in particular gushed. “Trevor Noah always speaks so eloquently, with truth and humor. Love him and he absolutely spoke the truth here!” another added, while a third chimed in, “Wow EXACTlY! Well put. We can love ye but be disappointed in his actions. He’s HUMAN as are we.”