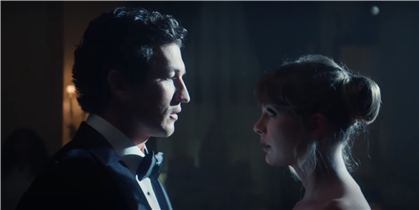 A different kind of red wedding.

Taylor Swift teamed up with pal Blake Lively for the "I Bet You Think About Me (Taylor's Version)" music video, which marks Lively's directorial debut.

The wedding-set video follows a groom (played by Miles Teller) as he confronts thoughts of his disgruntled ex (Swift), a mischievous specter at the reception appearing in a series of bright red outfits.

At one point in the video, Swift transforms into Teller's bride, emerging on the dance floor in a strapless ballgown with a voluminous train decorated with tulle rosettes. After Swift and Teller share a first dance, the singer's gown pulls a Sleeping Beauty and changes color, shifting from white to (you guessed it!) a cherry red hue.

Like "All Too Well," fans have speculated that "I Bet You Think About Me" is about Swift's movie star ex, Jake Gyllenhaal. While mentions of an ex who "grew up in a silver spoon gated community" and owns "organic shoes" and a "million dollar couch" do seem to fit the Gyllenhaal bill, the visual of a red-attired Swift gifting Teller's bride a scarf at the wedding is harder to ignore.

"The reddest video EVER is out now," Swift captioned an Instagram clip from the video, which features the singer demolishing etiquette with a fistful of red velvet wedding cake. "Directed by @blakelively who SMASHED it just like I smashed this cake."