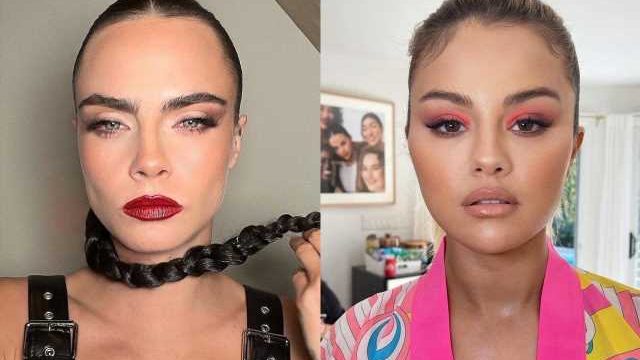 The ‘Only Murders in the Building’ actress is spotted planting a kiss on the ‘Suicide Squad’ star’s cheek when they hang out in Madison Square Garden, New York.

AceShowbiz –Selena Gomez and Cara Delevingne got in some PDA during their night out. The “Come & Get It” songstress was caught planting a smooch on the “Valerian and the City of a Thousand Planets” actress’ cheek when they watched the Knicks versus the Orlando Magic.

On Wednesday night, November 17, the 29-year-old singer/actress and the supermodel were spotted hanging out in Madison Square Garden, New York. After people noticed their attendance as they were captured by the jumbotron, the “Rare” artist leaned over and kissed the “Suicide Squad” star’s cheek. The English model then blew out a kiss to the camera and hid her face in her elbow.

Selena and Cara have been friends for years, with there being rumors of romance in 2015 due to how much time they spent together. In the wake of the dating rumors, Selena admitted that she liked the buzz.

“Honestly, I loved it,” Selena added. “I didn’t mind it, especially because they weren’t talking about other people in my life for once, which was wonderful.” The “Only Murders in the Building” star then said of Cara, “Honestly, though, she’s incredible and very open and she just makes me open. She’s so fun and she’s just extremely adventurous, and sometimes I just want that in my life, so I didn’t mind it. I loved it.”

While Cara is currently single, there’s an internet conspiracy theory claiming that Selena is dating Chris Evans. Last week, when Selena was in attendance at Taylor Swift‘s “Saturday Night Live” performance, Taylor shared a TikTok video in which Selena was seen wearing a white cable knit sweater that looked a lot like the one the “Avengers: Endgame” star wore in the film “Knives Out“.

Selena, who once admitted that she has a crush on Chris, was rumored to be an item with the actor after fans noticed the Captain America depicter in Marvel Cinematic Universe followed her on Instagram. Fans also believed that the actor is currently dating a musician as he often shares a video of him playing piano lately.

In one of his piano videos, fans caught a brunette’s reflection in the lower-left corner of the footage. A TikTok user, under the username @girlgangz773, reposted the clip with the caption, “Is that Selena?!” In the footage, the fan zoomed in on a possible reflection on the piano, writing, “Whose [sic] the brunette filming bottom right corner Chris?”

Fans also speculated that the two are dating after some photos of their sightings circulated online. In images circulating online, the “Spring Breakers” star and the “Defending Jacob” actor were photographed leaving the same restaurant on a separate occasion. However, some fans argued that the sightings might have been photoshopped.