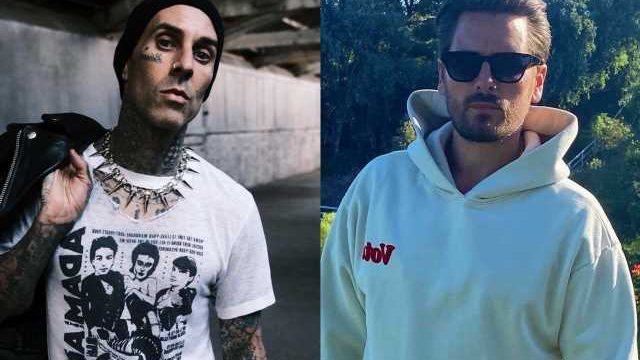 The ‘Flip It Like Disick’ star still isn’t a fan of the Blink-182 drummer even though they were recently spotted attending a baseball game together for Scott and Kourtney’s son Reign.

AceShowbiz –Travis Barker apparent hasn’t got a seal of approval from Kourtney Kardashian‘s ex and baby daddy Scott Disick. Despite their recent outing, Scott allegedly “can’t stand being around” the rock star.

A source spills to Us Weekly that the New York native still isn’t a fan of the Blink-182 drummer even though they were spotted attending a baseball game together for Scott and Kourtney’s son Reign. “[Scott] can’t stand being around him,” the insider says, adding that Scott “despises Travis.”

Despite that, he’s reportedly attempting to put the drama aside for his son. “Scott adores his kids and would do anything to make them happy,” the source continues. They “are not on friendly terms” and usually only hang out “because the kids are around.”

The “rare occasion” where Scott and Travis spent time together happened on Sunday, March 20. The Talentless cofounder and the musician were seen cheering on Reign during the game.

Scott, who dated Kourtney on-and-off for almost a decade before splitting for good in 2015, allegedly “wishes things were different” between him and his ex. “He feels like Kourtney was the one that got away and [he] still can’t wrap his head around the fact that they’re getting married soon,” the source claims. “He feels like he’s not going to find someone like Kourtney.”

The insider adds that the “Flip It Like Disick” star still has “love for Kourtney. It’s going to take time for him to fully accept Travis is The One for her.”

Meanwhile, Kourtney and Travis’ wedding are believed to be fast approaching. Rumors had it, the Poosh mogul and her fiance were planning “a very small wedding.” A source told PEOPLE last month, “There are two weekends she’s looking at in May. They don’t want it to be a press frenzy. She wants it very private with closest friends and family.”