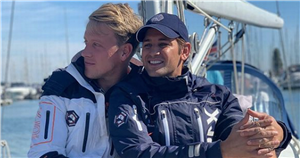 Ollie Locke and his husband Gareth Locke are longing to be parents, but they recently announced their attempt at IVF via a surrogate hadn’t been successful.

Speaking to Frankie Bridge, 32, on her podcast Open Mind, Ollie, 34, reflects as he says it was the most "heartbreaking" situation that he has ever gone through.

Frankie began by saying to Ollie: "You guys have started that [surrogacy] journey haven’t you? But the first attempt didn’t work.

"And you’ve said how heartbreaking and how difficult that was. That must have been really tough, to have made that decision, be really excited and then for the first attempt not to happen?"

Ollie replied: "If I’m completely honest I think we were naïve. I think we expected everything to go right.

"But as you, as any woman in Britain knows, getting pregnant isn’t an easy thing for a lot of people. And we just joined that community of people that do struggle to have children the first time. And it was and is the most heart-breaking thing that ever happened to me."

Ollie went on to express how he regrets the moment of him and Gareth receiving their bad news while on Made in Chelsea.

"We were silly to think it would happen the first time and it didn’t. And what was stupid, what was another stupid decision of mine which hasn’t been aired yet was that we did it on [Made in] Chelsea," he added.

"We found out whilst on Made In Chelsea. And so episode one of the next series there is a beyond horrific scene that we did where we sit there with a surrogate on the phone and suddenly she goes, 'It didn’t work.'"

Ollie remains hopeful though, as he recently revealed the support he and Gareth have had has been amazing along the way.

"Everyone joins this one community where we’re all in the same boat together,” he told OK! of couples trying to conceive, before explaining: "It’s lovely to have a community around us.

"Joining a community of people who are also struggling to have children is lovely. It’s weirdly lovely to be a part of it as everyone helps each other. It’s nice because, in that environment, no one is famous or in the public eye."

In the same chat, Ollie revealed he and husband Gareth, 31, were one of the last couples to say “I do” in Britain when they got married before the second national lockdown in December.

The Chelsea favourite then said: "The reality is, I was so exhausted after filming [the wedding for a Made In Chelsea special] from 9am until 12.45am.

"Once we finished filming, I went home and watched David Attenborough in bed! We weren’t allowed a reception so we had Zoom calls with everyone."

For all your updates on Ollie Locke, sign up to our daily OK! newsletter.