Crack your knuckles and rub those palms together, artists and music-loving onlookers. Here comes one of the biggest buzzwords of the past decade in record label antics: Transparency!

Last year, when it was impossible to tour and ridiculously tough to nab a record deal, Stem — the music distribution and payment platform that launched in 2015 and is now facilitating Drake and Justin Timberlake collaborations for the likes of Brent Faiyaz and Justine Skye, respectively — started offering independent musicians advances based on their net income. And, unlike a traditional record label, it did so without asking for a percentage of ownership in return. Stem is about to unveil a new tool for the tracking and recouping of expenses, executives tell Rolling Stone: On Thursday, August 26th, Stem will expand its refreshingly transparent, artist-centric dashboard with the addition of Recoup Rules.

And the First Streaming Service to Partner With TikTok Is…

The Private Lives of Liza Minnelli (The Rainbow Ends Here)

The Beatles in India: 16 Things You Didn't Know

As the much-quoted proverb goes, you’ve got to spend money to make money — but in music, artists have to constantly track dozens, if not hundreds, of individual costs and revenue streams in order to expand their music careers, and it’s a glorious headache for any musician without a salaried business team or an M.B.A. (As an example: Under current copyright rules, artists can collect live performance royalties from songs played in concert, but it requires someone going out of their way to report those shows to a performing rights organization and send out setlists of all the unique songs played, every night.)

The fact that artists have so much to consider when organizing their finances is “exactly why” Stem created its new tool, which lets artists track all sorts of external earnings that Stem is not involved in, company CEO and co-founder Milana Rabkin Lewis tells Rolling Stone on the phone from her Sherman Oaks, California home.

“Anyone can start a label today — and yet there are no tools to support the small and medium-sized businesses in this industry,” she says, not incorrectly. “Everything was built for the enterprise. And the reason we’re not seeing this level of transparency from Sony, Warner, and their subsidiaries — and even Universal — is because their plumbing, or the technology they’re using, was built for a physical world. That worked when there were 40,000 songs released a year. Today, there are 60,000 released a day.”

While Stem just touches the recorded music that goes through its platform, Rabkin Lewis’ team feels that artists and their songwriters, producers, and other collaborators need to know about all the ingredients that go into the pie, before deciding how big their slice should be. When it comes to recouping costs, there are often other revenue streams — things like sync opportunities, publishing, and endorsement deals — that go towards paying back recoupable expenses. “We built a software so flexible that it can accommodate for revenue that Stem doesn’t normally touch,” she says. “It just makes the whole process more seamless.” Rabkin Lewis mentions that she’s looked at Square and Venmo’s interfaces for inspiration. (It’s worth noting that Venmo’s former COO, Michael Vaughan, is an investor in Stem.) 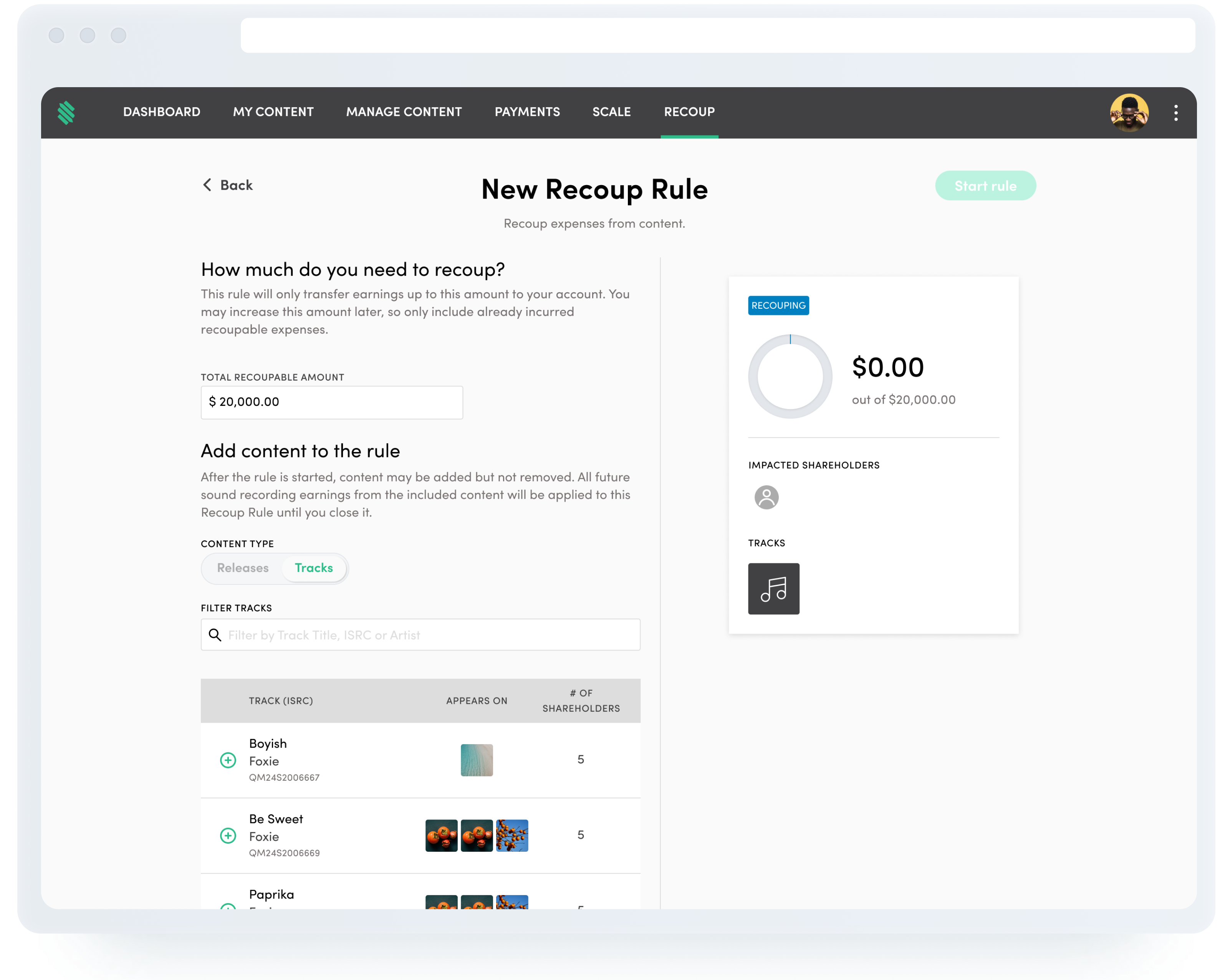 What it looks like to create a “Recoup Rule”

Stem isn’t the first young, digital-first company to place the idea of transparency firmly at the core of its mission. Kobalt has been at the forefront of this on the publishing side for years, while DistroKid and CreateSafe both made headlines for their own masters-specific tech that they developed during quarantine times. But Stem is taking more of a big-picture look at the careers of today’s multi-faceted artists, according to Rabkin Lewis.

User-friendliness is also key to Recoup Rules. “Most of the accounting software out there is very enterprise-grade,” she says, acknowledging the existence of “tons of” music-focused tech already on the scene, such as that of Counterpoint Systems. “It’s meant to be used by a finance person or an accountant. We, however, built an interface — with the calculations all happening on the backend — that’s meant to be used by anyone who’s part of the management team or label. As with all of the products we approach, we went, ‘How do we demystify the complexities and make something so simple that an intern can use it, even though it still does all the powerful calculation and work that needs to be done?’”

Recoup Rules also lets its users recoup expenses before splits are paid out. “When an artist is really growing their business, there are costs — recording costs, production costs, marketing costs, advertising costs, touring costs if it’s a 360 deal — that add up. If someone is putting up the money, whether it’s the manager, the artist, their parents, or the independent label that’s using Stem for distribution, that person wants to see money recouped before other people get a piece of the net profits,” she notes.

When Stem was first getting started, the team quickly noticed a trend amongst clients: The person doing the uploading of the content was setting their split at 100 percent and then paying out all involved parties later in an unofficial, privately monitored, or disorganized manner. “That bummed us out,” Rabkin Lewis says. Now, when these people are added as shareholders, they get their own log-ins to access a dashboard that tracks streaming data, as well as revenue-based marketing data that can broken down by streaming platform and geographic region, and separated into ad-supported or subscription-based categories.

Rabkin Lewis believes in peeling back the curtain in music’s money system, and hopes Stem’s new feature can be an integral part of that. The shareholders, she says, will be regularly updated on the status of the recoupment process via notifications and emails. “For the first time, [they] are part of the process and in the know. Traditionally, that producer/songwriter doesn’t get reported to for a long time. Or they’ll get some PDF statement that’s really hard to read and understand — and that’s why you have so many people complaining about not seeing money and not knowing when they’ll see a dime.” 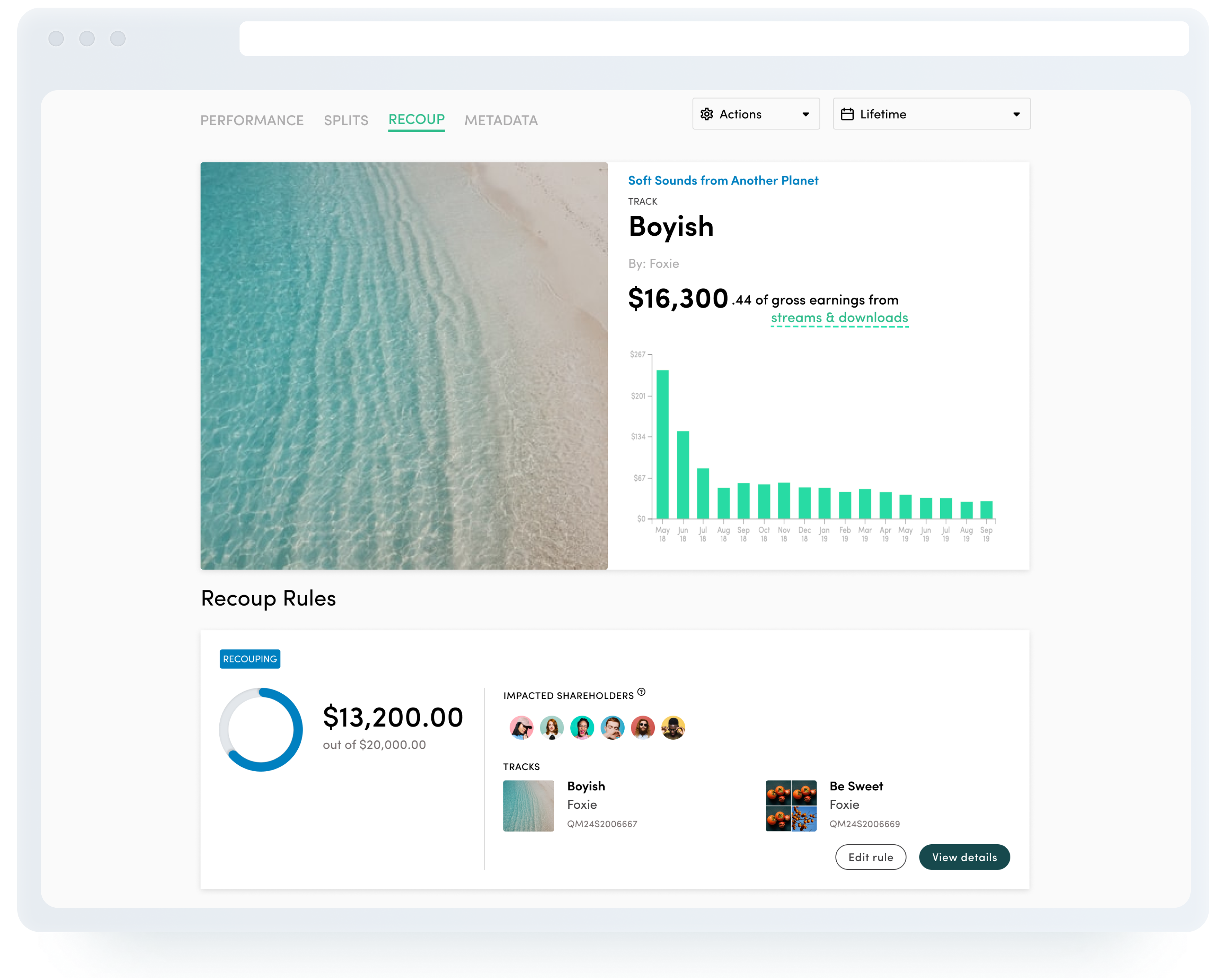 The lack of transparency around the organization of artists’ many revenue streams is one of the largest elephants in the music business’ far-too-shabby room. So, why has it taken so long for new players to provide fresh options? And why are the major labels so slow to come out of the dark ages?

“If you asked me these questions five years ago, I would’ve told you that the industry wants to be opaque because it benefits from opacity,” answers Rabkin Lewis. “I don’t think that’s true anymore. A lack of easy-to-use tools has prevented more clarity.” (Just in the last couple years, more music companies have started rethinking the ways in which they approach the financial side of music distribution; it wasn’t long ago that Downtown Music Holdings bought CD Baby for $200 million, and just last week UnitedMasters introduced some intriguing new tools of their own.)

It’s well-documented that change can take eons in a large corporate operation. There are usually hierarchical systems of politics in place; also, companies that have been around for 50 or 100 years have to navigate the growing pains that come from ditching age-old methods of manual structuring and tabulation. “We’re trying to force everyone to modernize,” Rabkin Lewis says. “And, quite frankly, few people have challenged that. We launched distribution with [our earlier tool] Splits, and then, a year later, we saw other distributors launch things like Splits. [Kobalt’s label arm] AWAL then launched a dashboard.” Soon after, the major labels started prioritizing the creation of dashboards for artists — Sony doing it on the masters side and Universal doing it on the publishing side.

Rabkin Lewis says she’s confident in Stem’s continued ability to make “everyone else level up their game.” When asked if Stem has any aspirations of partnering with major labels down the line, Rabkin Lewis pauses before offering a crumb: “I’d love to make these tools available to major labels and other labels that we do not distribute.”