Samantha Markle is putting her money where her sister’s mouth is!

The half-sister of Meghan Markle has long maintained that the Duchess of Sussex is painting a largely fabricated portrait of her humble beginnings. Heck, she even accused her of committing perjury in her testimony during her trial against the tabloids.

But on Thursday we learned Samantha is actually throwing down the gauntlet and legally challenging her famous half-sibling’s stories in a defamation lawsuit!

Legal docs obtained by TMZ show that Samantha is calling out her sister’s “rags to royalty” narrative, specifically what she told Oprah Winfrey in their landmark post-Megxit interview. How is this defamation if it was about her own life? Well, the lies are about Samantha’s family… we guess is what she’s claiming?

OK, so what claims is she contesting?

First, Meghan told Oprah she grew up an “only child.” Obviously this is a filthy lie because she has a half-sister? Well, we mean, technically we guess? But you have to remember, Samantha is 17 years older. So she was a grown adult for most of Meghan’s life growing up.

Along those lines, when Prince Harry‘s bride told Oprah she’s last seen her half-sister “at least 18, 19 years ago and before that, 10 years before that,” well, Samantha isn’t taking that lying down! It’s unclear when the two actually had a sit-down, but it hasn’t been since we’ve been covering Meghan. She told Us Weekly in a 2017 interview that it had “been a bit” since she’d seen her sister. Reports at the time said they hadn’t spoken in over two decades. Huh. 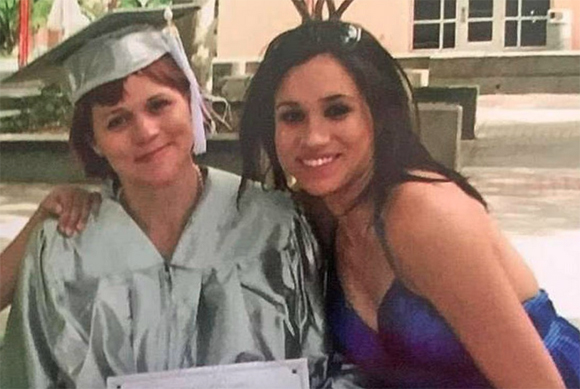 Oh, there’s also the fact the Duchess pointed out her sibling only changed her name to Markle — before that she had been Samantha Grant — when Meghan gained a new level of fame by dating Harry, implying she was trying to draft off that family fame. That, the author of The Diary of Princess Pushy’s Sister Part 1 claims, is just plain wrong!

We can’t be sure the exact timing of the change… when we started covering her rants about her sister, Samantha was just starting to go by Markle in TV interviews, but her name elsewhere was Grant. Even her Twitter handle at the time was @SamanthaMGrant (the handle has since been abandoned and taken by someone else). In any case, it seems clear she did change her name — just when that happened will have to be proven in court we guess?

Finally, Samantha takes issue with Meghan’s own story about living in “virtual poverty” growing up. Meghan has painted a narrative of a teen working odd jobs (like in an ice cream shoppe) to pay for school. But Samantha says during that time their father Thomas Markle was paying for “elite and expensive private schools” as well as acting classes, eventually paying her college tuition at Northwestern University, a very expensive school.

So… is Samantha saying she’s being defamed by the implication her family was poor? We don’t fully understand this claim. Even if Meghan’s personal rags-to-riches narrative is wildly exaggerated (though no one will argue she’s way, way richer now than she was growing up), is that defamation?

It helps when Samantha sums up in the filing that she thinks all the lies were a pattern to discredit her and her father so “they could not interfere with or contradict the false narrative and fairytale life story concocted by” Meghan.

As stated many a time on this site, we are not lawyers. But we’re not sure we like Samantha’s chances here. Some of what Meghan said is subjective, some of it is going to be very hard to disprove. The only aspect that seems like defamation as we understand it is the name change comment — and all the media outlets referring to her as “Samantha Grant” prior to late 2017 are going to be good evidence on Meghan’s side.

What do YOU think, Perezcious paralegals? Does any of this rise to defamation in your eyes? Does Samantha have a legal leg to stand on? Or is this all for attention??

Let us know your thoughts in the comments (below)!