In case you aren’t aware, Megan Fox has a lot going on right now. And by that I mean she’s busy starring in five upcoming movies slated for 2021/2022 release—including Big Gold Brick (co-starring Oscar Isaac, Andy Garcia, and Lucy Hale), Naya Legend of the Golden Dolphin (co-starring Kate Winslet and Elliot Page), and—of course—Midnight in the Switchgrass AKA the movie where she met her twin flame Machine Gun Kelly. Megan and MGK have, along with their IRL friends Travis Barker and Kourtney Kardashian, helped usher in a delightful new era of celeb PDA, and I’m pretty comfortable declaring that they’ve managed to secure their spot as THE cutest couple of 2021. Truly, after a year devoid of red carpets, this is the content we deserve: 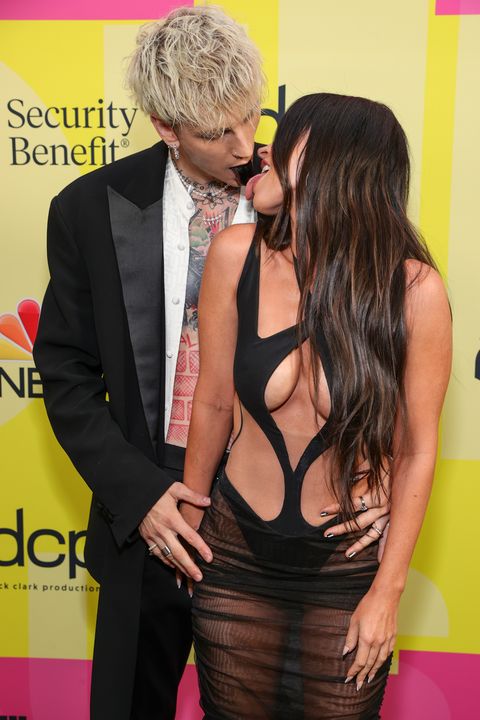 Megan no doubt has even more exciting projects coming her way, but in case you’ve erased all of the early aughts from your memory, please note that she’s always been famous/talented/iconic/legendary. And if you have any doubts, look no further than her bank account ’cause it’s proof that her hard work pays off.

Megan made her debut back in 2004 when she starred in Confessions of a Teenage Drama Queen alongside Lindsay Lohan, but she really catapulted to fame in the Transformers movies. The first film of the franchise grossed a truly wild $709.7 million worldwide, and the 2009 sequel did even better at $835.2 million. It’s unclear what Megan’s cut of these movies was (there are claims that she made $800,000 for the second one), but what *is* known is that she didn’t have an easy time working with Michael Bay—an experience she got into in a 2009 interview with Jimmy Kimmel. Over the past year, the internet has revisited the way Megan was treated by a largely misogynistic industry, and she opened up about it at length on Instagram last summer:

Yep, Megan Was a Target of the Bling Ring

Allow me to jog your memory: Megan was one of the celebs targeted by the Bling Ring, a group of teenagers who broke into the homes of several celebrities in 2009. Apparently, the actor’s closet was the main attraction, but the teens also stole “a handgun” and “a watch” from her then-boyfriend Brian Austin Green. This Emma Watson movie exists if you wanna dive into that whole thing:

Megan Makes a *Lot* for Endorsements

Back in 2009, Megan became a face of Emporio Armani, and an anonymous source reported that she got seven figures for the deal. Just in case you were thinking of reaching out to see if she’d sponsor your brand!

She Owns Some Fancy Real Estate

TBD on how all of these mansions might be divvied up once Megan’s divorce from Brian Austin Green (BAG) is finalized, but in 2009 the then-couple purchased a home in L.A. for $2.95 million, which they ended up selling for $3.75 million (o-m-g @ that nearly a million-dollar profit!). They also have a $3.2 million Malibu property, though Megan reportedly sued the seller for $5 million due to an allegedly undisclosed mold problem.

So, What’s Megan Fox’s Net Worth, You Ask?

That’d be $8 million, according to Celebrity Net Worth. Her impending divorce from Brian Austin Green might change things up, of course, but wow. IMPRESSED.

You love all the deets on celebs and their massive piles of money. So do we! Let’s overanalyze them together.