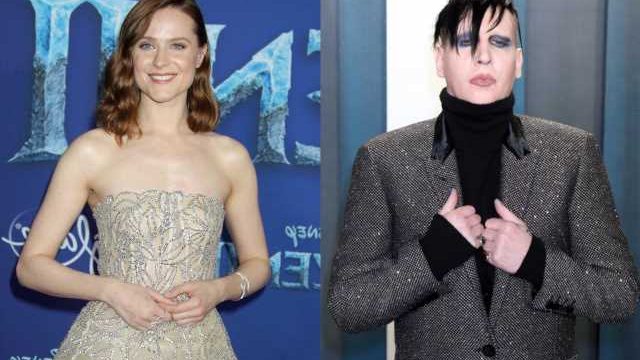 Sharing the complaint to social media, ‘The Beautiful People’ crooner promises to ‘share more events of the past year’ and lets ‘the facts speak for themselves’ after filing defamation lawsuit against his ex-fiancee.

AceShowbiz –Marilyn Manson is standing up for himself. “The Beautiful People” crooner has vowed to speak the truth and share more facts after he filed defamation lawsuit against Evan Rachel Wood over sexual abuse claims made by his ex-fiancee.

On Wednesday, March 2, the 53-year-old rockstar took to his social media accounts to share a link to the lawsuit he filed via his attorney Howard King against the “Westworld” actress. Along with the link, he wrote, “There will come a time when I can share more about the events of the past year.” He then added, “Until then, I’m going to let the facts speak for themselves.”

Marilyn, whose real name is Brian Warner, filed the complaint in Los Angeles Superior Court via his attorney Howard King on Wednesday morning, per TMZ. In it, he alleged that she “derailed his successful music, TV and film career” with “malicious falsehood” of the abuse allegations she made against him.

Marilyn sued Evan Rachel for conspiracy, defamation, emotional distress and “impersonation over the internet,” according to the paperwork. In the complaint, he also accused the 34-year-old actress and her “romantic partner,” artist Illma Gore, of recruiting and pressuring women into making allegations against him and impersonating FBI agents to further coerce the women by making them believe their families were in danger.

Marilyn also claimed that Evan Rachel and Illma created a fake email address to make it look as if he sent her “illicit pornography” and that the pair orchestrated a swatting incident at his Los Angeles home last month. The complaint further stated that the “Kajillionaire” actress and her girlfriend provided checklists and scripts listing specific acts of abuse for prospective accusers to claim against him, including that he filmed the sexual assault of a minor.

Marilyn is currently seeking unspecified damages in “an amount to be determined at trial.” In a statement, his attorney Howard said that the complaint was filed in order to “stop a campaign of malicious and unjustified attacks” on the musician.

“Years after the end of Evan Rachel Wood’s long-term relationship with Warner, she and her girlfriend Illma Gore recruited numerous women and convinced them to make false allegations against him,” the statement read. “As part of their plot, Wood and Gore illegally forged a letter impersonating an actual FBI agent and falsely claiming that she was conducting a criminal investigation of Warner.”

Howard added that Evan Rachel and Illma also used that fabricated FBI letter to trick HBO into distributing a one-sided documentary, “Phoenix Rising“. The attorney also believed that the doc was premised on the existence of an entirely fictitious federal investigation.

“Even though HBO and the producers have been made aware of these serious acts of misconduct, they have thus far chosen to proceed without regard for the facts,” said Howard. “But the evidence of wrongdoing by Wood and Gore is irrefutable and this legal action will hold them to account.”

In the said doc, which premiered at the Sundance Film Festival in January, Evan Rachel claimed that Marilyn’s “first crime” against her took place while filming the rocker’s 2007 “Heart-Shaped Glasses” music video when she was 19 years old.

The “True Blood” alum insisted, “I was coerced into a commercial sex act under false pretenses.” She went on saying, “That’s when the first crime was committed against me. I was essentially raped on-camera.”

Responding to the shocking allegations, Marilyn vehemently denied the claims via his lawyer Howard. The attorney stated that Evan Rachel’s accusations were “brazen” and easily debunked as “there were multiple witnesses.”