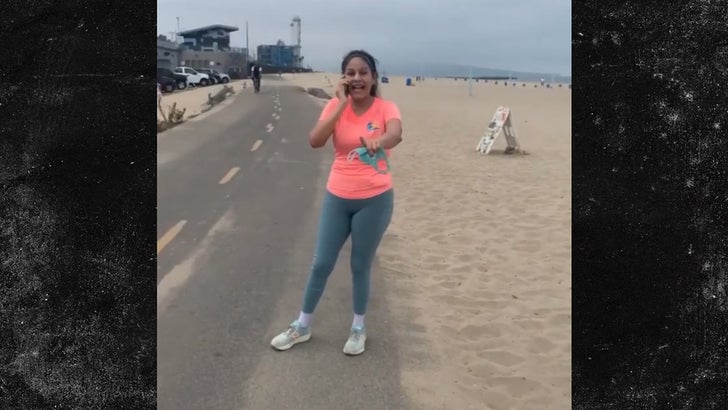 “Karens” are all across this country lately, from Manhattan to Manhattan Beach. Case in point, this woman … who’s oozing racism from her pores.

Check out this wild scene captured on camera this weekend in the South Bay beach community in Los Angeles County, where a Black woman started filming another woman along the bike path who was having an absolutely racist meltdown.

You can hear the “Karen” in question claiming that the Black woman accosted her, and that she was going to call the police … which she eventually does. The videographer fires back, saying this lady called her the n-word … which the woman in question doesn’t deny.

What she does do … constantly call the woman of color an “African” in an utterly condescending tone. She goes on to ask why “you people are so violent” and then actually gets on the line with a 911 operator and continues her racist spiel.

She doesn’t attempt to make up an actual emergency — like that one “Karen” did in Central Park earlier this year. The lady simply says her “environment” is being threatened by “an African” and she needs assistance STAT. It’s just absurd to it see play out.

As for what precipitated this … who knows, who cares. The reaction by the woman on camera is outrageous. The one thing we do know is that the brother of this Black woman was absolutely infuriated. Brandon Crockett writes, “I’ve had enough of seeing my own people being accosted in the middle of their daily activities for quite literally, just being black. And I most certainly have had enough of seeing us being slaughtered in broad daylight. I can hardly explain how infuriating this s*** is.”

He goes on to say that anyone who sees stuff like this — blatant acts of racism — and doesn’t speak up is part of the problem … even if they think it doesn’t affect them.