Lana Del Rey seems to have a new man in her life! Back in July, she and fellow singer Jack Donoghue posed together for a since-deleted IG hard launch (more on that in a bit), adding fuel to relationship rumors that had been brewing for months. Lana was also spotted celebrating Jack’s 33rd birthday in Los Angeles this past May, and she’s quite literally *beaming* in this picture, so this ‘ship is clearly making her happy:

Though Jack isn’t quite as mainstream as Lana, he is famous in music circles and has gained tons more notoriety since pairing up with Lana. Here’s everything we know about him.

This past July, Lana and Jack practically broke the internet after they hard-launched their relationship on Instagram with a pair of photos taken outside of Chicago’s Cook County Jail. Though the photo has since been deleted, the post was initially on Jack’s page and captioned “family visit.” Of course, it still lives on in the not-so-deep corners of Twitter for us to see three months later, and for that we are thankful.

this is my kim k and pete davidson pic.twitter.com/itcXoQCjhZ

As famous pioneers of the musical style witch house, both Jack and fellow musician John Holland—the two make up their band, Salem—released a 2010 debut studio album titled King Night, which went on to become one of the decade’s most influential records and even captured the attention of the New York Times. The duo then disappeared for a decade (kind of iconic, IMO) before resurfacing in 2020 to drop Fires in Heaven.

Jack *also* just so happens to be involved in other artist’s projects; he has production credits on Kanye West’s Yeezus album and has even created a Salem remix for Charli XCX.

He was previously linked to Courtney Love

Like, Jack walked the 2011 red carpet of the amFAR gala with Courtney, who performed at the legendary event. 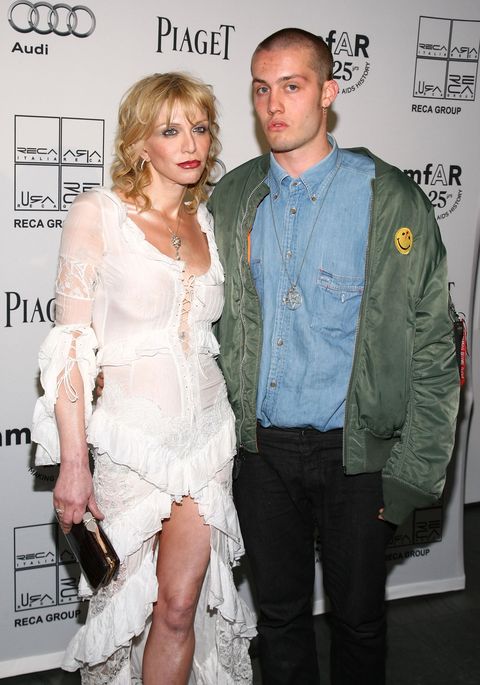 Jack is also apparently a longtime friend of Julia Fox and “counts artists like Wolfgang Tillmans and Jeanette Hayes amongst his inner circle,” per W Magazine. Color me intrigued!

A source close to Jack dished to the Daily Mail that the pair is practically destined to become “this unexpected power couple of dark, twisted Americana” before adding that they “seem really into each other.”

“You might not believe this, but Jack is really romantic. He’s totally crazy about Lana. While she was away for a few days, he was playing her songs really loud, making sure the sound system was good enough,” the source continued. “Jack is all dark and edgy and seems anti-everything but underneath all that he’s actually a good-looking guy, an all-American hunk. He’s kind of like this troubled, hot guy, someone who maybe played football in high school but then dropped out to chase his demons.”

^^ Also, shoutout to Jack for posting this v cute, not-at-all-dark content on his feed.

Lana stans have called out his social media

Because anyone who dates Lana is going to be a topic of conversation in her fandom, many people have resurfaced some of Jack’s old social media posts—some of which still live on his Instagram page. In one photo from 2016, the singer can be seen licking his dog’s tongue with the caption: “✨Throw back✨ to my first relationship🍀”

In February of that year, Jack also shared a video of himself making out with a man and accompanied the post with the words, “Fadddddeddddd 😖…. Bruh: this is my first cousin…. Found this vid on my phone just now………..¿Wud up family that follows me? 😪 #wtf”

Needless to say, these posts have definitely sparked ~thoughts~:

Wait — those pics of Lana Del Rey’s new boyfriend making out with a dude — it was his cousin? pic.twitter.com/zB9VwUpiZI

Aaaaaand that’s pretty much all we know now, but stay tuned for more intel on this “unexpected power couple of dark, twisted Americana!”