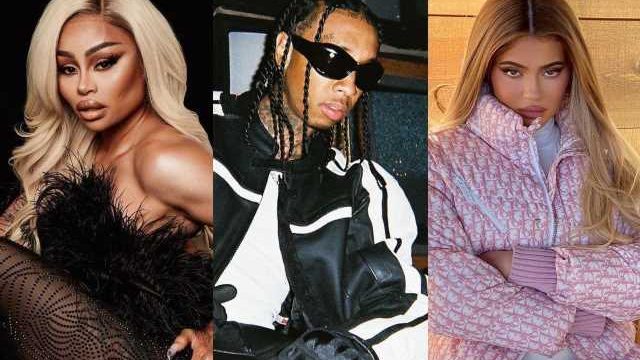 After testifying that her ex once showed her a scar that he allegedly received following a fight with the model, ‘The Kardashians’ star is criticized for not telling the jury about her age when dating the ‘Ayy Macarena’ rapper.

AceShowbiz –Kylie Jenner has been receiving criticisms after giving testimony amid the Kardashian-Jenner family’s ongoing trial against Blac Chyna. The “Keeping Up with the Kardashians” alum was blasted by online critics after she testified about Tyga‘s 6-inch scar from alleged fight with Blac.

On Monday, April 25, the Kylie Cosmetics mogul told the jury that Tyga once told her that Blac harmed him with a knife following their heated argument. She also added that Tyga told her Blac abused drugs and alcohol and it led to the alleged knife attack.

“I felt it was my duty to express my concerns, but ultimately it was up to him,” Kylie told the court. “Tyga did tell me that he never planned on marrying her, but that’s just what he told me. I don’t know if they were really engaged or not,” she continued.

Kylie said, “I was a little bit concerned from the thing I heard from Tyga.” The youngest daughter of Kris Jenner added, “Tyga and I went over to [Rob Kardashian]’s and expressed our concerns. He did express he was going to continue the relationship.”

Upon learning of Kylie’s testimony, many social media users criticized her, pointing out that she was underage when Tyga dated her and told her about his wound and the alleged attack. “But Kylie did u tell them how old u weere before dating tyga??? [crying emojis],” one person opined. Another wondered, “So when you was 16 he was pillow talking you???”

“But wasn’t he dating you at 16 (minor) mam and he was an adult?” someone else noted, with a separate person saying, “Let’s talk about how OLD you were when you FIRST started dated tyga lmao you should’ve left that man alone.” One person penned, “Did she explain to the judge she was 14/15/16 when tyga courted her and ‘told’ her this?” while another urged Kylie to “bring up that [she was] underage.”

Others, in the meantime, questioned why Kylie brought up Tyga and his alleged physical altercation with Blac as it has “nothing to do” with the case. “But what does that have to do with ROB AND CHYNA?” asked one critic. A different person wrote, “Why bring tyga into this when it has nothing to do with him?”

Blac and the Kardashians have been in a legal battle since 2017. Blac sued Rob and his reality TV family that October, over claims of assault, battery, domestic violence, defamation and “interference with contract” that led to “Rob & Chyna” being canceled. Responding to the allegations, the famous family denied the claims and argued that they were trying to protect Rob from an abusive relationship.