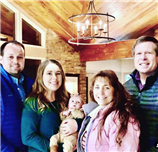 The jury in Josh Duggar’s child pornography trial has entered deliberations, and we may have a verdict before the day is out.

Obviously, of the millions who have been following this trial closely, the vast majority are hoping that Josh will be convicted and sent to prison for a very long time.

Not only does the evidence in this case point to overwhelmingly to Josh’s guilt, but this is not the first time that the 33-year-old has been accused of predatory behavior.

As you’ll probably recall, in 2015, the world learned that Josh had molested five young girls, four of whom were his sisters.

He was able to avoid prosecution with the help of his parents, who took him to the authorities only after facing pressure from others in their community.

One of those people was Bobye Holt, a longtime friend of the Duggars’, whose eldest daughter was once in a courtship with Josh.

Holt took the stand this week to share what she knows about Josh’s past sex crimes.

She revealed that she was first informed of the molestation back in 2003.

Jim Bob and Michelle wanted her to be aware of Josh’s misdeeds so that she would understand why their teenage son could no longer date her daughter.

In 2005, Josh visited the Holt family in Little Rock, Arkansas, and when he spoke of the attacks, Bobye learned that they were more severe than Jim Bob and Michelle had led her to believe.

On social media, fans have praised Bobye for her courage in taking the stand and testifying against her former friends.

Others, however, have criticized Holt for her failure to speak out earlier.

But there’s more to the story than these critics realize, and on Wednesday, Holt took to Facebook to defend herself.

To the surprise of many, she revealed that Josh was taken to the authorities three times in 2006 and was almost charged for his crimes in 2007.

“We’ve been screaming this from the mountain tops for 18+ years!” Bobye replied to one commenter, according to The Ashley’s Reality Roundup.

From there, Holt went into specifics with regard to just how close Josh came to being arrested.

“Did you know my husband and our daughter was subpoenaed for that trial? Did you know the prosecution dropped it because my family was going to testify?”

She went on to state that Josh’s victims were failed by both police and by Jim Bob, who manipulated the situation in order to ensure that his son would not be charged.

“Remember the trooper [Josh] was taken to? This was 2004. He did NOTHING because [Jim Bob] lied to him and set it up,” Holt wrote.

“We didn’t find this out until the end of 2006. Then [Josh] was taken to authorities AGAIN, the 3rd time!” Bobye continued.

“Then that’s when there was supposed to be a trial, but the prosecuting attorney dropped it because our family was subpoenaed to testify.”

One commenter offered Jim Bob and Michelle a shred of sympathy, suggesting that Josh’s parents “don’t quite understand that when they took the side of Josh all those times they were choosing a predator over his victims and their own daughters.”

“They thought it was grace and mercy but maybe they were unwittingly playing a part victimizing these girls and not protecting their innocence,” this person added.

“I sadly feel you are right,” Bobye replied.

“We were silenced and made to be ‘the bad guy’ for all these years. God help us!” wrote in response to another user’s comment.

Holt’s remarks serve to remind us how deep this tragedy goes, and how long Josh has been getting away with appalling misdeeds with his parents’ tacit approval.

Clearly, Bobye continues to carry a great deal of guilt as a result of her involvement, but it sounds as though she did everything she could to ensure that justice would be served.

Not surprisingly, the Holts’ friendship with the Duggars’ ended around the time that Josh was nearly charged for the crimes he committed as a youth.

And as is so often the case, when it comes to the myriad Josh Duggar sex scandals, the parties who actually carry the blame seem to feel no guilt at all.

Sadly, we doubt that that will change, regardless of what verdict the jury delivers.

We’ll have further updates on this developing story as more information becomes available.