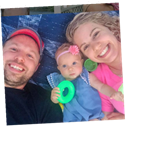 John David Duggar and Abbie Burnett are among the least controversial members of the extended Duggar clan.

But that doesn’t mean they’re immune to being raked over the coals for their more boneheaded decisions.

Obviously, you’re flirting with disaster if you travel to Florida under the very best of circumstances.

JD and Abbie further pressed their luck be decamping to the Sunshine State in the midst of a global pandemic.

To make matters worse, they brought their 1-year-old daughter Grace.

We know what you’re thinking — that doesn’t sound so bad!

Sure, Abbie and John David will take some flak for a few days, but the angry mob will move on!

After all, who among us hasn’t violated an anti-Covid guideline or two over the course of the past year.

But you see, it wasn’t just John and Abbie’s decision to hop on a plane with their baby and head to the middle of a Covid hotspot.

No, the couple found themselves in a mini-scandal double-whammy as a result of the activities that they engaged in once they arrived in Orlando.

Maybe they wanted to save some money, or maybe they just they believe the idea of a six-foot pants-wearing mouse is sacreligious,

Whatever the case, John David and Abbie appear to have skipped over DisneyWorld … in favor of SeaWorld.

“This is how much we enjoyed our trip to Florida! #florida #seaworldorlando,” John and Abbie captioned the above photo.

You don’t have to be animalk rights activist to know that SeaWorld is a horrible place where horrible people doing horrible things to awesome creatures.

So it should come as no surprise that not-so-awesome John and Abbie are taking a ton of flak for bringing their daughter there.

Now, it’s uncommon for Duggar women to get mom-shamed by their own Instagram followers.

Often, this happens unfairly, and the ladies of the J-squad are criticized for everything from walking to Chick-Fil-A to living too close to a busy street.

But this time is different for two very important reasons:

1. Both John David and Abbie are being roasted by fans, so it’s an equal-opportunity shaming!

2. Unnecessary travel during a pandemic is done and Seaworld sucks, so these two 100 percent deserve to get dragged!

“Traveling during a pandemic,” one follower wrote.

“Crazy decision to travel anywhere, especially to Florida during a pandemic,” another added.

“Is travel wise? There are strict rules in Canada due to Covid. This pandemic shouldn’t be overlooked!” a third chimed in,

“Their choice of venue is not good either … SeaWorld is where killer whales dolphins etc are made to do tricks and die early in captivity,” one person pointed out.

Of course, this is the internet in 2021 — a time and place where everything is up for debate.

So naturally, conspiracy theorists and other wingnuts came out of the woodwork to defend John and Abbie.

“Adorable! Glad you’re enjoying life even during pandemic. Still need to make memories and not be stuck between walls,” one dummy wrote.

“Woot woot and everything was OPENED for business too!” another added.

Sigh. We’ve known for a long time that the Duggars think the coronavirus is a hoax, but it’s bummer to be reminded that there are millions who agree with their idiocy.

Woot woot and everything was OPENED for business too!