CNN host warns Trump-supporters, ”[He] will find new ways to disgust you. And betray you“ 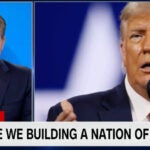 And earlier this week, Trump spread another lie while also criticizing a much-respected man, four-star General Colin Powell, who died of complications from COVID-19. Trump gave no kind words or offered no sympathy to Powell’s family upon his death. Instead, Acosta pointed out, Trump trashed him in a statement, calling him a RINO (Republican in name only), which he was not.

“For years, Powell tried to warn Republicans about the direction of the Republican party,” Acosta said. “Way back in 2008, Powell called out Republicans who were falsely claiming that then-candidate Barack Obama was a Muslim, as if that was a bad thing. Taking your party on and telling some tough truth, that is true leadership.”

Colin Powell also tried sounding the alarm about Donald Trump. Just after Jan. 6, Powell said the insurrection at the Capitol was part of what he had been warning about.

With Twitter and Facebook both booting off Trump, making reaching his supporters more difficult than before and during his time in office, he announced the launching of a “new platform to amplify these lies,” as Acosta put it.

“He’s going to call it TRUTH Social,” Acosta said. “Now, there are rules on TRUTH. For example, apparently, you can’t say anything bad about Trump. And when Trump and other users post their messages, they’re going to be called ‘truths.’ A hundred bucks says Trump’s first ‘truth’ on TRUTH will be a lie. Because he’s a liar.”

Resurfacing his “blowing things up” analogy from the beginning of his segment, Acosta said, “If Republican politicians want to blow things up, if they want to shock us, then do this before it’s too late, before there is more political violence in this country — tell the truth. He lost.” Acosta repeated softly, “He lost. You can practice this at home in front of a mirror. Just say the words — he lost.”

“His soul is a black hole swallowing up the nearest, weakest objects around him. Blowing up a Prius in a TV ad doesn’t make you look tough. It makes you look ridiculous. If you want to look tough, blow us away by telling the truth.” 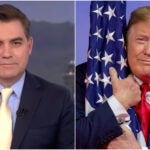