Jill Duggar and her husband Derick Dillard gave fans an idea about their healthy intimacy when discussing their marriage in a new video that promoted their favorite couples app.

Jill Duggar, 29, and Derick Dillard, 31, want everyone to know they’re living a healthy life together when it comes to their intimacy. The happy couple, who were married in 2014, shared a new YouTube video on Feb. 6 that gave their fans an inside look at what a date with their two sons, Israel David, 5, and Samuel Scott, 3, looks like as they also separately discussed their “good sex life.” The revealing video was posted to help promote their “new favorite app” for married couples, Intimately Us.

After letting their viewers know about the app and how the video was going to take them on a date with her, Derick, and their kids, Jill also made sure to let parents know that the feature would discuss their sex life and is “definitely designed for married couples”, not children.

During the date, the family of three drove around in a car to some of their favorite places and at one point, the sex topic came up. “Do you know how you got born?” Derick asked the boys. “We had a date and then you started growing inside of mommy’s tummy.”

Jill then responded to Derick’s cheeky use of the word “date” and went on to say her own funny comment. “We had a bunch of dates,” she said. 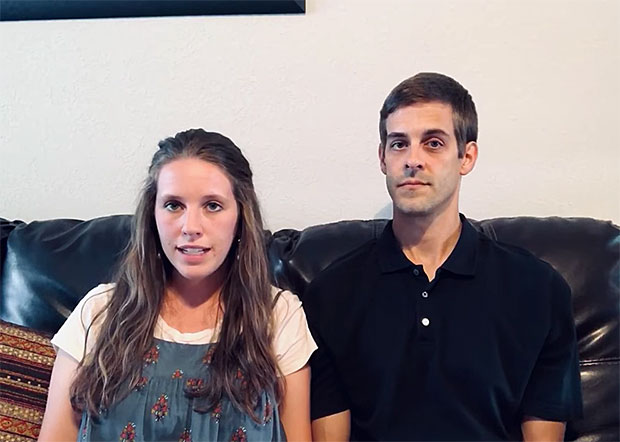 “We did have four dates in one day I think … that one time,” Derick replied, before his wife told him to “chill a little bit” and the two laughed. The mom then looked into the camera and whispered, “We have a good sex life.”

Jill and Derick’s recent admission is just one of many times they’ve been open about their personal lives. They’ve previously talked about topics like going to therapy, drinking alcohol, and even using birth control. The last topic came up during a YouTube Q&A session with their fans back in Sept.

After revealing that they were using “non-hormonal birth control”, Jill explained it’s because they “want to be careful.”

″We’re more natural-minded,″ she said while discussing her reason for choosing her type of birth control. ″Eventually, we want to have more kids and stuff — lord willing — so we don’t want to mess too much with all of that and potentially cause problems.″

Derek then let everyone know that Jill will “probably” go off birth control when they decide to have more kids.