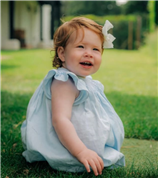 Another woman in your family is about to steal the spotlight.

On Monday, in the wake of the Queen’s Platinum Jubilee — a four-day holiday weekend to mark Her Majesty’s unprecedented 70-year-reign — Meghan Markle and Prince Harry took fans by very pleasant surprise.

They unveiled a brand new photo of their second child and only daughter, Lilibet.

In the snapshot, which also came on the heels of the toddler turning a year old, Lilibet is smiling as she plays in the yard of her family’s home.

She’s donning a blue dress and a white lace bow in her red hair, a trait she clearly inherited from famous dad.

Close family friend and Misan Harriman (who attended Lilibet’s party with his wife and children) took the “candid, spontaneous photograph that the Duke and Duchess are pleased to share today,” according to a Meghan and Harry spokesperson.

The couple “remain incredibly touched by the countless birthday wishes for their daughter, Lilibet Diana Mountbatten-Windsor,” the spokesperson added, saying that they were “amazed to learn” that donations in her honor for the World Central Kitchen (WCK) amounted to more than $100,000.

“WCK is first on the frontlines, providing meals in response to humanitarian, climate and community crisis. They build resilient food systems with locally led solutions.

“Most recently, they provided support in Uvalde, TX and Ukraine.”

Lilibet is named after her great grandmother, Queen Elizabeth II, who got to meet the child for the first time last week.

“Harry and Meghan visited the queen at Windsor Castle with Lilibet and [son] Archie,” an insider previously told Us Weekly.

The visit came as the 96-year-old monarch canceled a number of events, even though she “really wanted to be there” for the celebrations.

“After reluctantly pulling out of Party at the Palace, spending time with her great-grandchildren and seeing Lilibet turn 1 added some light to her day,” this insider explained to this outlet.

“She thinks they’re adorable and gave Lili and Archie gifts.”

While Archie and Lili did not attend any of the Jubilee events, their mom and dad stepped out on Thursday for Trooping the Colour and on Friday for a thanksgiving service in honor of the Queen at St. Paul’s Cathedral.

They did not attend the Platinum Party at the Palace on Saturday evening nor Sunday’s Platinum Jubilee Pageant outside Buckingham Palace.

They scarcely interacted with alleged rivals Kate Middleton and Prince William, too, based on reports overseas.

Markle and her husband, of course, walked away from the Royal Family over two years and then moved to Los Angeles.

They have very little to do with the Queen or anyone in her inner circle these days.

They’ve remained on decent terms with the woman sort of in charge of the United Kingdom, however, after also stopping by Windsor Castle during their visit to the Netherlands to commemorate the Invictus Games in April.

“Both Meghan and I had tea with her. It was really nice to catch up with her,” Harry said during an interview with Today‘s Hoda Kotb after that trip, noting that his grandmother was in “great form” when they got together.

Harry also discussed getting to return to the U.K. after moving to the U.S. with his spouse.

“Home for me now is, for the time being, is in the States and it feels that way, as well,” Harry added at the time.

“We’ve been welcomed with open arms and have such a great community in Santa Barbara, [California].”