The cast of Grown-ish has never been afraid to focus on the tough subjects through the lens of college students, from unexpected pregnancies to the school-to-prison pipeline. But there’s a particular weight that comes with shifting the focus from a wild jaunt in Mexico to the long-time fight against police brutality, white fragility and the countless battles waged by the Black Lives Movement. But that’s exactly what the series’ fourth season looks to examine in their two-week event which began with episode five, titled “A Boy Is a Gun,” on Aug. 5.

Diggy Simmons’ Doug takes the lead in the first part of the two-episode arc, questioning the role of social media in activism and the toll that constantly being on the frontlines — both virtually and physically — takes on the Black community. Doug isn’t so much as disinterested in supporting the Black community as he is burned out by the constant barrage of trauma one finds. While social media is undoubtedly a useful resource of information, it also deserves a triggering warning for being a massive fount of Black pain.

After the police kill a young man named Marcus, the group debates what a “good” Black person would do: uplift their community through support or prioritize their mental and emotional wellbeing? The heated debate begs the question — how does one “properly” support or critique the movement? The answer is left unclear and in the end, another police killing spurs Doug to join Aaron (Trevor Jackson) and Luca (Luka Sabbat) at the next Black Lives Matter protest.

While chatting with ET over Zoom, Simmons recalls it was a difficult time to film the episodes only a few months after the real-life protests flooded streets across the world. “I just wanted to tap into a lot of things. Not only what was real to me but the emotions of people that had loved ones that were lost, and what that means to them,” he explains. 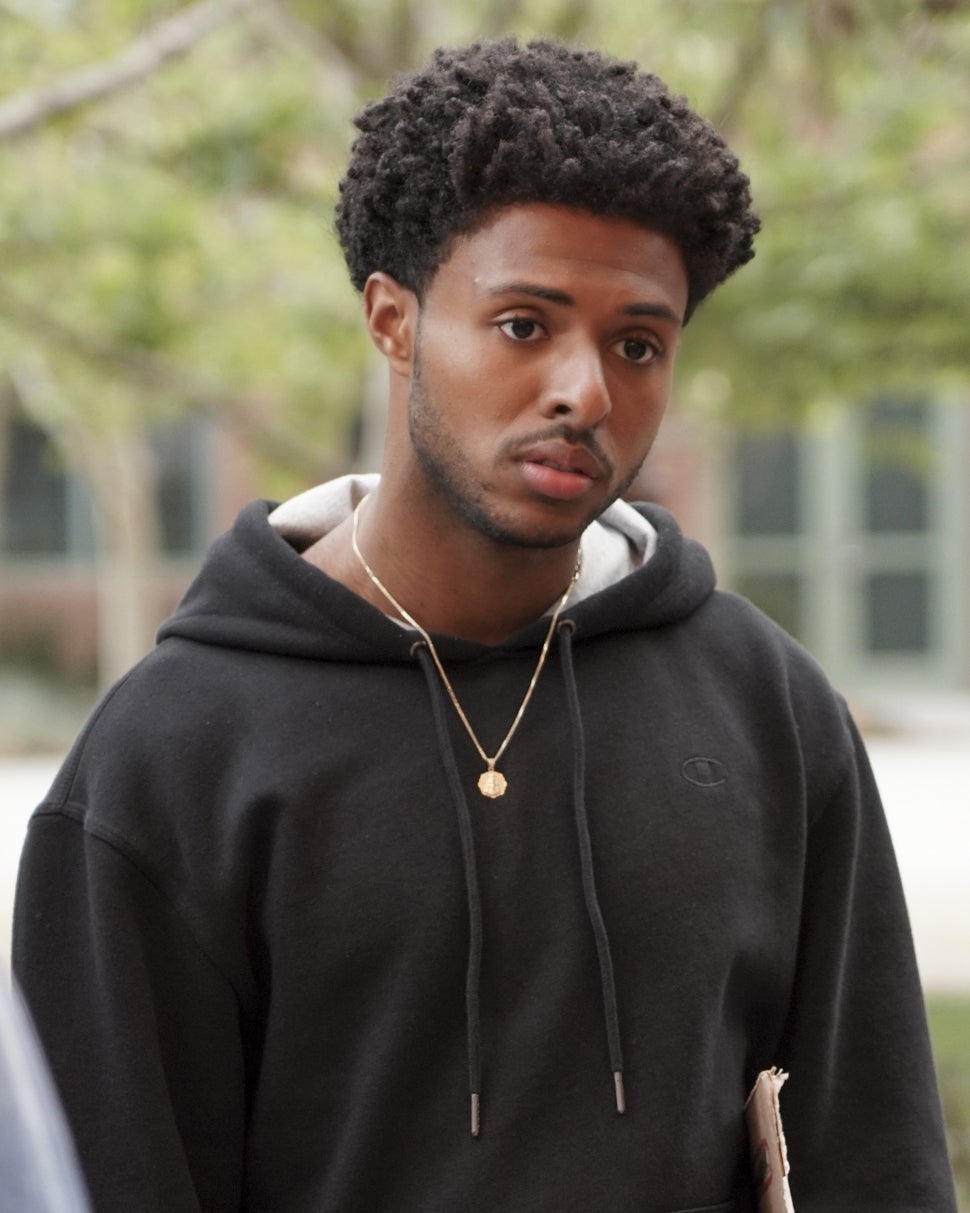 “I just wanted to go to all of those different places when approaching this because obviously it’s such a serious topic and you want to do it justice and you want to speak for more people than just yourself,” he adds. “So yeah, I had a great time doing it, although obviously what we’re speaking about is very unfortunate. I was very fortunate to be able to tackle that.”

While Yara Shahidi and her co-stars are well-known for using their platforms to speak out against social injustice, the actress credits season 4’s handling of the subject all to the writers.

“I think as we all have big personal platforms on which we make our voices known, it’s markedly different from even what our characters things and how our characters are participating in such a movement. And so I feel like these episodes were a culmination of who we’ve gotten to know our characters to be and using that as an entry point to explore the many ways in which we react to the Black Lives Matter movement,” she explains.

“And the reason that’s important, and that’s something that we talked about prior, is that in this past year we have really acknowledged the fact that it’s not that these systems are broken,” Shahidi continues. “These systems are working precisely as they were meant to be and that’s a big shift in public sentiment.” 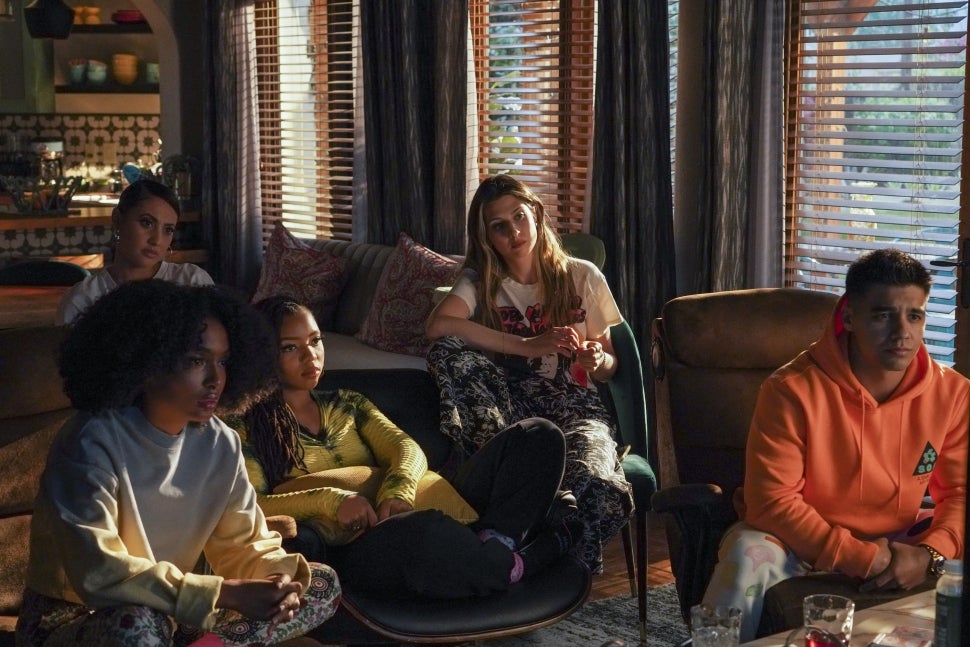 “I think the writers leveraged the fact that every single character has such a distinct voice that we got to go into the minutia of what it means to theoretically support equity but think that it comes in the form of police enforcement,” she adds. “[What it means] to theoretically support equity, but have a negative reaction and criminalize people that are looting rather than criminalizing or looking at the situation that we’re in as precipitating all of these actions. So, I love that fact that through our characters we got to explore all of those angles or what it means to have a growing opinion.”

It’s a conversation and a journey that Shahidi believes is “worth it” for the series and her character’s growth. “I feel like we finally see why she had to go through so many obstacles when you see who she’s becoming,” she says.

This week’s installment features the resulting protest and an intense conversation about white fragility and allyship between Zoey, Jaz (Chloe Bailey) and Nomi (Emily Arlook). While speaking to ET, Bailey notes that although there wasn’t a personal goal in mind while filming, the cast and crew felt a need to do right by the subject at hand. 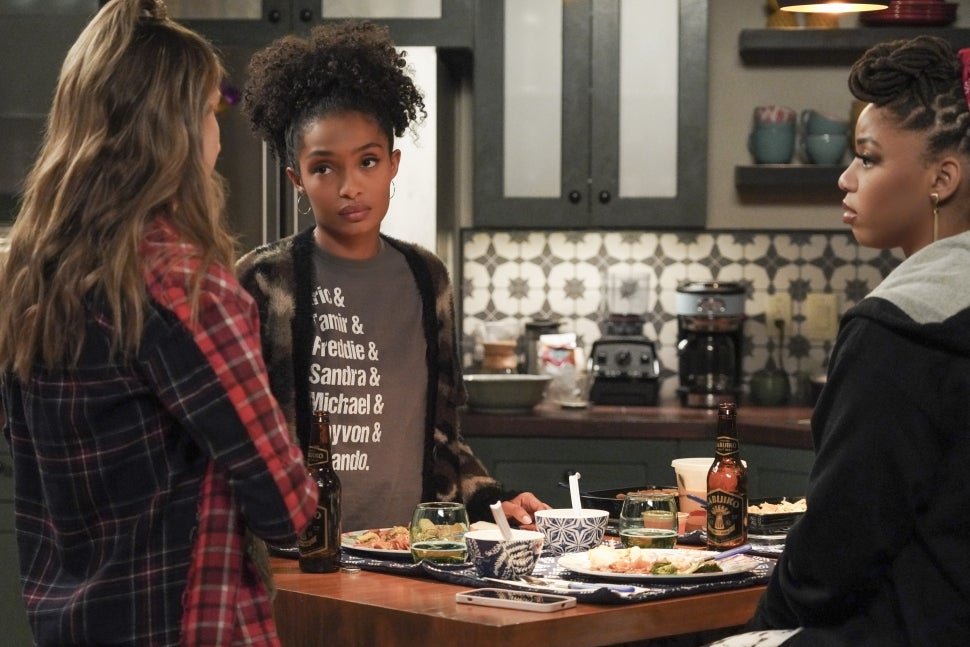 “It’s something we’re actively living every day,” she says. “I think we really just wanted to show our hearts and where we’re coming from and how painful this is for all of us. And I was really happy that we were able to share our pain through these episodes because it wouldn’t have been right to completely ignore these issues when we’re black college students. So I’m really happy with being able to portray that through art. It’s very painful, even outside of the show, but I’m happy that we were able to give that a voice.”

Arlook, whose Emily has to confront her own bias when challenged by Zoey and Jaz, shares that she approached the episode by wanting to be as true to the character as possible. “I tried to kind of go granular to work my way small and then move out because I basically approached it like, how can I just be true to my character? And how can I be as honest as possible within this story and to who Nomi is?” she says.

She adds, “The smaller I went in those moments, in those decisions, in those questions when approaching it, I think that was kind of the only way I could really approach something so big and so important to share. And I felt like sometimes the smaller we focus on truths, the greater it really does resonate and the bigger impact it can have. And it was just so, so important to share this story on the show I think because the reality is… Everybody hopefully has moments where they can learn more.”

Grown-ish airs on Thursdays at 8 p.m. ET/PT on Freeform.