Ellen Pompeo had a night out with former co-stars Eric Dane and Justin Chambers. The 51-year-old actress took to Instagram Story to share a video of the three of them out at dinner. The clip begins with Pompeo scooting closer to Dane, as Chambers comes up behind them and pretends to be a waiter.

“What would you like for dinner,” a bleach-blonde-haired Chambers, 50, jokingly asks. The actor is also seen in the next slide, with Pompeo writing, “It’s a hard knock life.” She then pans over to Dane, 48. 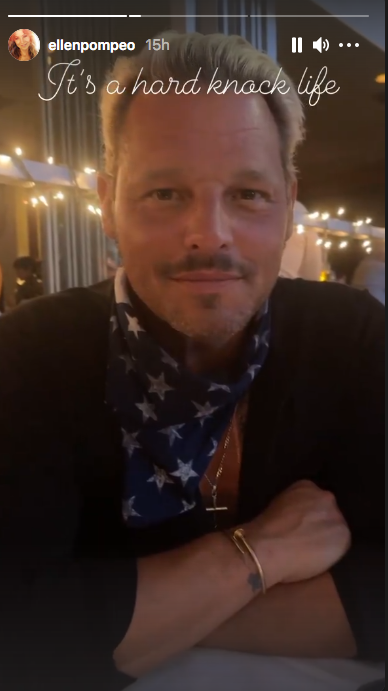 Pompeo remains a current cast member on the long-running ABC medical drama. Dane, who played Mark “McSteamy” Sloan, died in the season 9 premiere following the fatal plane crash that killed his love, Lexie. He made a surprise cameo during season 17, when a number of former cast members made appearances.

Fans, meanwhile, said goodbye to Chambers’ Alex Karev last year. The actor played the character for more than 15 seasons, with Alex revealing he was happily together with Izzie Stevens and that they were happily raising their two 5-year-old children on a farm with horses in Kansas.

Last month, AMB announced that Grey’s Anatomy was renewed for season 18! ET learned that Pompeo, Chandra Wilson and James Pickens, Jr. (the OG stars of Grey’s) will all be back for the new season.