Friends: The Reunion was watched by enough people to crash HBO Max, so we’re pretty sure every single beat has been pored over by fans by now.

But did you see every sweet moment of the cast coming back together? Maybe not. Lisa Kudrow didn’t even notice this one — because it was so casual and matter-of-fact!

Speaking to E! News‘ Daily Pop show on Wednesday, the one and only Phoebe (and Ursula, too, we guess) described the moment her co-star and old friend Courteney Cox arrived, right on cue as Matt LeBlanc was talking about her.

It was just as LeBlanc was telling the story of the first time he discovered she was secretly using the fruit bowl and the sink to hide her script, apparently to make sure she was getting her lines right in between takes. Laughing at her for not being off-book, the prankster once took her secret script and hid it from her. But just as he was laughing about his practical joke, Lisa recalls:

“Well, Courteney comes in and burst into tears.” 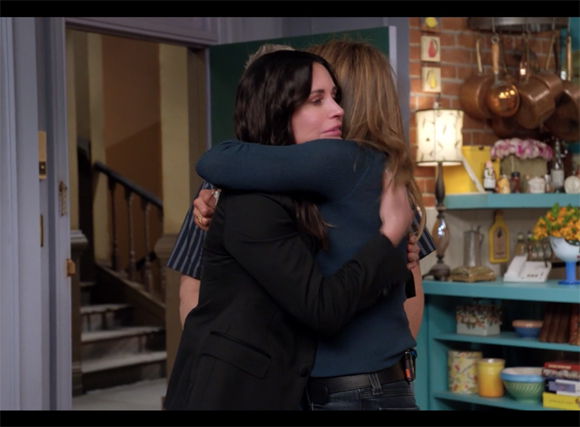 “…and I grab a napkin or a tissue — LeBlanc takes it because he is telling us a story and doesn’t want to skip a beat and starts dabbing her eyes, just on automatic.”

Yep! If you were too busy listening to the story, too, you may have missed how the Joey star didn’t give a second thought to gently helping Courteney protect her makeup from the waterworks — even while laughing about the time he pranked her!

Lisa said about the gesture:

The kind, caring moment was so ingrained in who they are, Lisa didn’t even notice it! Not just when she was a foot away but even when she was watching the special at home as it aired on HBO Max! Luckily she was watching with ANOTHER member of the fam, David Schwimmer. And he pointed it out to her.

They even watched the reunion together?? That’s so cute!

What was YOUR favorite moment from the Friends reunion??