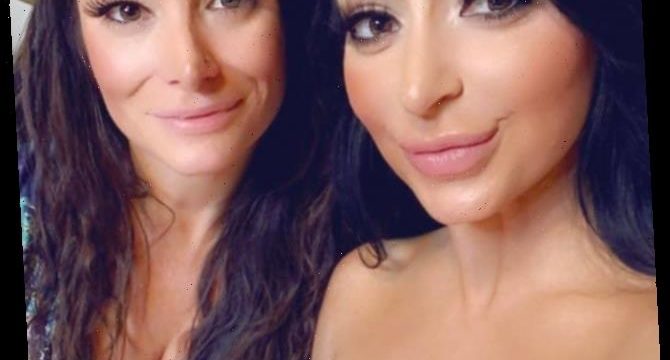 Well folks, we’re getting a little bit closer every week.

Eventually, Angelina Pivarnick will come face-to-face with one of her female castmates on Jersey Shore, and hopefully, when that happens, some sh-t will go down and this season will get interesting.

But it certainly didn’t happen during Thursday’s episode.

Don’t get us wrong — ther were some enjoyable moments.

We all had some laughs and learned some things.

For example, it seems that despite starring on a reality show for more than a decade, Mike Sorrentino has no idea how reality TV works.

More on that later.

But after weeks and weeks of build-up, the long anticipated clash between Angelina and Deena didn’t happen.

The reason, of course, was that Deena didn’t want it to happen.

The guys’ plan to blindside her with Angelina’s presence was always foolish.

It became even more ridiculous when they learned that Deena is pregnant with her second child.

So when the Situation and company lured Deena to dinner to break the news … well, it didn’t go terribly well.

“She always comes in with a change of heart when people are pissed off at her,” Deena ranted.

“I’m in Vegas with you guys, that’s what I thought was happening, I’m pregnant, my plan was to tell you I’m pregnant and have a good time with you,” she continued..

Deena capped off her polite, ambivalent tirade by informing the guys that she might be open to forgiving Angelina at a later date.

“I just don’t see us being close friends. I just don’t think it’s the right time here, but maybe later on,” she said.

It was an intriguing development.

Here, Deena was saying that she refused to sit down with Angelina on this trip, but she left the door open to burying the hatchet some other time.

As Pauly D noted, ten months had already passed since Pivarnick’s wedding and the bridesmaids’ speech that started this whole debacle.

If Deena is open to the idea of eventually forgiving Angelina for overreacting, why not do so now?

The answer, it turns out, is peer pressure.

In a conversation that was supposed to remain private, Deena told Mike that Jenni instructed her not to sit down with Angelina.

Is this some serious high school drama, or what?

“This is between me and you. I wanna make sure they can’t hear me right now,” Deena said.

“I was in the sister chat. I was like, ‘The boys, they’re really pushing a sit down,'” she continued.

“And this is between us, because whatever, but Nicole and Jenni, they don’t give an inch.”

“I don’t need her telling me if I should or should not sit down. I came here not expecting to do it. I have to, like, prepare myself,” Deena continued.

Of course, the private convo was not as private as the conspirators thought as the entire resort had been decked out with mics and cameras for the show.

“I hope they know there’s cameras in the ceiling and that you’re being recorded at all times,” Ronnue remarked after passing by the scene. “Even I know that.”

“After 10 years of being on TV, the guys still doesn’t realize what you talk about on a reality TV show set gets caught on camera,” Vinny added.

When Ronnie’s roasting you for doing something dumb, you know you effed up.

But in fairness to Mike, producers on Shore historically have not shown incriminating footage to other castmates.

When Ron cheated on Sammi at Bed, Snooki and Jenni had to find an internet cafe and write a note.

They didn’t just show him clips from last night’s taping, ya know?

Anyway, here’s hoping that someone will sit down with Angelina eventually.

So far, this season has all the tension of a horror movie in which the killer decided to take some to recover following a dental procedure.