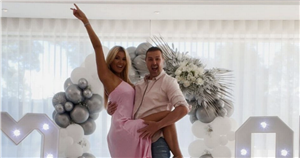 The celebrity couple celebrated their 10th wedding anniversary on Friday 4 June and the night included a romantic meal, flowers and a beautiful photoshoot.

Christine took to her Instagram to share with her over 500k followers photos from the glamorous anniversary shoot.

The model looked stunning in a pink fitted dress which had a thigh high split up one side and a pair of Perspex heels to finish the look.

Her long blonde hair was straight and hanging freely over shoulders. She looked tanned and was all smiles while husband Paddy was clearly elated grinning in some of the photos and he looked casual in blue jeans and a light pink shirt.

The celebrity couple clearly had fun with the shoot with some light-hearted shots showing the couple laughing alongside some romantic photos.

Christine captioned the post, “Happy 10th Anniversary love. If we have laughter, we have everything!” The former Take Me Out presenter also took to his Instagram story to celebrate the couple’s milestone and shared with his 1.8 million followers two snaps of them celebrating.

He shared a picture of the couple out for a meal both all smiles with sunglasses on and simply captioned the story, “10 years married today!”

He also shared a snap from the couple’s photoshoot where he had his arm around his wife and fist pumping in the air as Christine’s leg was sexily raised across him.

The couple have been together for 14 years and married on 4 June 2011. They share three children together, twins Penelope and Leo 7, and Felicity 5.

The mum-of-three has openly spoken out in the past about how all three of the couple’s children have been diagnosed with autism.

Paddy and Christine filmed a documentary on the BBC earlier this year about raising children with autism soon after all three children were diagnosed as being on the autistic spectrum.