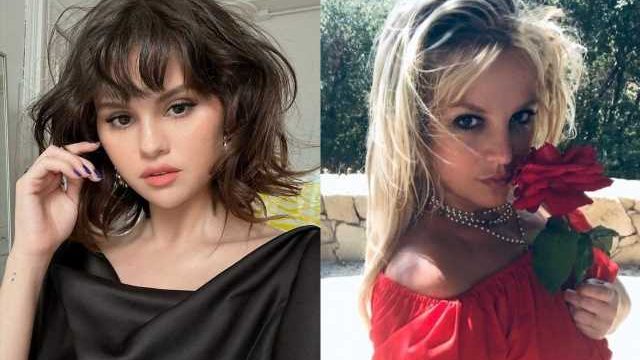 In the now-edited caption of her Instagram post, the ‘Toxic’ songstress appears to shade the ‘Monte Carlo’ actress over her 2016 AMAs speech, which contradicts her ‘Ice Cream’ music video with BLACKPINK.

AceShowbiz -Having taken aim at her family on social media, Britney Spears has now targeted a fellow celebrity in one of her latest posts. The pop icon has been accused of dissing her own friend Selena Gomez, who was invited to her wedding to Sam Asghari back in June.

On Tuesday, October 25, the “Me Against the Music” songstress appeared to shade the former child actress over her 2016 AMAs speech, which seemed to contradict her music “Ice Cream” video with BLACKPINK. Defending her sexy contents on Instagram, she wrote along with her new thirst traps, “Don’t you just love the nerve of women who stand firmly getting awards and speak on their beliefs about not showing their bodies on instagram ???!!!!! They say ‘This is NOT something I would do’ yet those women are the very ones who get 4 million dollar budget videos made about sucking and licking on homemade ice cream!!!!”

“These other girls have nothing but beautiful bodies !!!! Who cares if the flaunt it ??? THEY SHOULD !!!” the 40-year-old added in the now-edited caption. “So the next time I see someone with a big budget video sucking on lollipops yet giving righteous speeches shaming other women for exposing their bodies, I would like to tell those people don’t be a hypocrite as you suck on your lollipop having HUGE budget dreams … why would you stand firmly against girls getting attention JUST LIKE YOU and they have absolutely nothing.”

While Britney did not mention Selena’s name, her comments were seemingly in reference to the “Only Murders in the Building” star’s speech at the 2016 American Music Awards speech, in which she talked about the importance of mental health and not using one’s body to distract from being “broken inside.” The 30-year-old said while accepting the Favorite Female Pop/Rock Artist gong at the time, “I don’t want to see your bodies on Instagram. I want to see [what’s in your hearts]. I’m not trying to get validation nor do I need it any more.”

After reading Britney’s bitter remarks, many slammed the star for her hatred toward Selena and other women in general. “Hasn’t Selena battled lupus for years and had a kidney transplant because of it? It’s understandable she wouldn’t one to show her body off. What’s up with Britney’s weird energy against other women and their bodies,” one person reacted.

Another alleged of Britney, “this woman stays hating on a new woman EVERY OTHER WEEK.” A third user claimed, “she needs professional help, it’s not okay to be controversial about things that don’t affect anyone.”

Coming to Selena’s defense, one person wrote, “Here’s you not shame other women either..selena might b shameful but dont out here attacking every women just bc u’r bitter…” Another weighed in, “I swear britney being free has only shown her true colors,” while someone else opined, “Now I understand why her father locked her up, he was just protecting us from her.”

Britney has not responded to the backlash, but she has since removed the lengthy message and replaced it simply with three flower emojis.