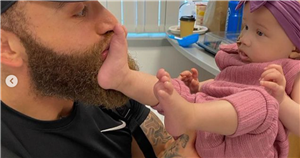 Ashley Cain has vowed to save thousands of children's lives in honour of his daughter Azaylia, with a new foundation.

The Ex On The Beach star, 30, and his partner Safiyya Vorajee were left utterly heartbroken when their daughter Azaylia was diagnosed with a rare form of leukaemia when the tot was just eight weeks old.

Azaylia's brave journey captured the heart of thousands across the world and the couple inspired 80,000 people to become stem cell donors and raised more than £1.5million for specialist treatment for Azaylia.

Then, in April tragedy struck as the tot died age eight months old. But, her heartbreakingly short life has left a lasting legacy.

Months of from Azaylia's passing in April, parents Ashley and Safiyya have set up The Azaylia Foundation, which launches on Tuesday 31 August, to help more children in their fight against cancer.

And Ashley has vowed to save thousands of children's lives to honour his baby girl with his "new purpose in life".

Reflecting on the tragic death of Azaylia, Ashley told The Sun: "This will be the most traumatic and terrible journey for so many people.

"We want to honour Azaylia’s legacy to help others. This is about getting children and their families through the worst time of their lives.

"These cancers are only rare because no one is talking about them and raising awareness. We have a new purpose in life.

"Helping other children in Azaylia’s name means more to us than the air in our lungs."

Ashley, who made a moving speech on his daughter's first birthday, revealed his daughter was sent home three times by doctors before she was diagnosed with acute myeloid leukaemia.

The reality star recalled having to see his baby daughter being treated with adult drugs and how he hopes to fund reasearch for an alternative treatment for kids.

He said: "I was told I could not change my daughter’s nappy without gloves on, because the chemo can come out in her urine and waste.

"If I can’t have that diluted version touch me, how can an eight-week-old baby have it pumped into her body through her veins, put into her organs? It is absolutely crazy."

While Safiyya added: "Babies cannot eat adult food but they are being given adult chemotherapy. It is so distressing to know that they are using such a toxic chemical on your baby.

"When adults are struggling, imagine how the baby must feel."

The couple also wish to financially support families who are going through the treatment process with the £1.5million raised for their daughter.

Ashley explained: "We want to be able to provide support for these children and their families. We know others won’t be as fortunate in their networks as we are, and these children need financial support.

"We haven’t taken a penny of this money personally. We will use it instead to help others less fortunate and their children."

For the latest news on Ashley Cain, Safiyya Vorajee and their amazing daughter Azaylia, make sure you're signed up to OK!'s daily celebrity newsletter.