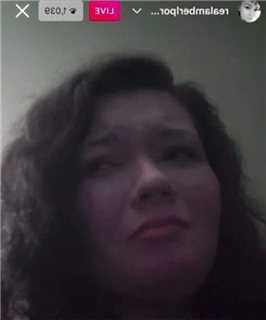 Amber Portwood has been reduced to tears.

And she doesn’t think it’s fair.

On Thursday night, the Teen Mom OG star tried to simply catch up with her followers on Instagram Live.

Toward the end of her back-and-forth, however, Portwood simply couldn’t take it any longer.

She broke down in the wake of allegations made in court by ex-boyfriend Andrew Glennon in regard to her alleged history of drug abuse.

Her alleged recent history, according to Glennon, who filed recent legal documents that claimed Portwood has been smoking meth of late, citing instances where she acted bizarre during an exchange of the former couple’s young son, James.

During an exchange of the three-year old on October 16, Glennon said in these documents that the MTV personality was “acting erratically, speaking frantically, and appeared completely paranoid and disheveled.”

What made Glennon think these supposed actions were due to substance abuse?

Glennon said he has “witnessed Amber under the influence of illegal drugs previously, specifically methamphetamine,” and therefore has a reason to believe she’s at it once again.

Glennon added in the papers that Portwood’s October 16 behavior was “substantially similar to that which he has previously witnessed.”

Portwood’s legal team strongly denied these allegations in an official legal response — and now Amber has addressed them on social media.

“I did everything to do better, and I did nothing to deserve this. Not today at least,” Portwood told fans on Thursday.

“I miss you! Hope you’re doing well!” the mother of four commented, seemingly unaware of what’s been going on with Portwood.

After witnessing the pain her fellow MTV personality was clearly suffering from, Lowry added:

“Y’all, I have no idea what’s going on. I feel bad I’m out of touch. But send Amber some love.”

What’s been going on, of course, is that Portwood got arrested for domestic violence back in July 2019 and has been battling Glennon for custody of their son ever since.

The legal battle has turned rather ugly of late, too.

Days after Glennon submitted the aforementioned documents, and even requested that Portwood take a hair follicle test, Amber issued a formal reply.

“Mother has exercised her parenting time with the parties’ child without any incidents regarding any type of substance abuse,” read the official reply by her attorney.

Through her attorney, the mother of two explained that she’s still on probation from her arrest and is required to submit random to monthly drug screens.

She has never failed any of these tests.

Mother denies adamantly the allegations made in Father’s Motion and believes that a hair follicle test is unnecessary due to her history of negative drug screens and continued requirement to submit to same.

Mother further states that Father’s Motion is nothing more than yet another attempt to paint Mother in a negative light.

Mother verifies that she has not used any substance, except for prescription medication taken within the therapeutic limits.

To wrap up this week’s Instagram Live session, meanwhile, Amber fought back tears as best she could and told listeners:

“All I’ve been doing is trying to work on myself and be a better person. And I get attacked for no reason…

“I did things to better myself, to make sure I’m still alive today, and I’m attacked for it.

After breaking down during her IG Live, Amber wrote in an Instagram post that she’s trying to stay positive, adding:

“I have so many mothers who are ashamed because of their past or they are not perfect. It really hurts to hear these stories and the hate they face as well.

“I can say that so many of us are wanting to grow and be successful for ourselves and our families.

“My tears were real and raw and I’m not ashamed to be rough around the edges!

“Nobody is perfect. If you are a strong woman trying your best than keep moving. It’s ok to cry every now and then.”