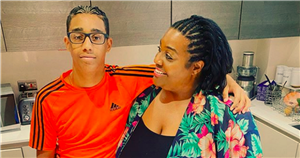 Alison Hammond has admitted that she is incredibly concerned about the possible side effects her son Aiden, 15, could have when he gets the coronavirus jab.

The 46-year-old made the revelation as she hosted This Morning alongside co-host Dermot O’Leary, 48, on Monday 31 May. Dermot and Alison spoke to epidemiology expert Professor Tim Spector from King's College London during the show.

Alison said: “I'm so worried about the vaccine because I don't want to get a blood clot, I'm really enjoying this job.

Alison’s fears stem from findings that two Covid-19 vaccines, one manufactured by Oxford-AstraZeneca and the other by Johnson & Johnson, have been linked to rare clotting disorders.

Chatting to the presenters via video link, Professor Spector reassured Alison that the odds of getting a blood clot from the jab were very low.

He said: “Your risk if you got Covid is very much more than having a blood clot which is around one in 300,000 – it's extremely low.”

Professor Spector went on: “You're much more likely to get long Covid and be sick for several months. For kids, we're not seeing problems with the vaccine in those countries that are doing it so far.

“We've got to make this balance between wanting to get schools back to normal. It's never going to be 10% safe.”

Research into AstraZeneca's vaccine shows it has been linked to 309 clots and 56 deaths in the UK out of 33 million shots.

Meanwhile, the Johnson & Johnson single-dose vaccine has been linked to 28 cases in the US out of more than 10.4 million shots.

Last week Alison and Dermot were both guests on Lorraine where they admitted that they hadn't been each other's biggest fans when they were first matched for This Morning.

The duo revealed they had a series of frank chats on what they didn't like about each other's presenting styles, with Dermot confessing to having been irritated by Alison's looks to camera while he was talking.

After taking over Fridays Alison from beloved husband-and-wife presenting duo Eamonn Holmes and Ruth Langsford at the beginning of the year, they had to work hard to perfect their on-air chemistry.

"We were thrown together on a Friday a bit like an arranged marriage and it took about two months before we became comfortable."

Dermot agreed that the first two months together had been tough: "You know what it's like, when you start a show and you work with someone…you go out for lunch…we were on air in half an hour.

As Lorraine laughingly asked what they possibly couldn't like about each other, she was unprepared for the honest answer.

Alison said: "We told each other what we don't like, we were so honest and I think that's why it's worked.

"We had a few private chats and we said I don't like this about you, well I don't like this when you do this. They were really tiny things, but the fact we were honest and were able to talk to each other, I think that's why it's worked. I trust you now."

Dermot nervously explained: "Can I just go back, it wasn't like we didn't like each other! It was more like, oh I didn't know you were going to do that and it threw me.

"As soon as you have that honesty, now I can talk to you like I talk to my wife."

It sounds like things are a little happier now, as Alison said: "The things that I didn't like, now I love."