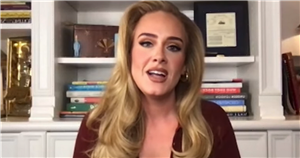 Adele has revealed she's set to do a One Night Only special on CBS on 14 November to promote the release of her album 30, which comes out five days later.

The 33 year old took to her Instagram feed to announce the news with her 42.2 million followers, simply captioning it: "CBS – November 14".

The primetime special will welcome the star back into the spotlight and will be an opportunity to hear her first new material in six years – including Easy On Me.

It will be filmed in Los Angeles, where she lives with son Angelo, and will include some of her best hits as well as never-before heard songs.

It will also feature an exclusive interview between Oprah Winfrey and Adele from "her rose garden".

The announcement read: “In Adele’s first televised wide-ranging conversation about her new album, the stories behind the songs, life after divorce, weight loss and raising her son.”

Check out all the latest hot topics on OK! magazine’s news section and discover exclusive celebrity news about your favourite soap actors and reality stars.

We're also on Facebook.com/okmagazineuk – for the latest online celebrity news, features, galleries and videos throughout the day from your favourite site.