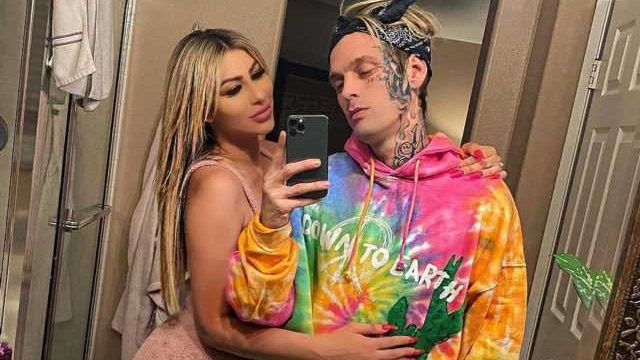 Melanie Martin, who previously filed a restraining order against the singer/rapper, declares that he never hit her and that ‘he is definitely NOT a drug abuser.’

AceShowbiz –Aaron Carter‘s ex-fiancee has issued an apology for accusing him of physical abuse. Claiming that the singer/rapper never hit her, Melanie Martin cited postpartum depression as the reason why she brought up the allegations.

“Just wanted to make a statement I’ve had a bad time with post pardom [sic] depression. Aaron never hit me I was angry because I mad a mistake a bad one,” she penned in an Instagram post. “And we were arguing A LOT because he was trying to break up with me for what I did.”

Insisting that “Aaron is definitely NOT a drug abuser,” Melanie said she has “been a witness to it for two and a half years and there [sic] are a lot [of] claims that he is online it’s completely untrue.” She then stressed, “I’ve been here the whole time!!!”

“He takes care of his mental health and is serious and has been working with a doctor for 2 and a half years and I want to make it VERY CLEAR ABOUT THAT,” she went on elaborating. “Because of all the claims about him I fell down the stairs manyyy times and I’m dropping all charges.”

Melanie also divulged that she’s “going to the doctor to get help with my POST PARDOM DEPRESSION [sic] AND MY SONS WELL BEING IS THE MOST IMPORTANT THING TO ME.” She continued, “IM NOT SURE IF HE WILL FORGIVE ME BUT I WANT HIM TO KNOW IM SORRY AND THAT I SAID THINGS THAT WEREN’T TRUE AND I MADE A MISTAKE. AND I WANT TO BE HONEST TO EVERYONE and the WORLD AND MAKE THIS RIGHT.”

Melanie filed a restraining order against Aaron in late February. In legal documents filed in Los Angeles Superior Court, she claimed that they had a fight six days prior over her talking to another man when they already broke up.

“We had a fight about me talking to another man while we were broken up. He punched me in the left rib and pushed me,” she detailed their fight, per The Blast. “I didn’t feel the pain until a few days later, then I left the house because he threaten to give me a restraining order.”