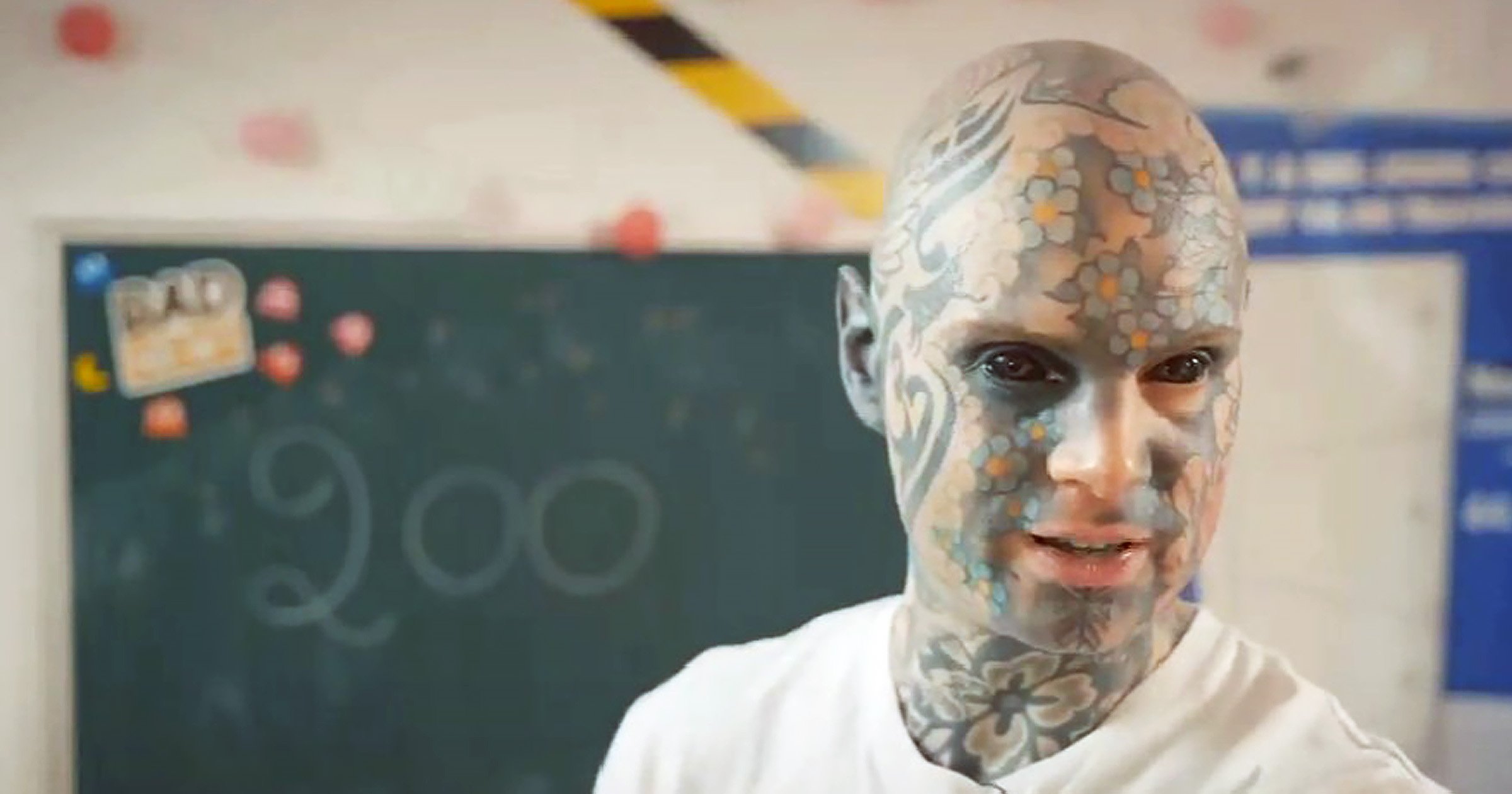 Is this man the most tattooed teacher in the world?

Sylvain Hélaine, 37, has spent an estimated total of £57,000 over the years on getting inked and body modifications.

He’s had his nipples and belly button removed – to offer tattoo artists a smoother canvas to work on – and is almost 100% covered in ink, including his tongue, the palms of his hands, his gums and even his eyeballs.

Sylvain, from Paris, France, has a few jobs, but by day he teaches primary school-aged children and says the kids accept him pretty much instantly.

He also works as a model, performer and comedian. He said: ‘I see my art as only one piece, one full bodysuit that has evolved with time. I am on my second layer now.

‘My tongue is tattooed, nipples removed, and belly button removed, because I wanted to be smoother, to be easier to be tattooed.

‘I also had 15 beauty spots removed. It was an idea to be a more pleasing canvas.

‘I will end up with a full block colour of black all over, maybe when I’m 80 or 90, as it’s easier to be tattooed in darker tones.’

‘Tattoos are infinite, being covered layer after layer is infinite and full of hope.’

Sylvain’s tattoo journey began ten years ago when, in London, he had something of a quarter-life crisis.

‘I was a teacher there, wearing a suit and tie.

‘I was in Brixton and the banker at the HSBC had his neck tattoo and the guy in McDonald’s had both sleeves done, and it was an eye-opener for me.

‘I did my first layer in three and a half years, I completed it in Paris.’

His father and sister were very accepting of his decision to get covered in ink, but his mother was initially hesitant.

However, after seeing his look as a career choice, she’s become accepting of it.

‘My father and my sister were always supportive,’ he said.

‘My mother had some trouble accepting it at first, but she knows it’s a job, and she fully accepts it.

‘My appearance helps me on a daily basis as it’s like a natural filter, people love me or hate me. There is no in-between. It’s helpful.

‘I have never experienced any issue with my appearance on the street, no hatred.

Sylvian says the only negativity he receives is when he speaks out and makes headlines due to his appearance, but he says that on his own social page, ‘there are no haters.’

Sylvian has had a strange reaction on dating sites though.

He said: ‘The weirdest thing is dating websites. Because of my appearance, some women think I’m violent, dangerous, and criminal.’

As for his teaching career, Sylvain says the kids pay his unique look no mind.

‘I currently have 29 kids in my class. I teach between seven and 11 years old,’ he said.

‘The kids don’t care about the tattoos.

‘They don’t have questions, the main change for them is that I am male as this is typically an older female job. My colleagues are in their 40s and 50s with several children.

‘After two minutes the kids accept me. It takes two days for the parents and two weeks for the grandparents.

Sylvain has absolutely no regrets about going under the needle.

But he does have a warning for those wanting to get inked.

‘If you want to get tattooed, wait a little bit. I was 27 when I got my first tattoo. I was mature enough to know I made the proper choice.

‘Wait to have a proper job, you don’t want your tattoos to interfere with your job or professional life.

‘I have never regretted any of my tattoos.’