With apologies to all you stans of Antoni Porowski’s Strokes T-shirts and avocado recipes, the breakout star of Netflix’s Queer Eye reboot was easily Jonathan Van Ness. A hairdresser by trade, the show’s resident grooming expert turned his winning personality into an empire: multiple TV spinoffs, bestselling memoirs, a haircare line, and a close friendship with Taylor Swift (his cats apparently know her as “Aunt Taylor”).

This month, he’s touring Australia with his Imaginary Living Room Olympian tour, where he’ll perform standup, stories and [checks notes] gymnastics. I think. Why don’t we just ask him? 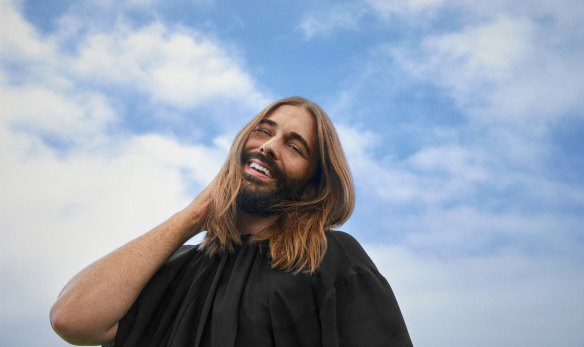 Hi, JVN. Where are you speaking from?
Austin, Texas. This is where I live. It’s very green, very nature-y… [fumbles with Zoom] I’ve got in my notes that this was supposed to be an audio-only interview. Do you want me to be on video?

Oh! No, whatever you want. Do you want me to turn my camera off to keep us on an equal footing?
No, it’s okay. I could look at those gorgeous eyebrows all day long, honey.

[Blushes] OK! I told my partner I’d be interviewing you, and she showed me the clip where someone did you on RuPaul’s Snatch Game. That’s proof you’ve made it as a cultural icon, when you’ve been impersonated on Snatch Game. Have you seen it?
Of course, honey, I don’t live under a rock. I definitely saw Denali do that, it was amazing. It’s always surreal when things like that happen, but that was definitely cool. 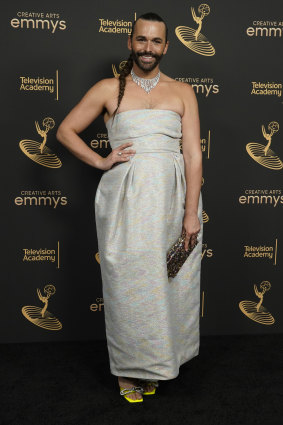 Do you have a comfortable relationship with how people perceive you? I assume you’re exactly the same person in public and private.
Yeah. I mean, one thing that feels a little disappointing, honestly, is like, I know it’s a joke and I love Denali and it’s an honour for that to happen but, like, I’m a comedian, I’m a writer, I’m a producer – there are a lot of things I’ve done outside of Queer Eye. I love who I am on Queer Eye and that is who I am, but there’s also a lot more to me than that, you know? Sometimes it’s like, do people just think I say “honey sweetie baby” all the time?

That’s not a read on Denali, because I’ve felt that often. I just think, sometimes, especially with queer people, there’s this knee-jerk reaction to dismiss and just write us off, especially if you’re, like, transfem. It’s just weird with public perception sometimes because you are more than what someone may see of you, you know?

So, I guess this upcoming tour is you showing off these other unexpected aspects of yourself. I saw on Instagram you described it as “a night of gymnastics, queer joy and unhinged comedy”. What are you doing, exactly?
Well, the show opens up with me in a stunning bedazzled rainbow leotard and, if I do say so myself, I do this incredible gymnastics routine on a tumble track, which is an inflatable, like, nine feet wide by 20 feet long bouncy platform. I guess that’s like, three metres wide by, like…

Yes, thank you, I needed the conversion into the metric system.
I dunno, 10 metres long? I’ve been doing standup consistently now for four years. Prior to Queer Eye, I’d tried my hand at it but not really ever taken it seriously because, like, I was a hairdresser and needed to do my clients’ hair. But one day in late 2019, I was performing in Portland, and as a former cheerleader we like to do this party trick where once a year you’re just like, “Wanna see a backflip?” And so that night I just threw a standing back handspring onstage, and it was like, “Argh, amazing!” And so, it occurred to me, like, “Girl, why just do comedy when you could start the show with a gymnastics routine first?” 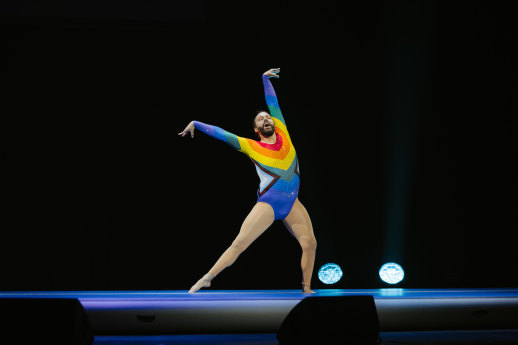 JVN shows off his gymnastics skills on stage.

Your books are quite raw and revealing. Do the shows have much of that?
I mean, I’m definitely making some HIV jokes in there. It’s not dark but it’s a little more shocky, a lot of stuff that I can’t really say online. Another thing for me, and it’s something I write about a lot in Over The Top and Love That Story, is that some of my biggest traumas live right next to my biggest joys.

That sounds like the core of comedy.
Exactly. That’s what we do as comedians, we push that boundary. I always like to say that if I couldn’t make jokes, I’d be in my mum’s basement eating Pop Tarts for the rest of my life.

I’ve seen some videos of you flipping around on Instagram. What’s your thing with gymnastics about? Did you do it through high school?
Yeah. I really wanted to learn to do gymnastics as a kid, but I had no natural ability. But I tried out for cheerleading as a joke in eighth grade, when I was about 14, and I made it and I fell in love with it. I loved the girls, I loved the sport of it, and every day I was like, “I’ve gotta get my tumbling in.” I went through school and I cheered in college, but I got a really bad GPA, so I got kicked off the team at the end of my first semester.

Like a true athlete.
Yes, it was devastating. But those two-and-a-half years of gymnastics in high school, that was really where I made friends and realised I could do something if I set my mind to it. I’m, like, six feet tall and I really could not figure it out, and I was really afraid. Then when I finally learned it, it was this huge sense of accomplishment and relief. But then I became a hairdresser right after that and, you know, you had to protect those hands and wrists.

Not that 35 is old, because I’m already older than that. But gymnastics seems like a young person’s game. Is it hard to do at this age?
In certain ways, but it’s also interesting because I actually have more advanced skills now than I did in college, and I’m definitely stronger. I mean, it’s started to hurt going from doing the gymnastics to then standing onstage in skinny stiletto heels for an hour-and-a-half, but I feel that’s the heels more than the gymnastics.

To read more from Spectrum, visit our page here.