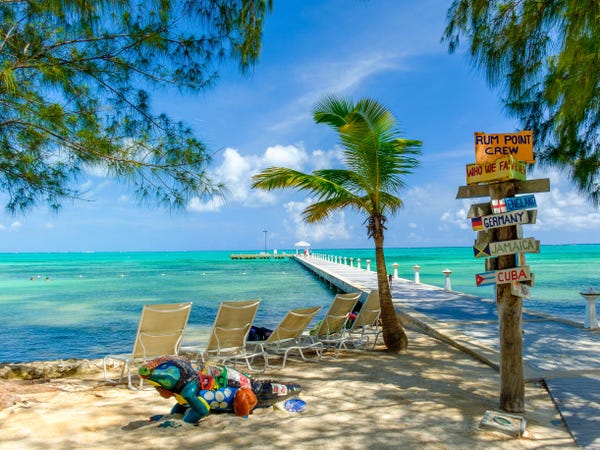 Following in the footsteps of destinations like Barbados, Estonia, and Dubai, the Cayman Islands announced an initiative to entice remote workers to relocate their home offices somewhere a little more exotic — and perhaps safer.

But while the new program is pretty similar to other countries', there's one big difference: To apply, workers must prove financial independence — and then some.

The coronavirus pandemic has already deepened economic inequality — or, in the very least, made it even more apparent.

When the pandemic first hit, the wealthy escaped densely populated urban cities for remote vacation spots and second homes, some even buying extra freezers to stock up on groceries.

CBS News reports that while more than 29 million people are collecting unemployment benefits, "the net worth of the more than 600 billionaires in the US grew by about 20%" in the first three months of the pandemic.

Remote work visas and digital nomad programs with hefty income minimums only seem to highlight that rift, demonstrating how differently the wealthy are experiencing the global pandemic.

The Cayman Islands' remote work program is not the only one with a minimum income requirement, though its minimum is by far the highest

The typical American would not qualify for any of these programs.

Moses Kirkconnell, the minister of tourism and transport, told Insider that the minimum for the Cayman Islands was chosen based on the average income of the 500,000 visitors the islands had in 2019, and that $100,000 was on the lower end of what those visitors earned.

"We are not an inexpensive cost of living country," Kirkconnell said, explaining that because there are no income or property taxes on the islands, they rely on import duty, which means that anything arriving on the islands, from food to cars to furniture, gets taxed 15% to 20%, increasing the cost of restaurant meals and groceries, for example.

"We believe it would be a little bit tough for you to be able to actually live here," Kirkconnell said of those making less than $100,000.

However, on the Cayman Islands, the average family income is $62,407, according to Kirkconnell. And according to Cayman Resident, a local guide, a childless couple could comfortably live off of half that, with estimated monthly expenses of around $5,400, or $64,800 a year.

Kirkconnell believes that giving people a sense of how much they'll need to live comfortably allows them to make a more informed decision when comparing remote work programs.

He said he thinks the Cayman Islands have an edge over other programs thanks to their culture and infrastructure, as well as being "basically COVID-free."

The Cayman Islands have managed to keep coronavirus cases low, in part thanks to a mandatory quarantine for all arrivals

COVID-19 risk in the Cayman Islands is currently low, the CDC reports.

Masks and social distancing are no longer required.

The Cayman Islands began a phased reopening on October 1, which now includes anyone approved on the Global Citizen Concierge Program, who are allowed to stay for up to 24 months.

All arriving travelers must undergo COVID-19 testing upon arrival and again after 14 days, during which time they must be quarantined.

The options for the mandatory two-week quarantine are at a government-run facility, a private facility, or at home, but wearing a device with monitoring technology.

There are no taxes whatsoever in the British Overseas territory.

According to Britannica, the Cayman Islands are "one of the largest financial centers in the world," thanks to the "absence of direct taxes and to liberal banking laws that generally ensure confidential transactions."

Almost all of the world's major banks are registered in the Caymans.

And if you earn almost triple what the typical American makes, you, too, could find a haven there.

It is important to note that while the Centers for Disease Control and Prevention no longer advises against nonessential travel, it does warn that "travel increases your chance of getting and spreading COVID-19."

Kate Middleton and Prince William’s Christmas tree is bigger than most people’s house
We and our partners use cookies on this site to improve our service, perform analytics, personalize advertising, measure advertising performance, and remember website preferences.Ok