A WOMAN who was told her suitcase was over the weight limit had a genius way of avoiding paying the excess – by wearing all of her clothes.

Gel Rodriguez managed to reduce her suitcase from 9kg to 6.5kg thanks to the number of layers she wore. 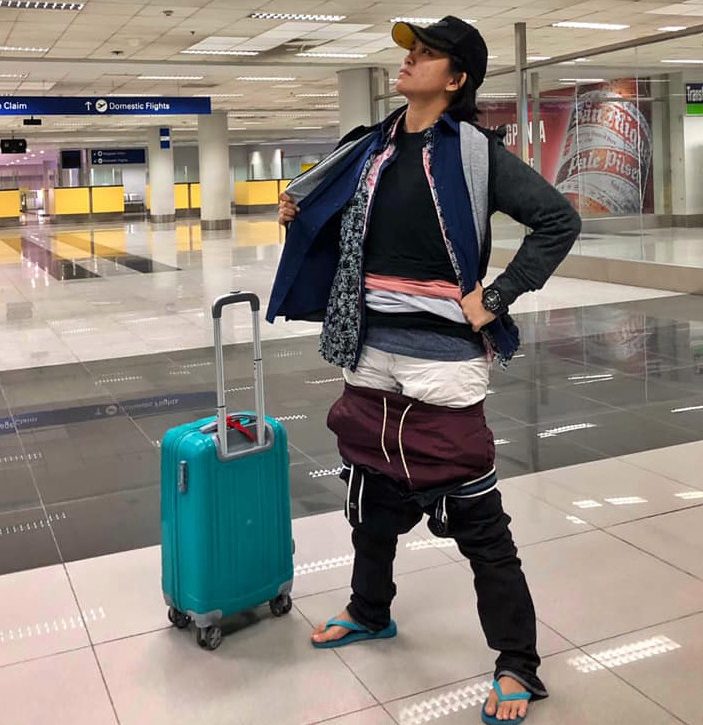 Posting a picture to Facebook, Gel posed in her outfit with what appeared to be at least three tops, two pairs of trousers and four cardigans.

It isn't clear which airline she was travelling with.

"Me: NO PROBLEM! *from 9kg to 6.5kg baggage #ExcessBaggageChallengeAccepted."

She told Vice that she "didn't want to pay" the fee because the excess weight was so small.

However, she didn't advise other passengers to try the same method.

Gel added: "It was really hot."

Facebook users were fans of the technique, with many posting laughing emojis.

It is hardly the first time a passenger has resorted to extreme measures to avoid paying extra money.

A Thomas Cook passenger avoided the £65 excess fee earlier this year by wearing four dresses, two pairs of shorts and a dress around her neck.

Many compared her to Joey from Friends after looking much bigger due to the volume of layers.

Another man put on 15 tops to avoid paying the £96 baggage fee with easyJet.

Two easyJet passengers were stopped from boarding their flight unless they paid extra for their hand luggage, despite it being free to take a cabin suitcase.

A student shared how to take 50 items of clothing as well as nine pairs of shoes in one bag.

We've revealed the best – and worst – airlines for baggage fees.