Come all ye faithful: Why a festive tour of these ancient cities will lift the spirits

O little town of Bethlehem, how still we see thee lie, above thy deep and dreamless sleep, the silent stars go by.

As I waited to enter the 1,700-year-old Church of the Nativity, in the biblical town of Bethlehem, the words of the carol came flooding back.

I used to sing it solo as an altar boy, growing up in Swindon. 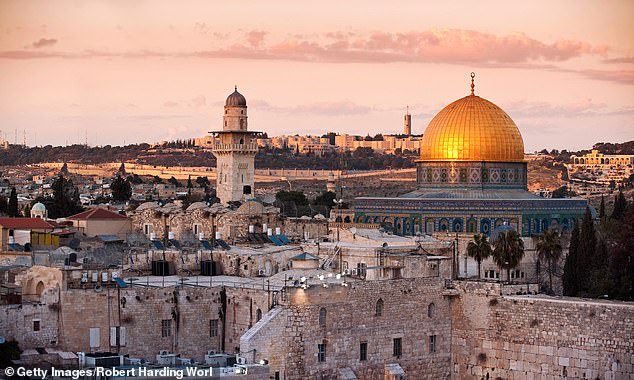 Andrew is moved by the history emanating from the walls of the Old City of Jerusalem. Pictured is the city’s Dome of the Rock

Now, almost 50 years later, I was excited at being so close to the reputed birthplace of Jesus. Some people were praying or holding hands; others were crying. One or two twits were wearing Father Christmas bobble hats. Americans of course. And then it was my turn to touch the star on the floor of the cave, supposedly the very spot where He was born.

Outside, the aptly named Manger Square was ablaze with festive red and green lights as traditional carols, in Arabic, were broadcast over loudspeakers.

Bethlehem is under Arab control. It’s rammed on December 24, but as the Orthodox and Armenian Apostolics, who are also part of the Nativity church, conveniently celebrate Christmas on different days in January, you can take your pick.

The church was a highlight of my first tour of the Holy Land. The trip was fixed up, complete with itinerary and guide (Yehuda), by Kirker Holidays, which has decades of experience in Israel. Brimming with knowledge, Yehuda’s passion for the region was also infectious.

He drove us a short distance to Beit Sahour, the field where the shepherds first saw the star that guided the Three Kings. Sadly, not a sheep in sight.

While I am a Roman Catholic, you don’t have to be a believer to feel the tremendous energy in Bethlehem or to be moved by the history emanating from the walls of the Old City of Jerusalem. Walking along the Via Dolorosa, or the Way of Sorrow, you follow in the footsteps of Christ carrying His cross on the way to His crucifixion. 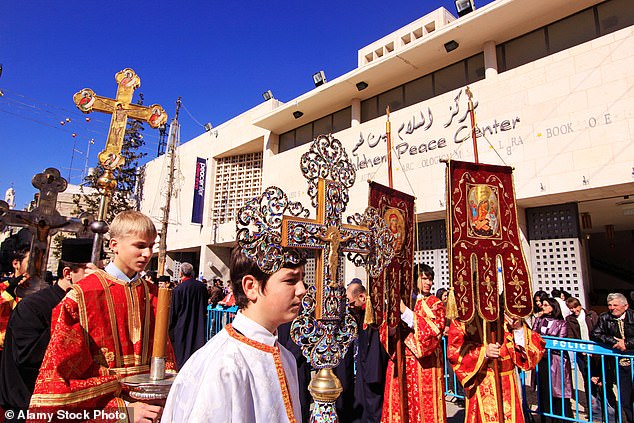 An Orthodox Christmas procession through Bethlehem, where Andrew visited the Church of the Nativity

As we stopped for coffee in one of the best known cafes, the owner, Al Mufti, was on his knees praying towards Mecca. As he chanted, Christian pilgrims walked past his shop, singing and clapping.

The episode underlined the glorious diversity and contradictions in this city, where people eat, sleep and sell souvenirs in the narrow alleyways, next to ancient sacred sites.

I was staying at the stylish Mamilla hotel, which is at the junction between the old and new Jerusalem overlooking the Old City walls. The hotel’s luxury spa was a soothing distraction from the hubbub on the streets of Jerusalem.

Yehuda also took me to the Garden Tomb, run by a British trust, which is thought to be the spot where Jesus was buried and rose from the dead. Even if He didn’t, coachloads of pilgrims arrive by the hour to spend time in the peaceful garden which was the inspiration in 1884 of General Gordon.

The commander wrote home on a trip to Israel in 1883: ‘I feel convinced that the Hill near the Damascus Gate is Golgotha… You can see the Temple and the bulk of Jerusalem.’ He never had time to enjoy his garden. He was killed in the siege of Khartoum in 1885. 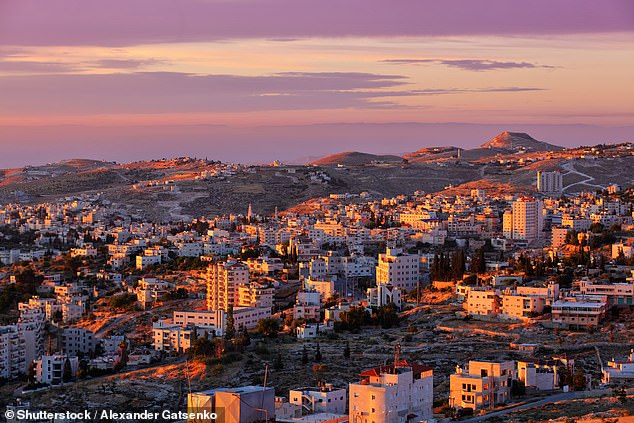 Sunrise in Bethlehem, a city that’s under Arab control. It’s a very busy place on December 24

Next stop was Capernaum, marketed as the ‘town of Jesus’ as He lived there, by the Sea of Galilee, for three years.

As I boarded a boat to cross the lake, fishermen were throwing their nets into the water in a scene that could have come straight from Zeffirelli’s Jesus Of Nazareth, which I watched at school.

The turquoise waters, fringed by salt and set against the reddish sandstone cliffs of the Judaean Desert, make for a stark and beautiful setting.

In the Dead Sea, ignoring the advice to float on my back, I tried swimming on my front then capsized, cooling off afterwards in the therapeutic mud.

We drove on 90 miles to the scene of the Sermon on the Mount (the views are spectacular), where Jesus apparently turned a few loaves and fishes into food for the 5,000. I could have done with Him at the fabled St Peter’s restaurant, which had run out of fish.

I spent the last few days in vibrant Tel Aviv, in the art deco Norman Hotel. It’s walking distance from the shops and bars around the Great Synagogue in Allenby Street. The hotel doesn’t keep kosher, so I could have bacon and eggs for breakfast. It was like being back in Bethlehem. Christmas had come early.

Kirker Holidays (kirkerholidays.com, 020 7593 1899) offers three nights at The Norman in Tel Aviv from £1,498pp, or three nights at the Mamilla in Jerusalem from £1,389pp, including BA flights, transfers, B&B accommodation and the Kirker concierge. A seven-night tailor-made itinerary starts from £1,977pp including Jerusalem, Tel Aviv, Tiberias and the Sea of Galilee.