Though Mr. Miller, 41, no longer competes (he retired in 2017, three years after becoming the oldest man to win an alpine ski medal at the Games), he still loves to ski, and brings two pairs wherever he goes. “When I was competing, I was generally traveling for four events at a time, and I’d bring around 100 pairs,” he recently recalled. “If we tried to narrow it down, we could get down to 65 or 70.”

One of his favorite off-the-beaten-track places is Paganella, Italy. “It’s one of those spots that doesn’t really pop up on anyone’s radar unless you happen to live south of the Alps. Because it’s tucked up in the mountains, the elevation changes really quickly there. And it’s beautiful beyond belief — with a lake, an incredible landscape and great terrain.”

His top pick for domestic skiing is Jackson Hole. “Even though it’s well-known, it’s a gem,” he says, recommending it for skiers looking for a challenge. “In most places, the terrain that you can access via lift is fairly limited unless you’re willing to hike, or trek, or heli-ski. At Jackson, you take the tram up to the top and you have the fingers there, which are cornices into narrow shoots, and are normally only available with heli-skiing type operations. It’s really amazing to have those available via the chairlift.”

Here’s what he can’t travel without.

“I bring my Full Tilt boots, which is probably unusual, in that Full Tilt is still the old Raichle three-piece boot from 35, 40 years ago. I believe it’s the best boot that was ever built up to this point.” 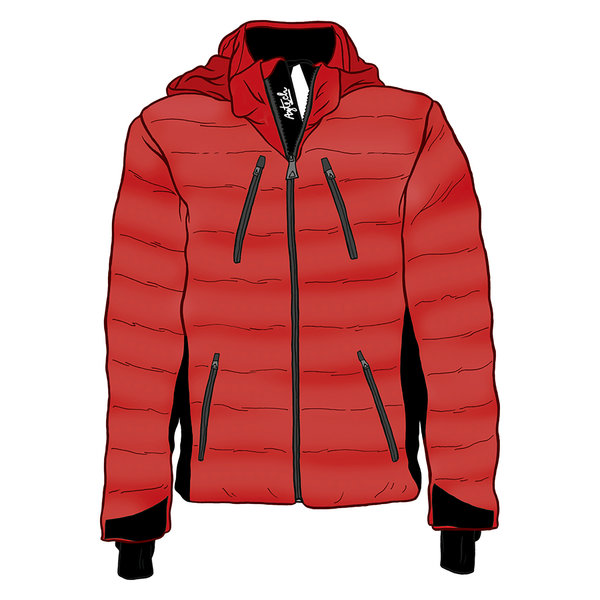 “I think there’s nothing more important than your preparation for the conditions. If you’re going skiing, the difference between having an amazing trip or having a very frustrating or angering trip can be your preparation and your clothing. For me, it’s the area that you want to skimp on the absolute least. I ski in Aztech clothing [Mr. Miller is part-owner of that company] and I have a Nuke Suit that’s Aztech’s premier ski jacket. To me, that’s what separates a lot of people from myself when they go to different resorts. If the weather’s great, they’re having a great time. If it gets cold and windy, and snowing, or rain then turns to snow, they’re miserable and they need to be inside. But I’m still out there.”

“I use these X-Bionic socks that are, in my opinion, very necessary. The reality is, if you’re skiing hard all day and then you take socks off and you don’t do anything, your feet will puff up because there’s a lot of pressure and squishing in your feet. So I have pretty hard compression socks for afterward that tend to make you recover faster. If you’re doing multiday ski trips, you don’t want to get residual fatigue.”

“One of the important things is extra lenses for your goggles, and I think everybody forgets that. When it’s bright sun out, I need dark lenses in my goggles because otherwise my eyes get tired, and I get headaches. But then if you start off the day when it’s sunny and bright, and you have dark lenses and then clouds come in, you can’t see anything and it becomes dangerous. So having different lenses for your goggles that you can switch out is, I think, something that needs to be shared with the average skier. I keep usually three or even four lenses with me.”