A ZOO in China has sparked controversy after gluing a basket to the back of a tortoise so "tourists can throw coins in it for luck". 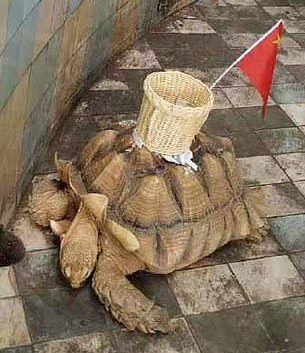 The basket was glued onto an African-spurred tortoise, which has been categorised as 'vulnerable' by the International Union for Conservation of Nature (IUCN).

The tortoise also had a Chinese flag stuck on its shell.

According to local media, a zoo worker at Nanning Zoo identified as Ms. Zhao responded angrily to the social media post.

She replied: "We had an orangutan that died and no one cared. Now everyone is condemning us for sticking a basket on a tortoise's shell!"

However, Wei-tia, a science blogger said the "tiled pool" was not an appropriate enclosure for the animal. 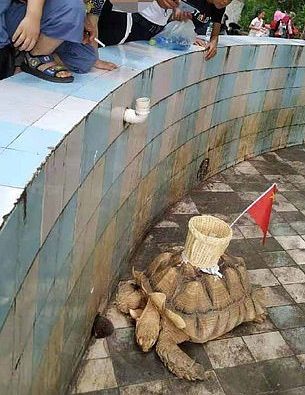 PETA Asia press officer Keith Guo told AsiaWire: "Tortoises belong in the wild, they are not a tool for people to make money.

"The zoo should listen to the outcry of the Chinese public and send the tortoise to a sanctuary.

"As with other animals in zoos in China, UK, US and elsewhere, they are denied everything that's natural and important to them, and every aspect of their lives is manipulated and controlled."

Reports said that the zoo has yet to issue a statement addressing the public criticism, but local media suggested officials were "discussing" the incident.

It is considered good luck to throw coins in Chinese culture – which one man found out the hard way after being arrested when he threw money near the engine of a plane while boarding.

The new-dad was caught throwing three coins at the plane while he was entering the cabin as it was his daughter's first flight – but was caught and arrested for ten days.

Other odd superstitions around the world such as cutting your nails in the dark and whistling indoors are seen as bad luck.

Some airlines don't even have a row 13 or row 17 as some cultures deem them unlucky.