From an eatery inside a giant crab to a McDonald’s modelled after a Happy Meal box: The world’s weirdest shaped restaurants

If you’re hungry for something different, then these odd-shaped restaurants might satisfy your appetite.

MailOnline Travel has scoured the world for some of the wackier examples of food-themed architecture, with eateries modelled after chickens, cows and even McDonald’s Happy Meal boxes.

The majority do what they say on the tin, with a chick-shaped building in Georgia serving up fried chicken and a hot dog-shaped van in Los Angeles serving up sizzling sausages.

Customers enter the Longhorn Grill in Arizona through a giant cow skull, with its horns pointing to the sky while a cow-shaped coffee shop in Auburn, Washington, is also known for its scantily-dressed baristas.

And Tail O’ the Pup in Los Angeles, California, was built in 1946 and is shaped after a mustard-filled hot dog.

Scroll down to feast your eyes on the bizarre… 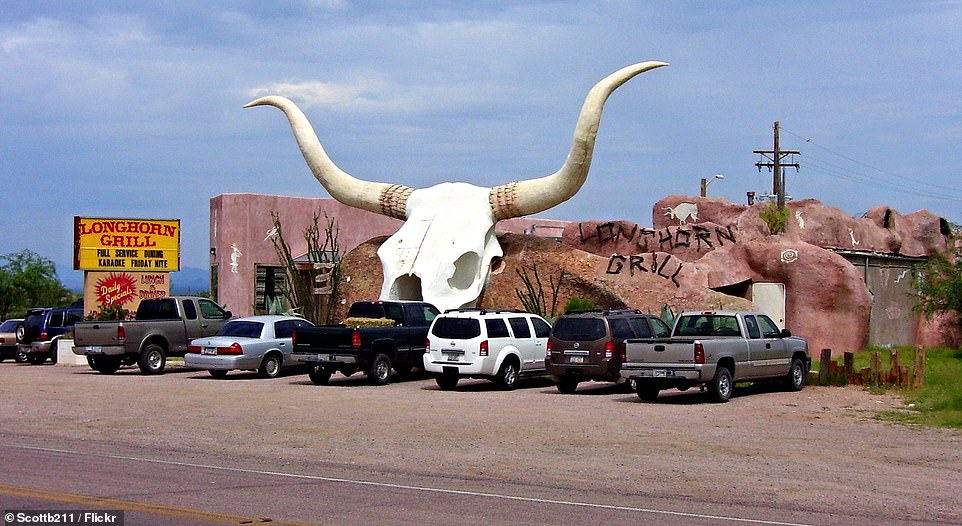 The Longhorn Grill has been an iconic destination for decades and, according to its website, ‘one of the most photographed locations in southern Arizona’. Customers must enter the venue through a giant cow skull with its horns pointing up to the sky. It houses a BBQ pit that can cook over 100 burgers at a time and the main dining room seats 60 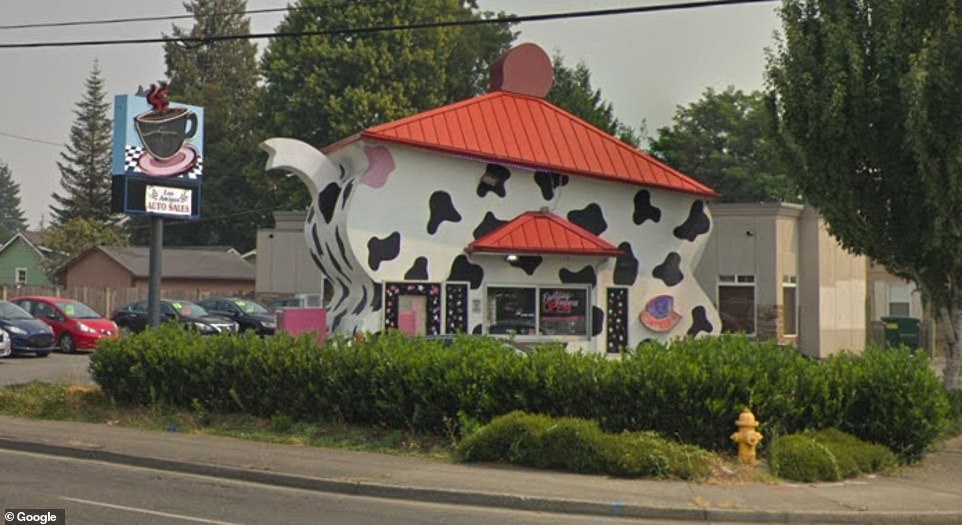 This cow-shaped coffee shop in Auburn, Washington, is also known for its scantily-dressed baristas, serving beverages and baked goods in bikinis. The Cowgirls Espresso chain has several outlets, but this is its most eye-catching venue 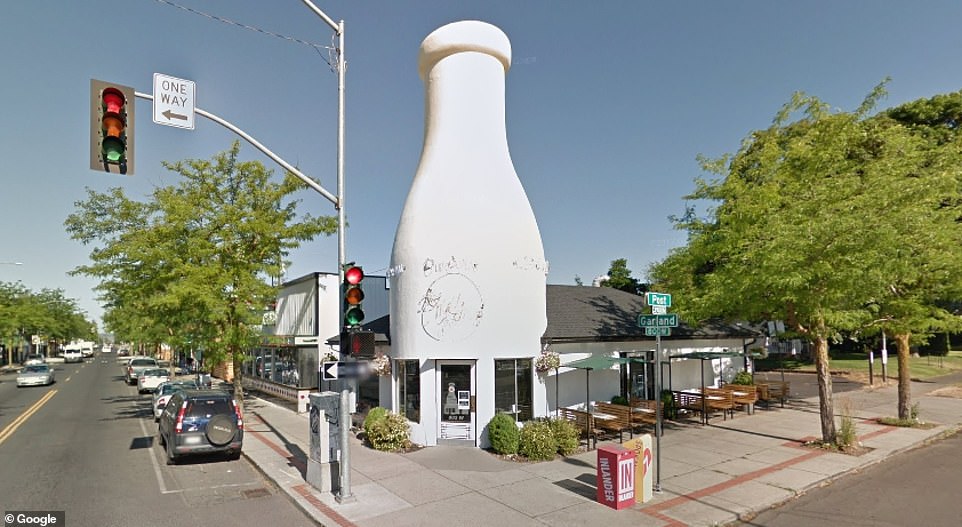 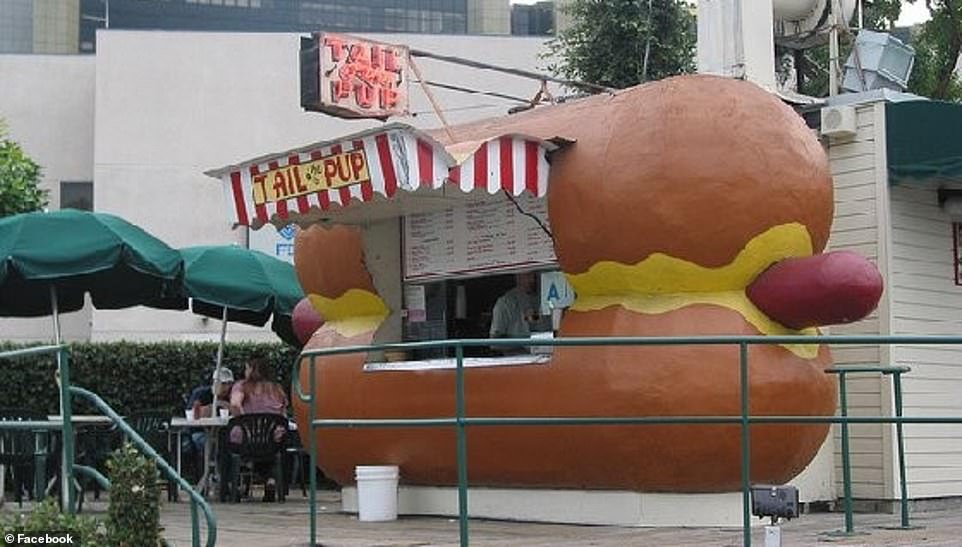 Tail O’ the Pup in Los Angeles, California, was built in 1946 and shaped after a mustard-filled hot dog. The city of Los Angeles has since declared the fast food stand to be a cultural landmark and it is one of the last examples of buildings constructed during the 20th century and modelled after the food it sells 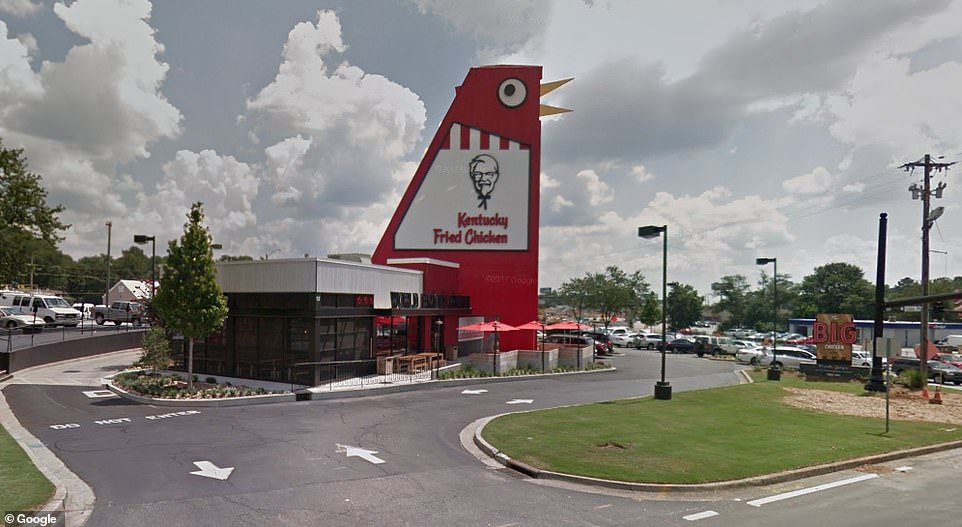 The Big Chicken is a KFC restaurant in Marietta, Georgia, which features a 56-foot-tall steel-sided structure designed in the shape of a chicken. It was constructed in 1956, and rebuilt following storm damage in 1993. It underwent a $2 million renovation project in 2017 and remains a popular roadside restaurant 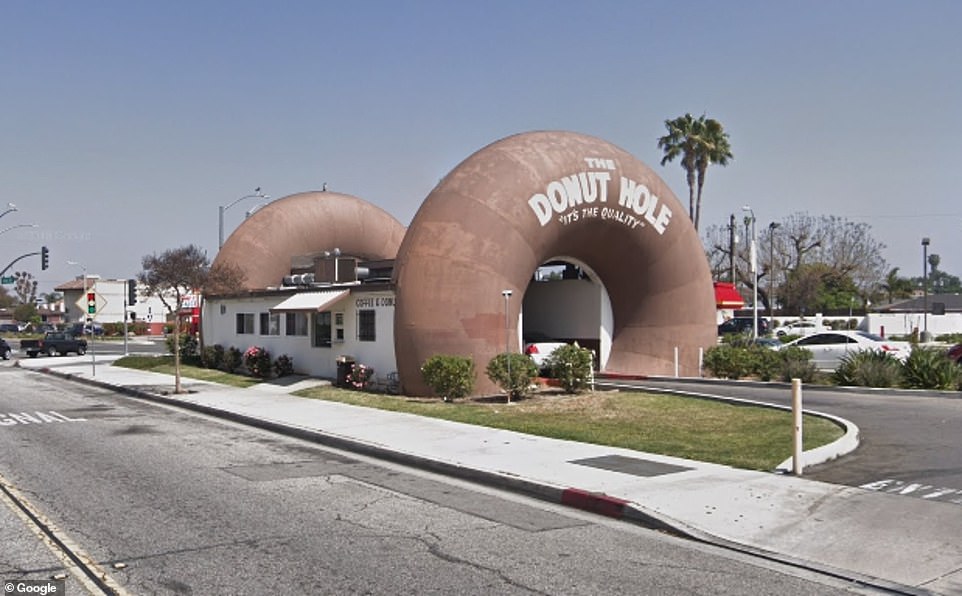 The Donut Hole in La Puente, California, is one of the most photographed donut shops in the U.S. due to its wacky shape. The building – constructed in the 1960s – is shaped like two giant donuts, which are connected by a drive-thru where customers can place their orders 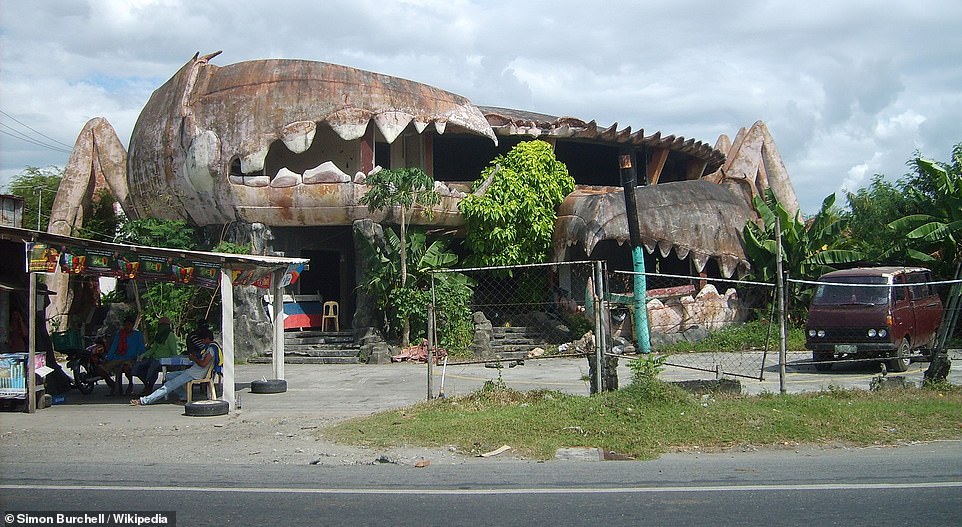 The crab-shaped Alimango Restaurant in Dagupan City, Philippines, started operating in 1981 as a seafood restaurant. It is now closed, with structure slowly rusting, but many locals remember the kooky eatery with fondness

The McDonald’s at Montfort Drive in Dallas was built in the form of the World’s Biggest Happy Meal and it includes giant sculptures of Ronald McDonald, a Big Mac and fries. The Travel Channel deems it as one of the 10 most unique McDonald’s out of 30,000 worldwide. Adding to the wackiness, the interiors boast crystal chandeliers, Ralph Lauren wallpaper and a granite floor 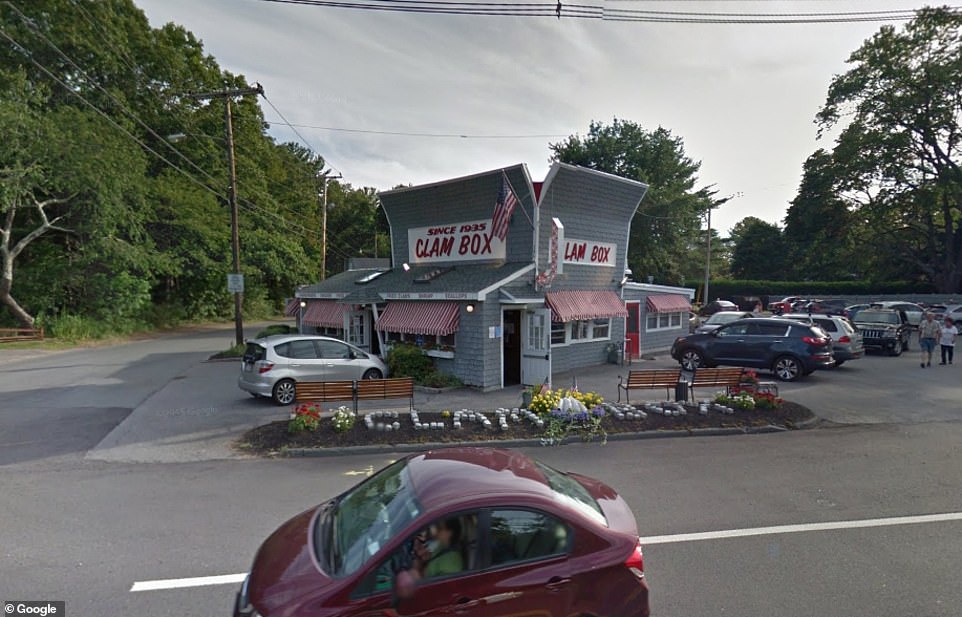 The Clam Box is a landmark restaurant located 30 miles north of Boston in historic Ipswich. Built in 1938 by Mr Dick Greenleaf, the unique structure resembling an open-topped clam box has been featured in numerous magazines and TV shows

The Mammoth Orange is a brightly coloured, dome-shaped restaurant in Arkansas. Despite its fruity appearance, it serves up burgers, fried catfish and soda, not juicy oranges 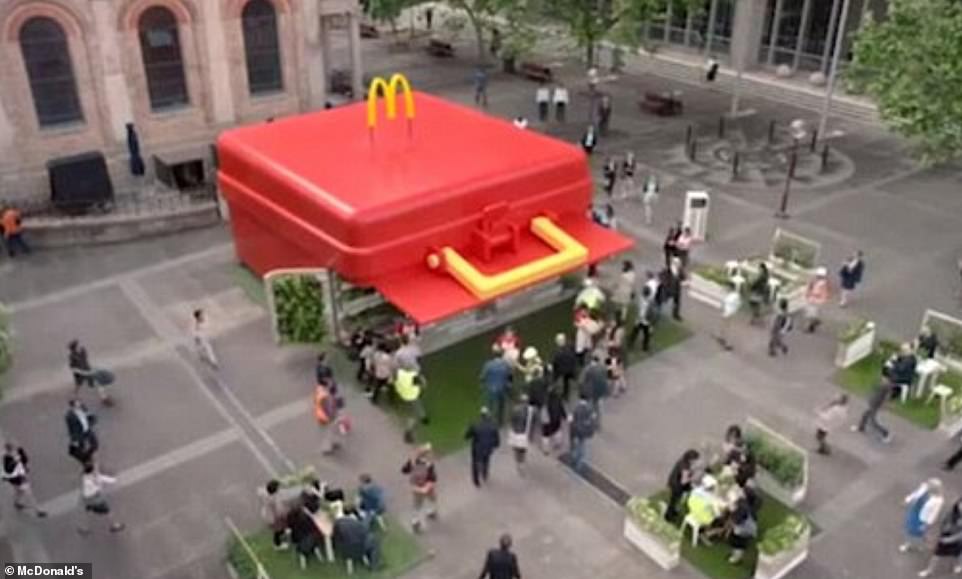 In an effort to get more Aussies interested in fast-food fare, McDonald’s Australia set up a pop-up restaurant in the shape of a gigantic lunchbox in 2014. The massive red and yellow box went on tour to Melbourne, the Gold Coast, Sydney, Adelaide and Perth 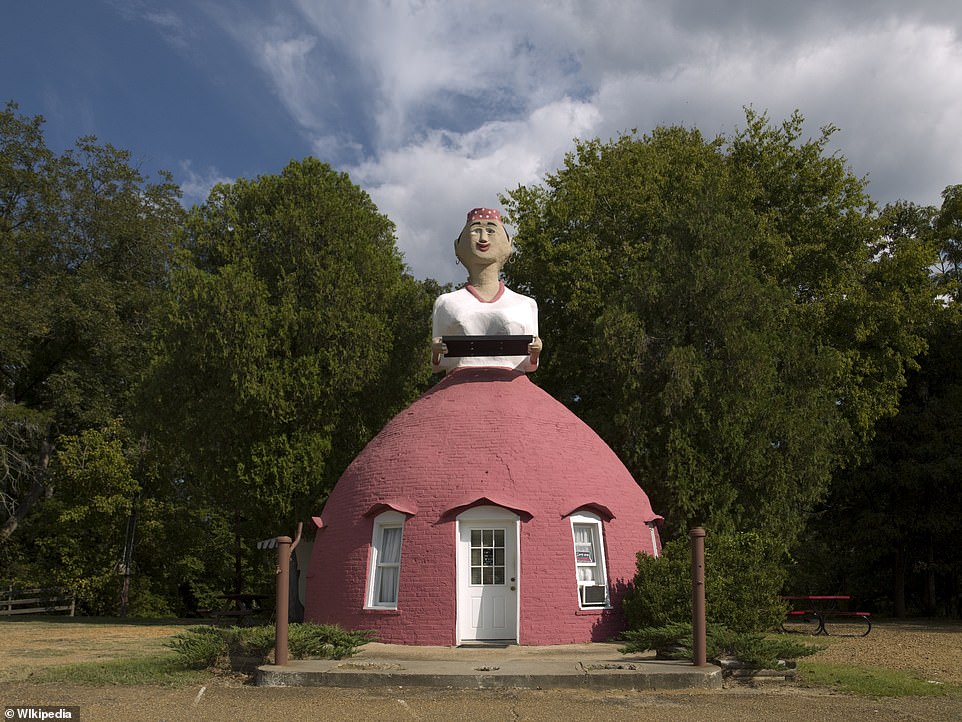 Mammy’s Cupboard is a roadside restaurant in Mississippi built in the shape of a mammy archetype. It was founded in 1940, with the woman’s skirt housing a dining room and a gift shop. Bricks were used to build the domed skirt structure and horseshoes still hang as earrings on the woman. The lady appears smiling, holding a serving tray and the building has undergone several renovations over the years, with the woman’s skin colour also changing