From big surf to big cats: The stunning early submissions in the 2021 Sony World Photography Awards

The Sony World Photography Awards 2021 is open for business.

And the organisers have revealed some of the stunning early submissions.

Now in its 14th year, the Sony World Photography Awards ‘celebrates the best contemporary photography from the past year’ and ‘gives vast exposure and opportunity to photographers worldwide’.

The awards are split into four competitions – one for professionals, an open contest, a student contest and one for youths aged 12 to 19. The winners, which will be announced in April 2021, are selected by a panel of judges led by independent curator Mike Trow.

The images presented here have all been entered into the open contest and include a powerful black-and-white shot of a lion, a foggy scene near Deer Park in Pembrokeshire, Wales, and a breathtaking picture of the Vestrahorn mountain in Iceland.

Scroll down to see some of the early entries – proof that best certainly isn’t being saved until last. 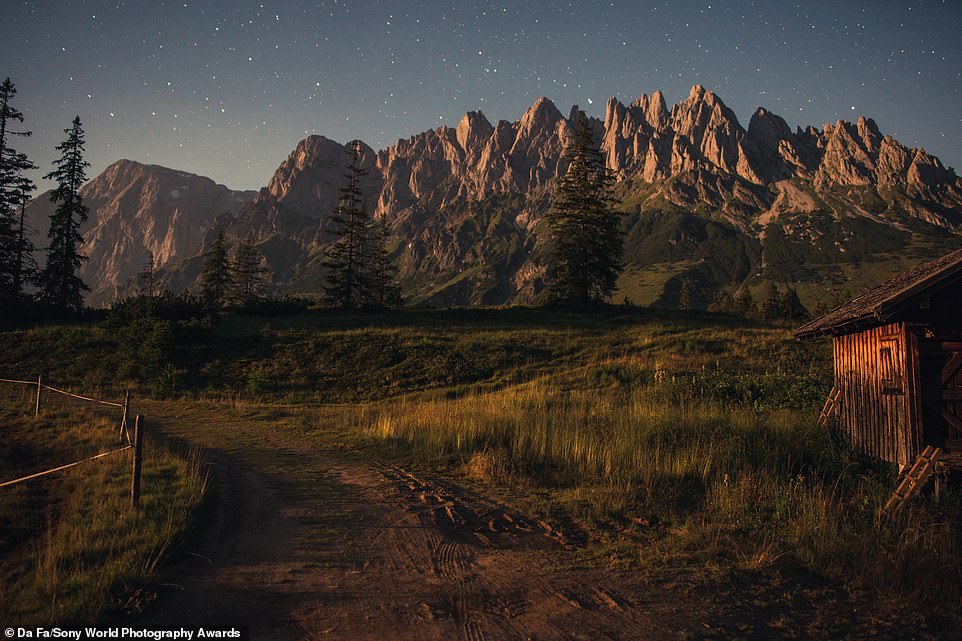 This incredible photo was taken at 2am in the Austrian Alps by Da Fa and shows the beautiful Hochkönig group of mountains, which are 9,514ft (2,900 metres) tall at their highest point. It is an entry in the open competition’s landscape category 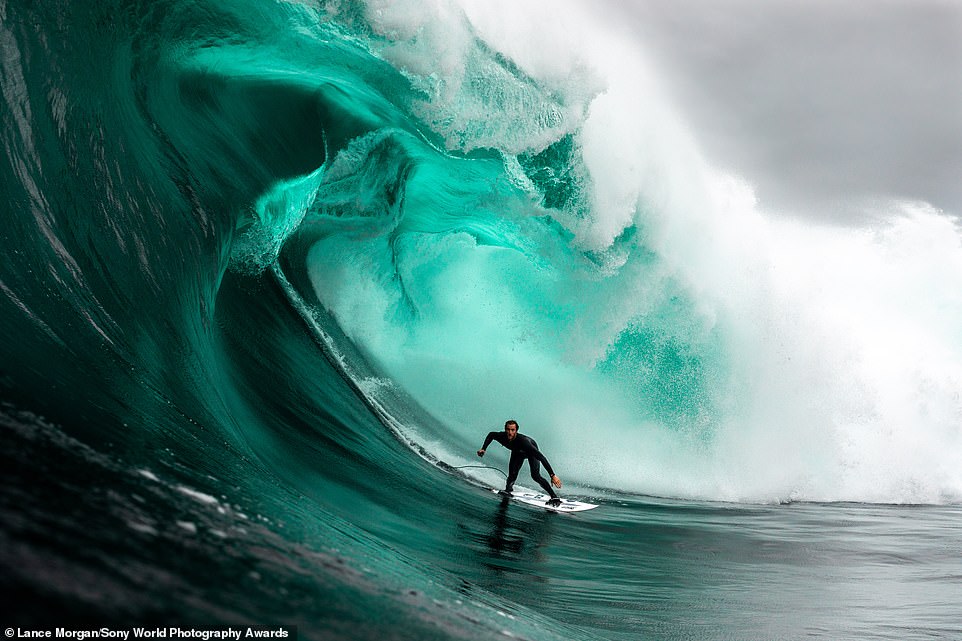 Australian photographer Lance Morgan entered this jaw-dropping image into the lifestyle category. It shows surfer Mikey Brennan riding a wave off Ship Stern Bluff in Tasmania. Photographer Lance says that storms with intense force brew in the Southern Ocean, whipping up gigantic swells in the area 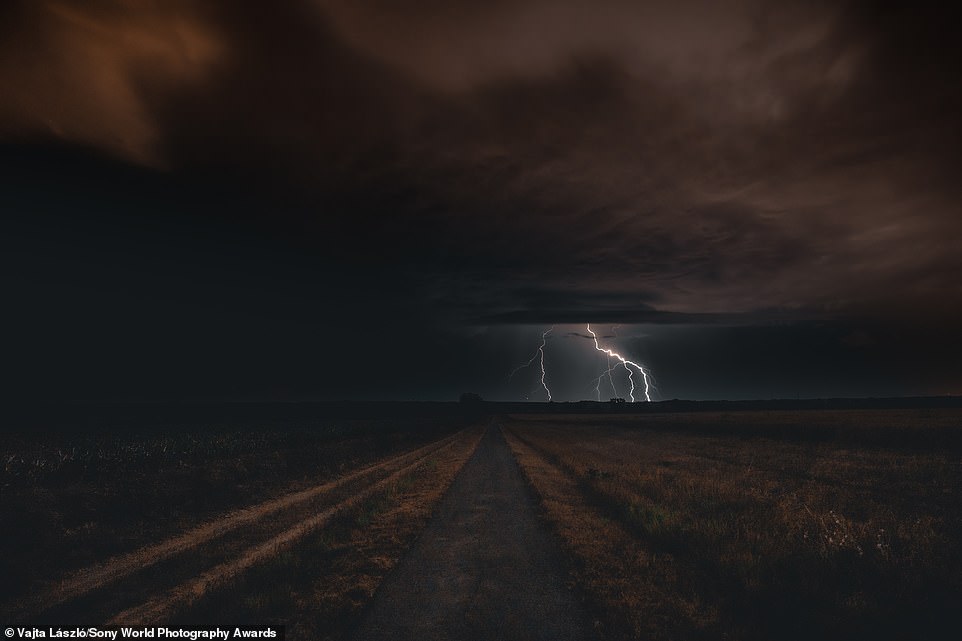 This dramatic image, called Storm in the Field, was snapped by Hungarian photographer Vatja László. It has been entered in the landscape category 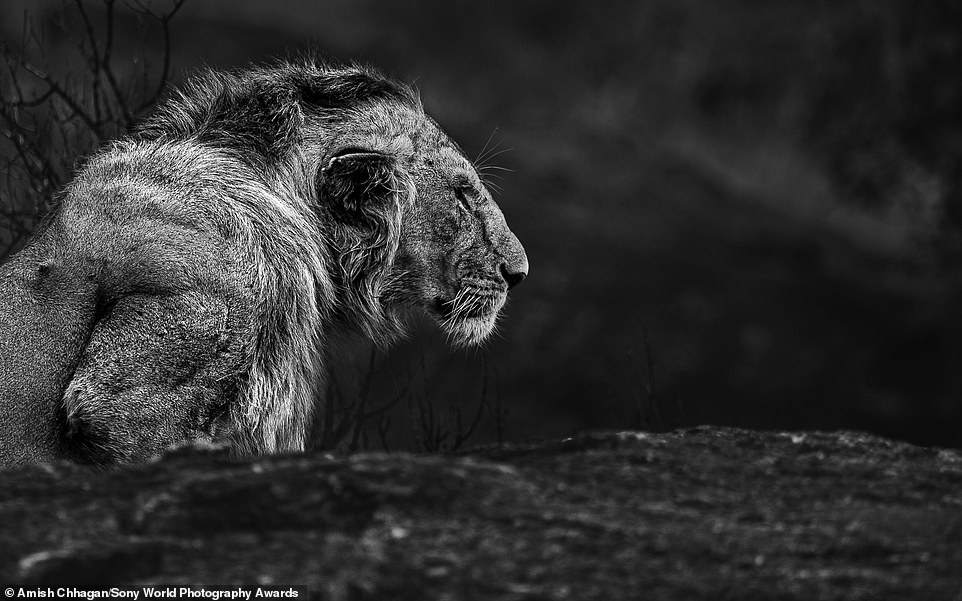 Amish Chhgan is the photographer behind this powerful black-and-white image of a lion, which he has entered into the natural world and wildlife category. Amish said: ‘Lions are symbols of power and strength. This photo clearly depicts this through his intense pose, his magnificent mane and the deliberate tensing of his deltoids (evidently for this photoshoot!)’ 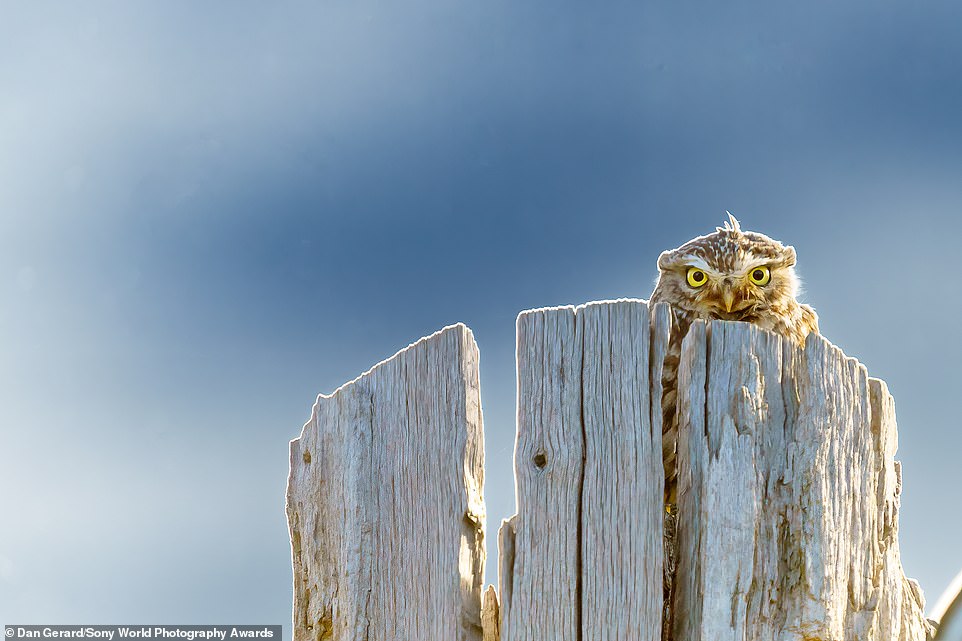 British photographer Dan Gerard was driving to work one morning when he spotted a silhouette that caught his eye on top of a dead tree. When he returned to the spot, he found this owl staring back at him. He explained: ‘I pulled up on the grass verge, and managed to capture the intent glare as our eyes met.’ The image is entered in the natural world and wildlife category

This charming image of a proud male emperor penguin was snapped by British photographer Jack Evans while on patrol with the British army on the island of South Georgia – a British Overseas Territory in the southern Atlantic Ocean. The photo is in the natural world and wildlife category 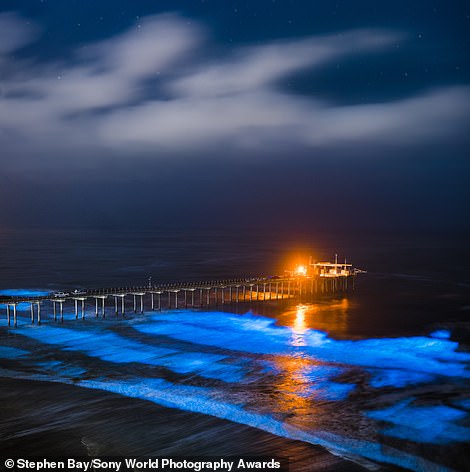 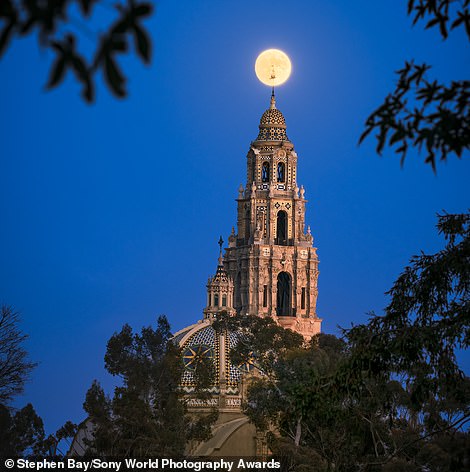 Both of these images are by American photographer Stephen Bay. On the left is a mesmerising photo of a rare bloom of bioluminescent algae illuminating the waves by Scripps Pier in La Jolla, California. It is entered in the landscape category. On the right is a stunning image of a full moon rising over the California Tower in Balboa Park, San Diego, which is entered in the architecture category 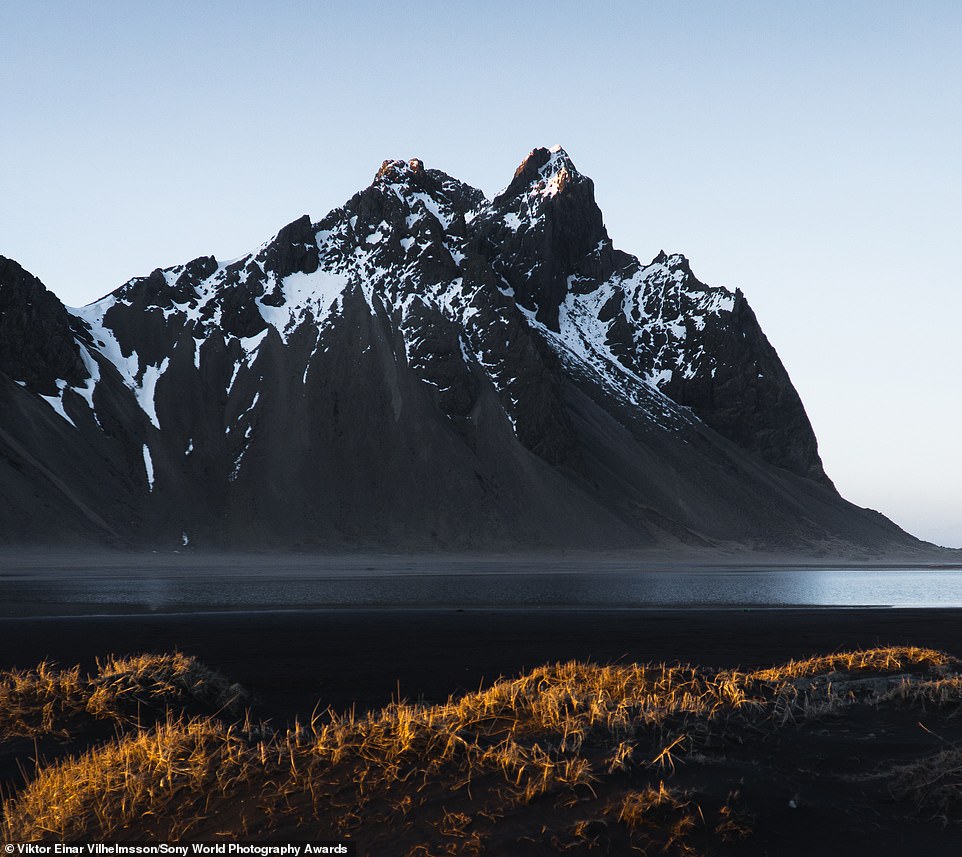 Viktor Einar Vilhelmsson has entered this epic image of Iceland’s Vestrahorn mountain in the landscape category. The Icelandic photographer described Vestrahorn as a ‘beautiful mountain that is just by the sea’ 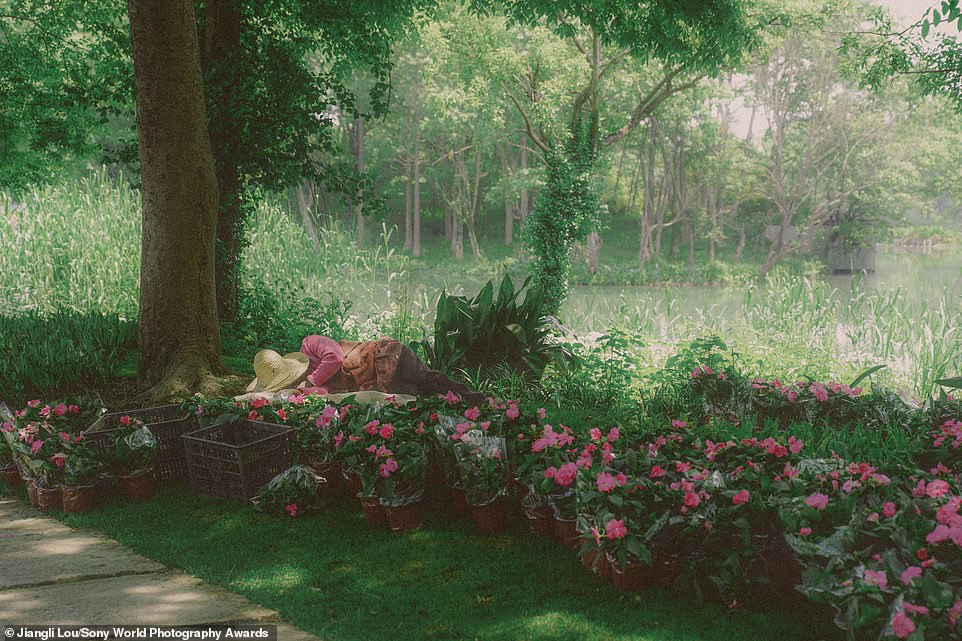 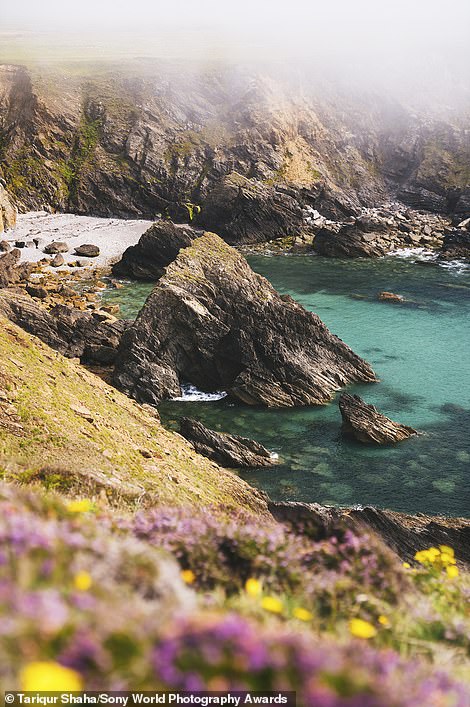 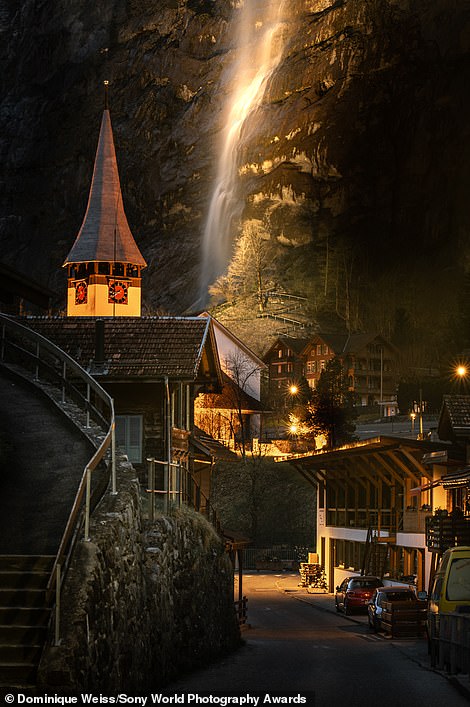 On the left is a beautiful image by photographer Tariqur Shaha. It shows rolling fog lifting to reveal the stunning cliffs near Deer Park in Pembrokeshire, Wales. It is entered in the landscape category. On the right is a stunning image by Dominique Weiss that she took in the Swiss Alps during lockdown. She says it shows the ‘oppressiveness, gloominess and uncertainty that affected life’. However, she adds that the photo also shows ‘elements of hope that represent light at the end of the tunnel’. It is an entry in the landscape category 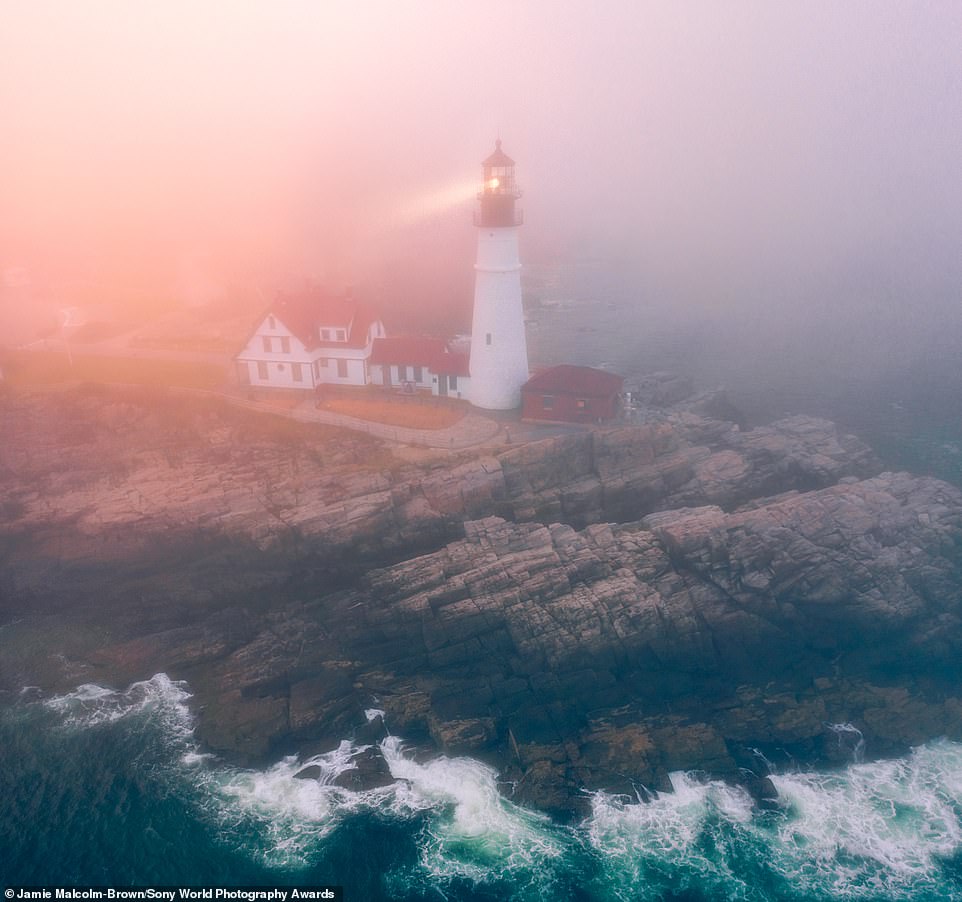 American photographer Jamie Malcolm-Brown is behind this shot of Portland Head Lighthouse in Maine and said: ‘The thick fog had a burst of colour come through as the last bit of sun set in the west. It only lasted a few moments but created a unique view of the often-photographed lighthouse.’ It is an entry in the landscape category 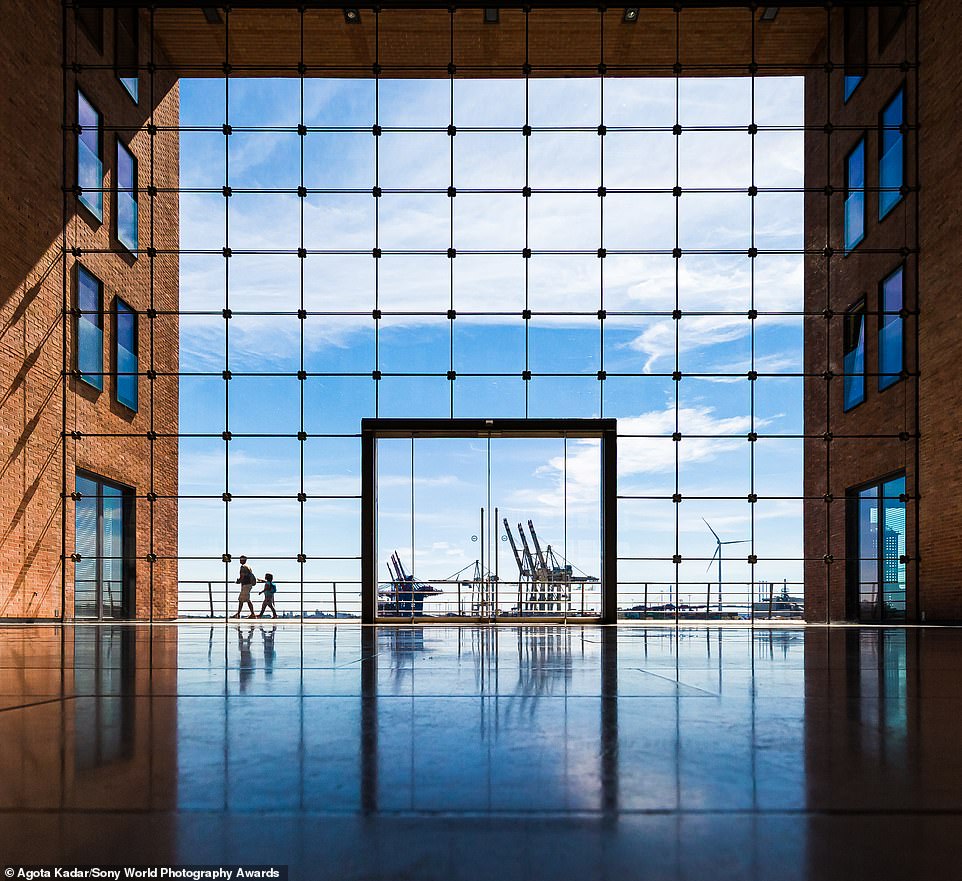 This incredible photo was snapped by Romanian photographer Agota Kadar and shows the view towards cranes at Hamburg’s cargo terminal from a former vintage docklands building revitalized and today used for offices. It is an entry in the architecture category 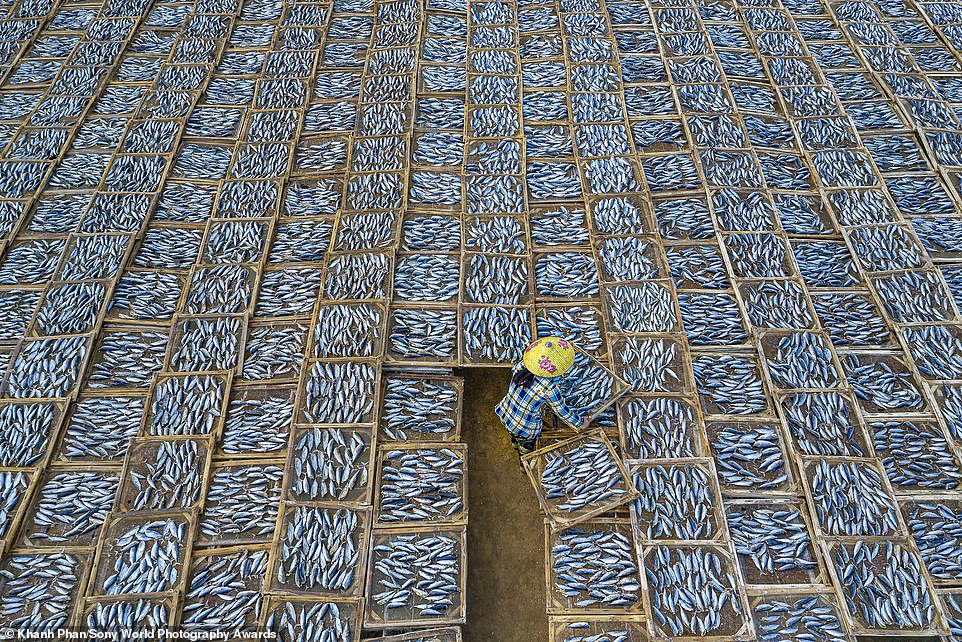 A mesmerising aerial shot of a woman drying fish at Long Hai fish market in Vietnam snapped by Khanh Phan. It is an entry in the travel category