Tenerife is famous for its sun, sea and sangria. It’s also famous — for those who know it — for being an island of two halves. The south, a land of sizzling sunshine; the north, filled with rainforest and bananas and with a reputation for not much else.

My wife and I decided to visit both to see if this is true — mainly because she is a fan of sun and sea, and I’m a big fan of bananas.

In the south-west, we stayed at the Hotel Jardines De Nivaria, next to the beach of Playa Fanabe. Driving up to it in our hired car, we thought it was far too posh. 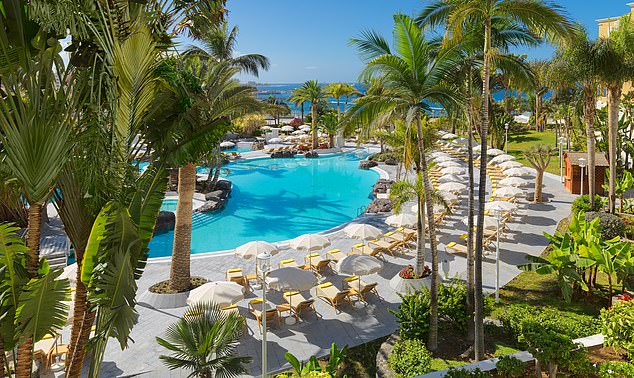 The whole package: One of the swimming pools at the Hotel Jardines De Nivaria

When I asked the receptionist where to park, he took the car keys, rang a bell and told me they would take care of it. Which set the standard for the whole of our stay.

The hotel had everything my wife could ever want from a sunny seaside holiday. Our suite was larger than the ground floor of our house, with views out across the waves.

There were two pools, one heated. Mrs Cullimore dipped a toe in both and then announced she’d be going in the water every day. In the heated pool, obviously.

We could have spent the entire week like this. Lounging, eating at the hotel restaurants and lounging some more.

But we wanted to explore. So, one morning, we slipped through a discreet gate on to the beach and set off along a smooth path that skirted the coastline.

We soon found ourselves in the friendly town of Los Cristianos. Walking away from the beachfront tourist bars, we discovered quiet, chic streets, pavement cafes and a bustling little harbour. Seems there is more to the south than hotels and pools.

The next day, we drove off, heading east along the southern coast. Finding several pretty villages within easy reach, we stopped off for lunch at La Tejita, a kite surfers’ playground, with Montana Roja (the red mountain) rising above the bay. Later in the week, local guide Ancor and I drove north, leaving my wife in the south by the pool. According to Ancor, geography has always divided Tenerife.

Years ago, the south was a dry, hot land without much water. The north was the place to be. The volcanic soil allowed crops to grow and, importantly, there was rain. 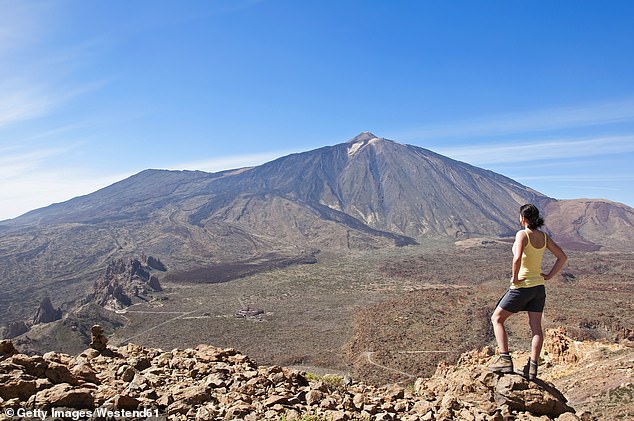 Hiking in Teide National Park, which has the tallest volcano outside Hawaii

But then someone found underground water in the south. Pretty soon, the price of land went up and package holidays took off.

Which explains why the north is where you need to go if you want old market squares full of locals — although some tourists are now beginning to clock this and a few boutique hotels have opened.

The road north took us through pine forests, across miles of broken lava, before bringing us to the foot of El Teide, the tallest volcano outside Hawaii. This part of the island is so otherworldly that NASA uses it to test robots destined for Mars.

Later, we found ourselves high on a cliff, as Ancor tried to point out the small town of Garachico far below us, where he swims in man- made sea pools. Trouble was, it was half-hidden by a blanket of white. Locals call this fluffy phenomenon ‘the sea of clouds’.

La Laguna used to be a lagoon, hence the name. When it dried up, the Spanish built their capital in the remains. It was the first planned peace town — built in 1510 with no defensive walls. It was such a success the pattern was copied elsewhere, which is probably why it reminded me of Havana.

We strolled around old houses with calm courtyards and stared up at the cathedral, with Canarian dragon trees outside. With few tourists around, watch out for siesta opening hours.

After lunch, we set off for the nearby rainforest of Anaga Park, where I found myself surrounded by cool, green shade and being serenaded by a flock of Tenerife goldcrest birds.

Driving back to our hotel took only an hour. Ancor told me his truck-driving grandad used to take all day to make this journey before the new road was built. This made me realise: you don’t have to choose sides any more. North or south — it’s all good.

Which explains why we had booked a return visit before we even got on the plane home. Though we’re still not sure where to stay. Should we sizzle in the south, or siesta in the north?