Don’t be put off by the looming doorway, with its spray-painted graffiti tags and crumbling posters, just off hectic Namesti Republiky, one of the busiest squares in Prague. Beyond it, a quieter world unfolds, with courtyards, galleries, a cozy cafe and bar.

Campus Hybernska, as this sprawling complex is known, is one of several new cultural venues that are springing up in Prague’s many long-abandoned buildings.

“The front building was built between the 18th and the 19th centuries, and the whole thing was once some sort of downtown seat of a Czech noble family,” said Jan Bicovsky, a professor at Prague’s Charles University and a director of Campus Hybernska. “A ‘palace’ is probably the right expression.”

Abandoned factories and palatial structures, former military barracks and old electrical substations: Unlike Berlin’s art collectives and Budapest’s party-friendly “ruin bars,” the city’s post-1989 cultural life rarely included the use of these kinds of buildings, which have mostly remained empty, often for decades, because of local ownership laws and usage regulations.

But in recent years, they have become home to grass-roots arts and entertainment spaces, whether they are in the city center or up-and-coming neighborhoods. You won’t find them in mainstream travel guides; they are decidedly off-the-radar venues, providing insider access to alternative cultural activities and a chance to see interesting, historic spaces.

And for those who have an aversion to Prague’s famous tourist crowds, you won’t find them in these places. Instead, you’ll find a quieter, more local side of Prague’s vibrant cultural life. 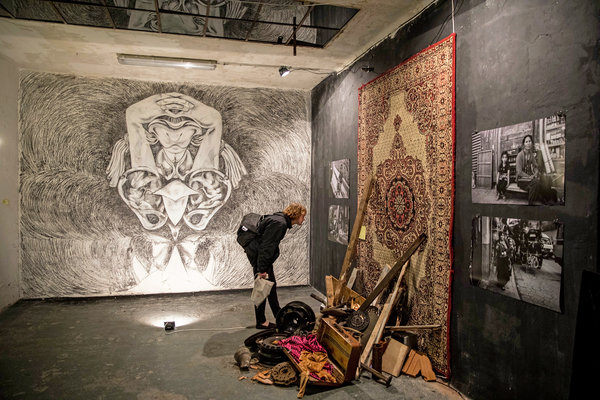 ‘A space for things to happen’

Furnished with a hand-me-down stage for its bar and performance venue, and 90 seats purchased for a single Czech koruna (about four cents) for its lecture hall, Campus Hybernska is just getting started. “We’re trying to build something, a space for things to happen,” Mr. Bicovsky said, noting that at one point, the place “became the property of the Ministry of Interior, so actually the secret police and other organizations were here.”

Most of the complex still appears as it did when it was under state control. A furnace and central heating were installed earlier this year. Yet, despite its newness, Campus Hybernska maintains a busy event schedule including, recently, a kimchi festival, a multi-media exhibition called “Other People Think,” which features 34 international artists, as well as concerts of funk, blues, Greek rebetiko and other musical styles, which will be held throughout the winter.

Art in an old Praga factory

Other projects have taken longer to develop. A few miles east of the city center, the old Pragovka automobile factory in the outlying Vysocany district has stood more or less empty for decades. Starting in 1907, the stylish Praga automobiles built here turned heads until just before the Communist takeover in 1948. After that the factory built trucks, military vehicles and automobile parts until 1989, when it was privatized and eventually shuttered.

Although the first artists started moving in about seven years ago, it is only recently that its two main art galleries, featuring both local and emerging European artists, have opened, along with a new cafe.

“It’s got a melancholy air, to be sure,” said Lawrence Wells, an expat American artist who was among the first to start renting a studio here in 2011.

A five-minute walk from the Kolbenova metro station, the main, E-shaped building now hosts more than 120 artists, designers, filmmakers and other creative types. Studios still bear signs identifying chemical laboratories and warnings about the dangers of smoking around flammable gasses. Above a run-down loading dock, a bone-white sculpture of an immense male nude reclines.

In warmer months and at special events during the winter, an outdoor beer garden serves Czech craft brews. Old Pragovka trucks, painted white, ghost the parking lot, while billboards on the eastern edge of the property feature work from resident artists, including the former street and graffiti artist known as Pasta Oner.

“Working here is fantastic,” said Ladislav Vlna, a Czech artist who made headlines for his use of a blowtorch and power tools to “paint” large-scale portraits on metal sheets. “It’s warm, there’s plenty of room, and we have a lovely cafe. And if you use a very noisy tool to make art, there’s no problem, because no one actually lives here.”

Halfway across town, another creative space has opened in an old military barracks near the western edge of the trendy Karlin district.

“This used to be a changing room,” said Matej Velek, the director of the project, gesturing around a stylish cafe near the empty pool, which now serves as a performing arts space. Original changing-room tiles don’t look out of place in the minimalist cafe, which serves, among other things, Czech lager, French wine and coffee drinks.

The cafe is part of Kasarna Karlin, a new project that is making temporary use of the barracks. In this case, “temporary” probably means between five and 10 years, while the building’s owner decides what to do with it.

Originally built in 1848, the block-length barracks was floated for possible privatization in 2013, while it was still the property of the Czech government, a fate that has befallen many Prague buildings that were once considered public property. Instead, it was transferred from the Ministry of Defense to the Ministry of Justice, who then worked with the local city government to find a suitable tenant.

“This is a cultural heritage site,” Mr. Velek said. “It can’t be demolished. It can only be reconstructed to its original state. ”

The old barracks are massive; Mr. Velek and his partners only have the use of one wing of the D-shaped building, as well as the large courtyard that it surrounds. Events take place inside and out, year-round. In winter, the beach volleyball court turns into a public ice-skating rink. The movie theater upstairs is also home to break-dancing classes. The complex includes a contemporary art gallery, a bar and a music venue, called Garaze.

“We have an indoor cinema, and we have an outdoor cinema in the summer,” Mr. Velek said. “The old swimming pool is an experimental place that works for author readings and some performances.”

He is most proud, he said, of the five large-scale sculptures displayed in the courtyard — three by the artist Frantisek Skala and two from the sculptor and filmmaker Cestmir Suska — as well as the amount of open space Kasarna Karlin contains: about 2.47 acres.

It would be difficult to find quite so much room in the crowded maze of Old Town. But even there, a new creative development is shaping up inside the building known as the House at the Golden Horn, just off Old Town Square. On the same block as the recently restored astronomical clock, a formerly vacant five-story building, mostly dating from the Renaissance era, now houses nonprofits and start-ups.

The charitable organizations inside the House at the Golden Horn might not hold too much interest for tourists. But the Scout Institute here hosts poetry readings, concerts and other cultural events every week, including some in English, and the cafe on the second floor is one of the least commercial places to stop for a cup of coffee in the heart of Prague’s hyper-commercialized tourist zone. Just by sticking your head in you’ll get a glimpse of a Prague Renaissance building.

With dozens of vacant buildings across the Czech capital, the trend is set to continue in coming years, with activist groups like Prazdne Domy regularly promoting available spaces. More are already on the way. Near the Florenc metro station, not far from Kasarna Karlin, locals started renovating a vacant building called Bar/ak this past summer, recently installing a pottery studio, bar, cafe and community grilling area. And just a short walk downhill from Prague Castle toward the Vltava River, a local charitable foundation has announced plans to transform a former electrical substation from 1932 into a new art gallery called Kunsthalle.