TEMPERATURE checks on entry, everyone in face masks, social distancing markers all over the walkways and virtual queuing – welcome to the ‘new normal’ for our world-famous theme parks.

The first of Orlando’s big-name resorts, Universal Orlando, re-opened to the public this week after almost three months in the COVID19-enforced dark. 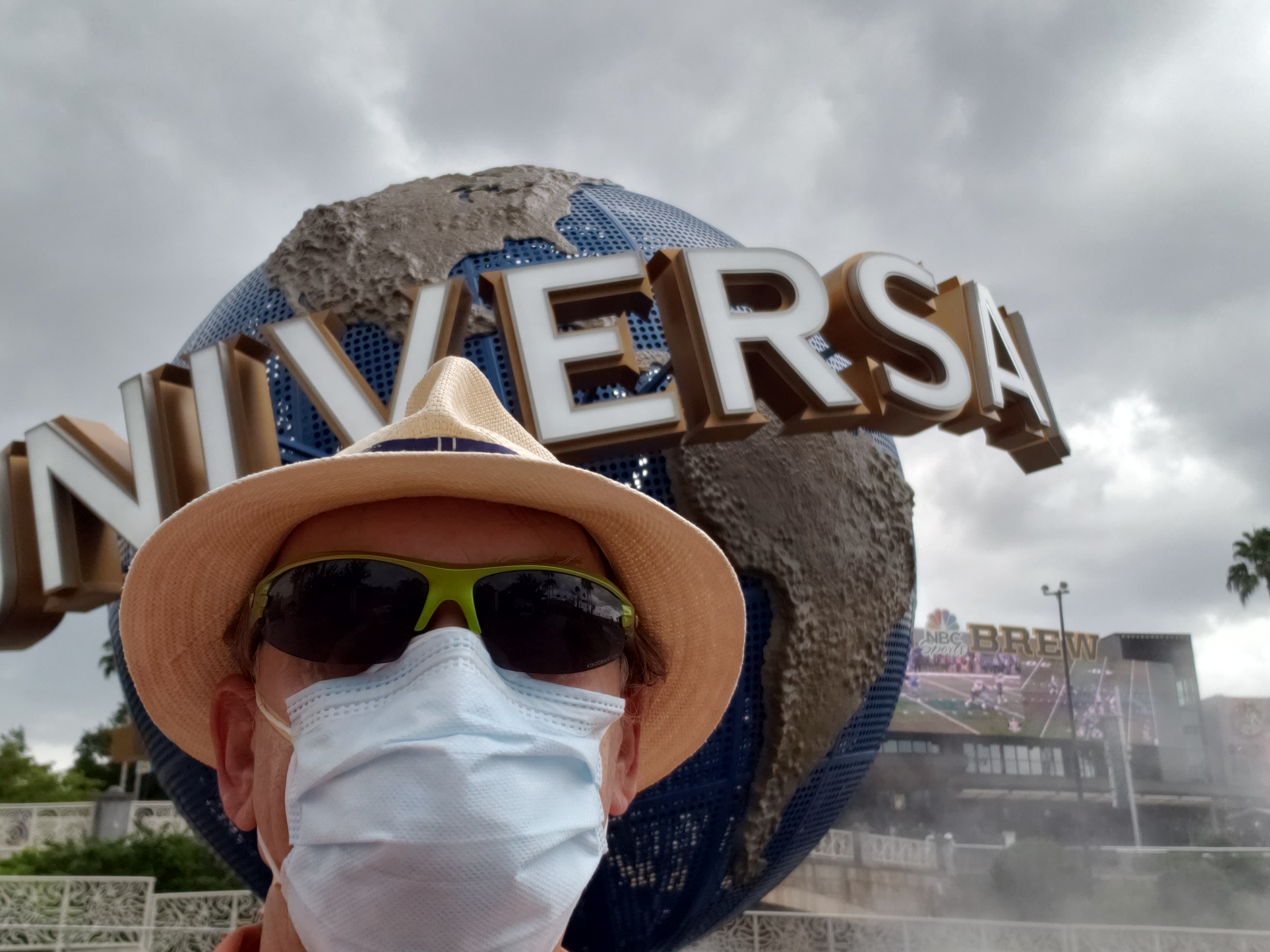 I was among the first paying guests to experience what it’s like to be back in the world of Harry Potter and Co.

As a Florida theme park expert of more than 25 years standing, I’ve seen just about everything there is to see for the past three decades. And then came coronavirus.

From the moment I booked my stay at Universal’s Surfside Inn & Suites – with the telephone agent telling me, “Make sure you bring a face mask!” – this was unlike anything I’ve witnessed in the Sunshine State, including the aftermath of September 11 and the four damaging hurricanes of 2004.

Just to start with, there was an obligatory temperature check when I arrived at the hotel.

Once equipped with a wristband, I was able to take the hotel shuttle bus to the Universal hub and bypass the much longer queues for screening from the main car park. 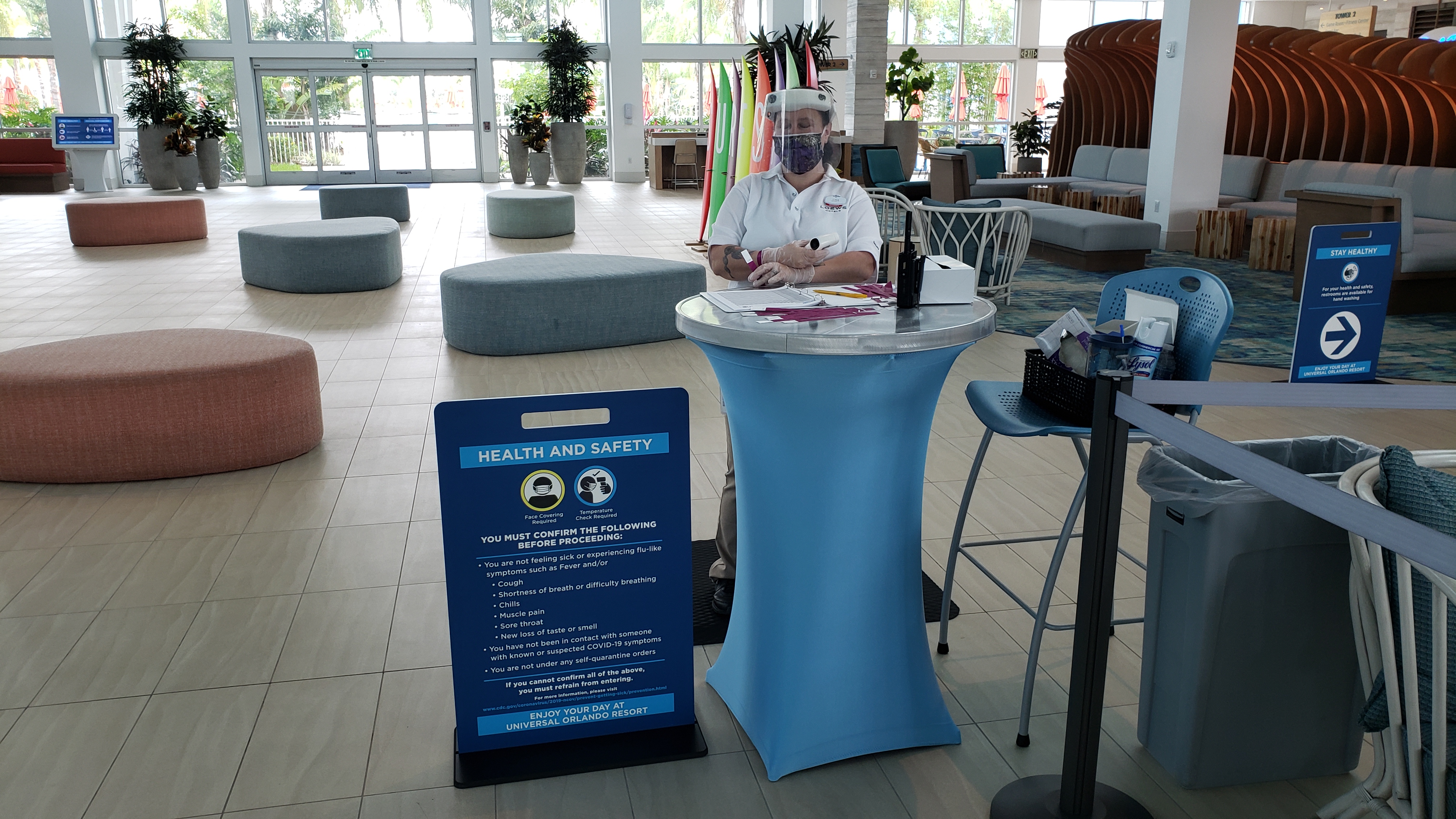 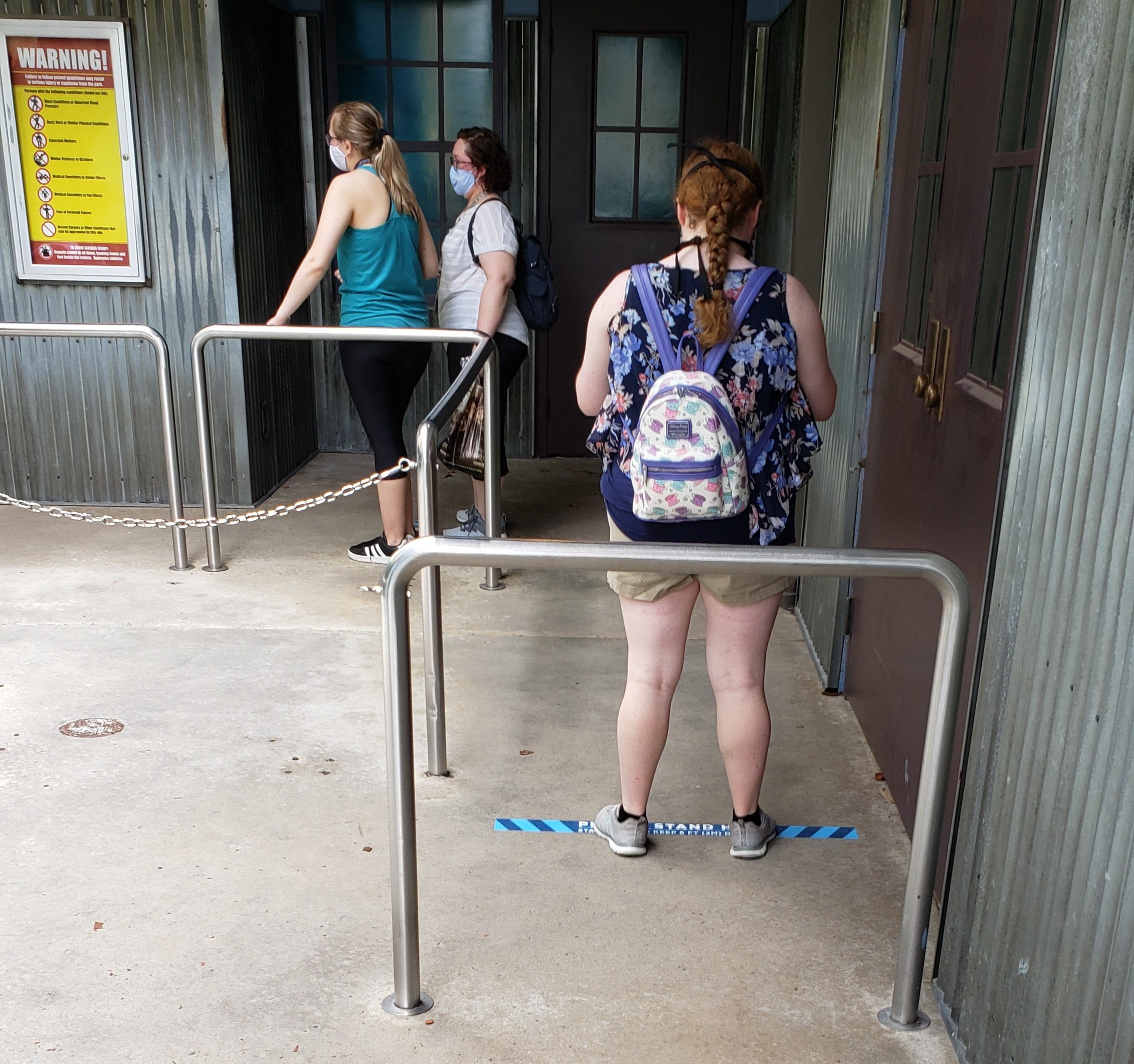 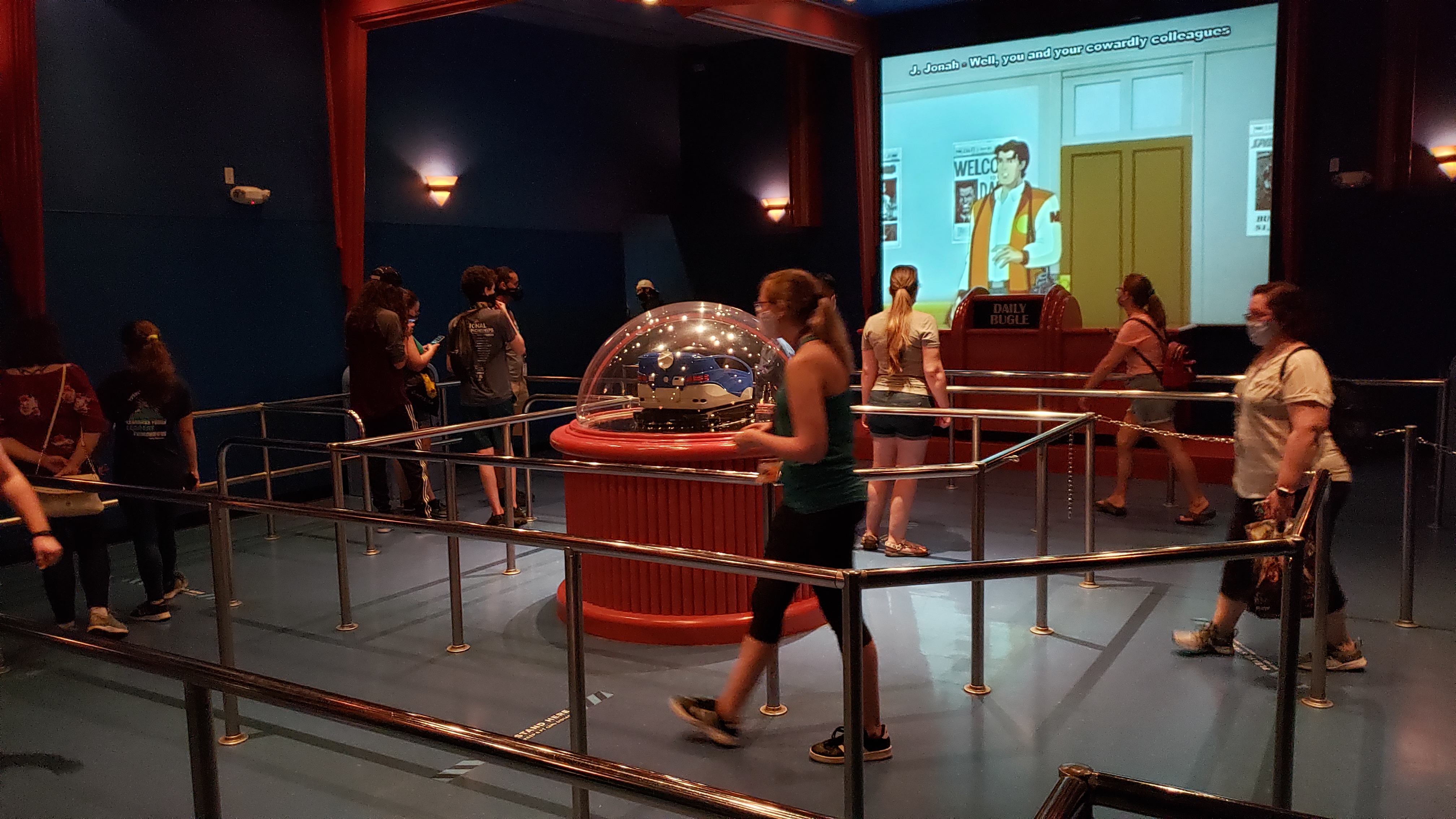 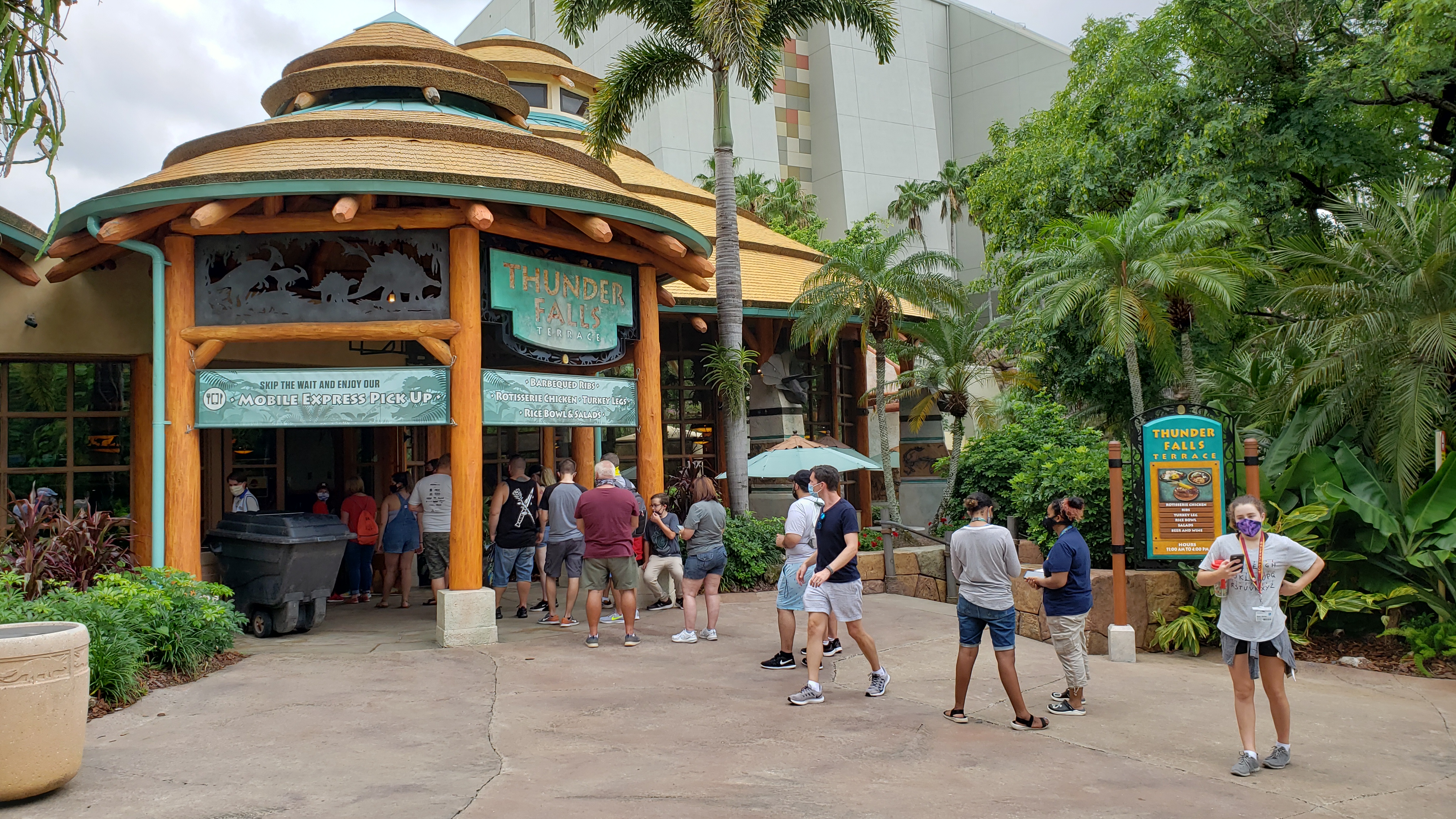 Inside the first of the two theme parks, there were copious warnings about maintaining my social distance at all times, and the pavement was positively awash with newly-painted markers highlighting that all-important 6ft void.

It just needed the typical Underground mantra of “Mind the gap!” to complete the picture.

Most attractions were open again, but several water rides and the kids’ playgrounds remained shut down, testament to an abundance of caution over germ-spreading.

The signage was taking no chances, either. “Guests should evaluate their risk in determining whether to attend,” read the main noticeboard at the entrance. “We cannot guarantee that you will not be exposed to COVID-19 during your visit.”

The next thing that struck me was that the typical June crowds were being carefully managed.

Normally, the queue for popular rides like The Hulk Coaster and the Amazing Adventures of Spider-Man would be pushing an hour. Today, they were barely 15 minutes. 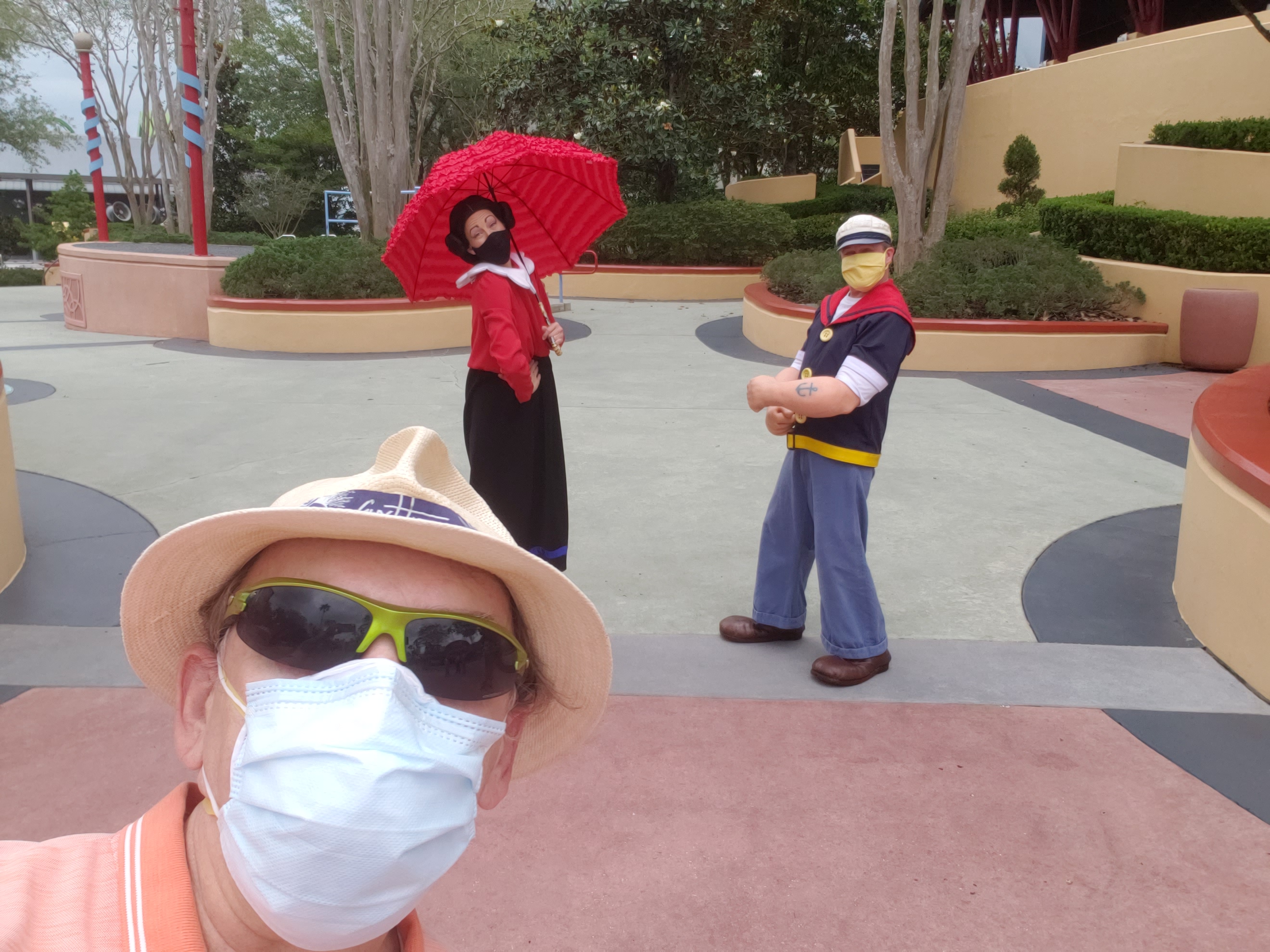 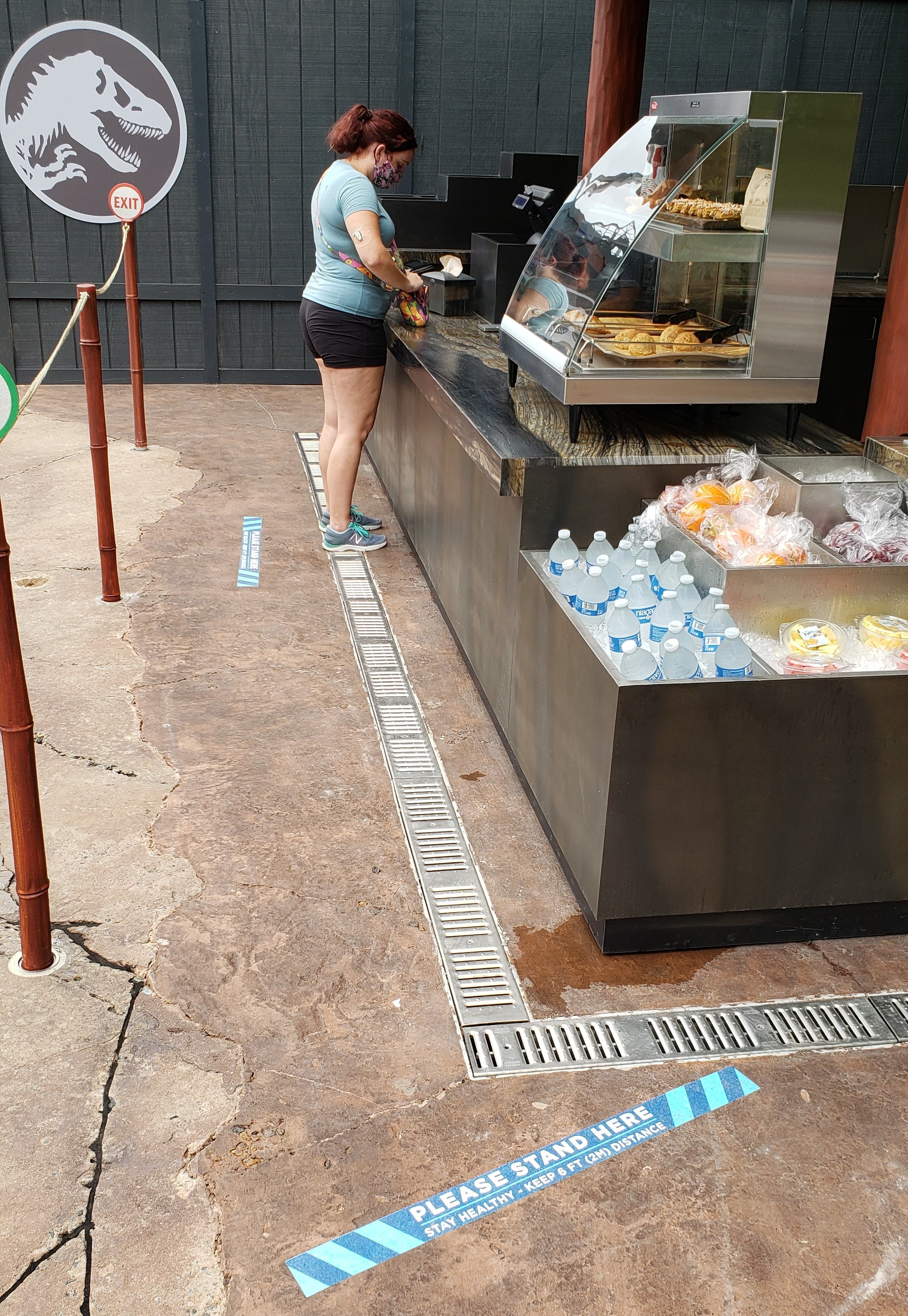 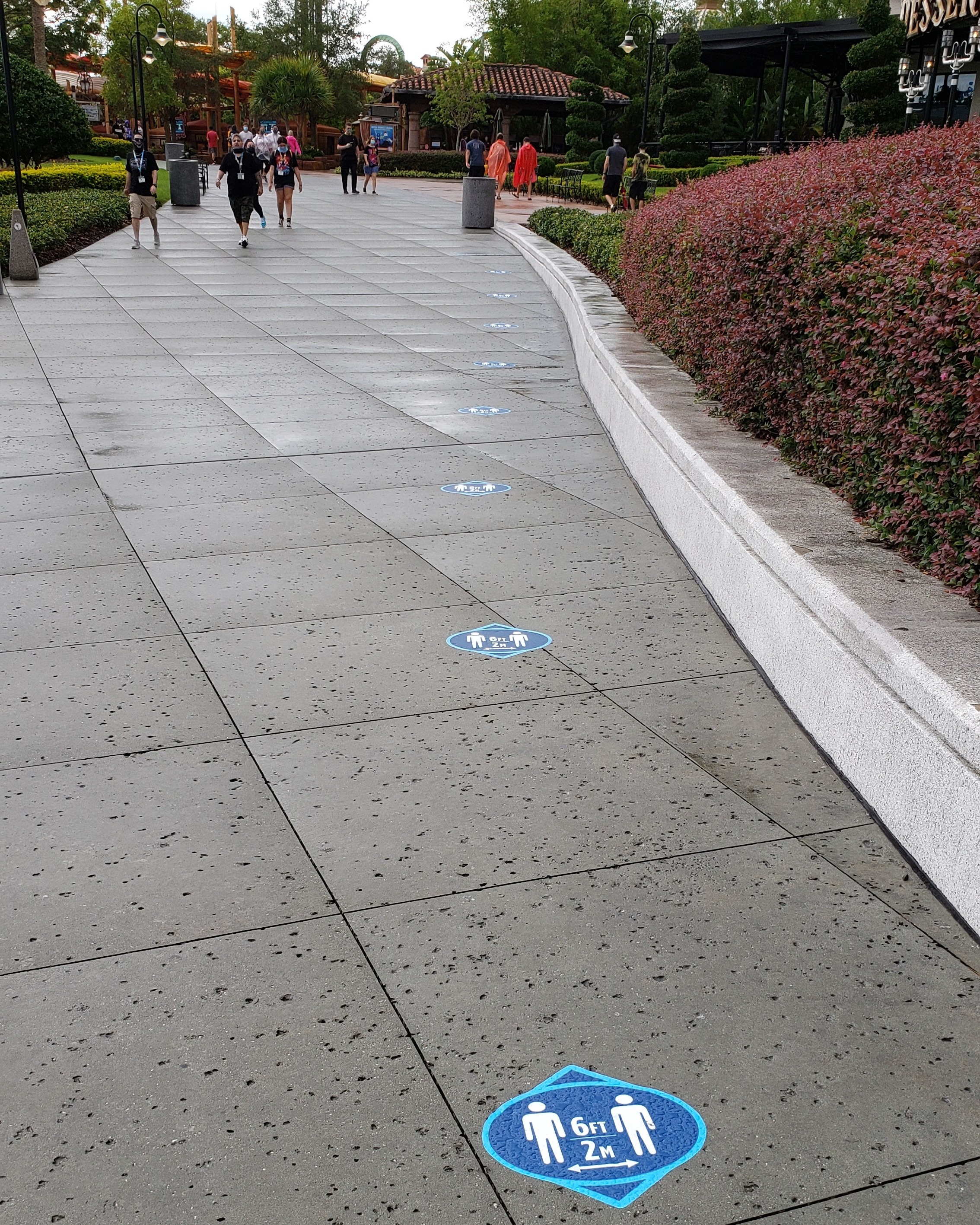 And that’s the key to this brave new world of Universal fun in the sun (plus SeaWorld and Busch Gardens, when they open on June 11, and Walt Disney World next month) – greatly reduced capacity.

While no-one in management would admit to the actual turnstile limits – chief administrative officer John Sprouls would say only that, “We’re going to ramp up very slowly” – it was clear the attendance was only around 35 per cent of the usual at most.

But that lack of real, honest-to-goodness crowds was refreshingly startling and, in the short term at least, the ‘new normal’ for our parks looks like being one of curious idiosyncrasy, almost a strange freedom, if you like.

Yes, it was hot inside the face-mask. It’s June, so that means temperatures in excess of 30C in Florida – it typically doesn’t cool down again until October – with the humidity to match, and I certainly felt every bit of it. But I also felt reassured that my Personal Protection Equipment was doing its job and keeping any stray virus particles at bay.

Think of it like a mini-sauna for your face.

I was able to grab lunch at a table to myself out in the open at the Today Café – the only time my mask wasn’t firmly attached – and I could see my fellow diners being equally circumspect.

There were the (very) occasional PPE-dodgers who thought they could let their masks slip once inside, but they were soon approached by a Universal team member and reminded of their civic duty to cover up.

In one instance, I noticed the team member point in the direction of the park exit, and that was enough to ensure the two miscreants were fully masked again before being able to head for their ride on Men In Black.

As I transferred from the Universal Studios park to Islands of Adventure, making my way past several newly-installed hand-sanitising stations, I was able to take advantage of the vastly increased examples of touchless technology, using the QR code on my mobile phone to gain entry, order a welcome pint at the Café 4 in Marvel Super-Hero Island – and pay for it using Google Pay. 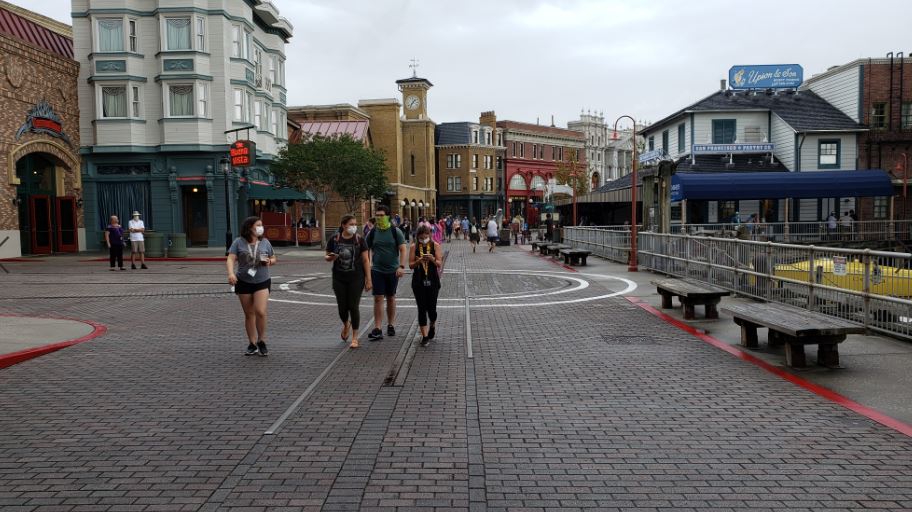 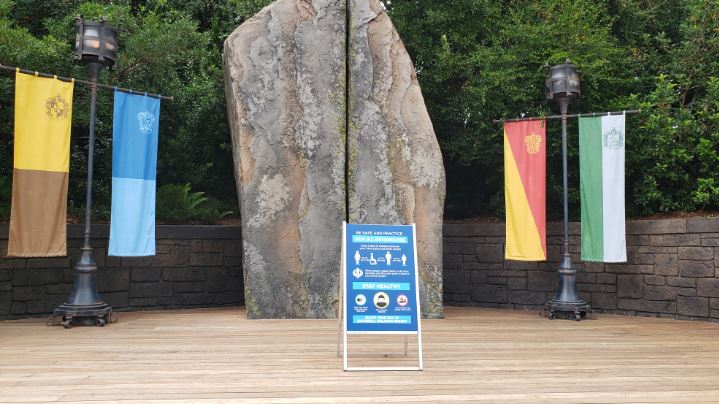 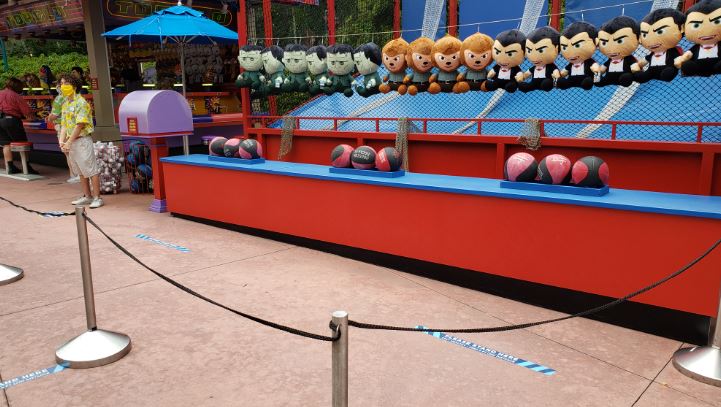 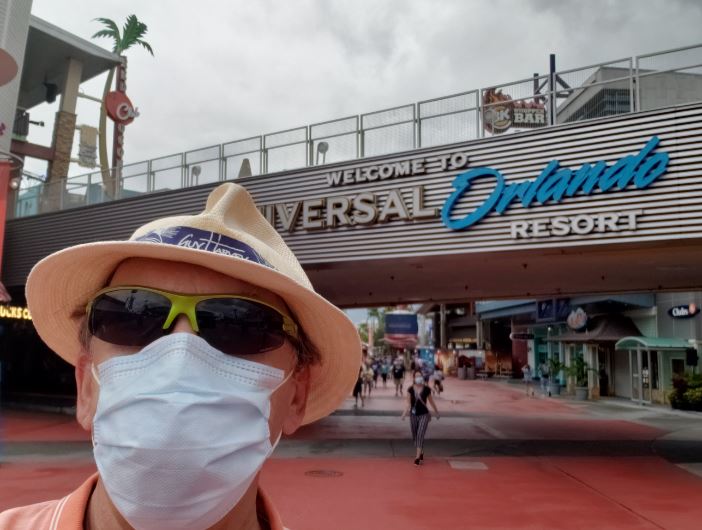 I didn’t have to touch a menu, let alone risk cross-contamination from any grubby-fingered individuals who had ignored the many notices to wash, wash and wash again.

Shops and restaurants still – grudgingly – accepted cash from behind clear plastic screens, but I never actually needed to reach for my wallet at any stage. This, in fact, was the great Cashless Society sociologists have been predicting since the early 1990s, and us germophobes were immensely grateful for it.

There was also a strange new ritual before every ride, from the Caro-Seuss-el to Hagrid’s Magical Creatures Motorbike Adventure. Hand sanitiser – LOTS of hand sanitiser.

I was directed towards it beforehand and given a generous dollop on boarding. The only surprise was that King Kong didn’t show up with buckets of the stuff during the ride.

Then, as we dutifully filed away after every ride, team members sprang into action with sprays and wipes to ensure the vehicle itself was disinfected for the next passengers. My hands have probably never been so clean.

And, while most rides used those distinctly old-tech (but newly-painted) markers on the floor to indicate the required virus-safe distance between each group in the queue, there was also increased use of Universal’s ‘virtual’ queuing system whereby I checked in at an attraction using the Universal App and was given a time to return with only a minimal wait.

With far fewer guests in the queue, it made for a much more low-key and, frankly, enjoyable time in this high-tech, high-energy world. The real trick is going to be in maintaining this level of efficiency as they do, in their words, ramp things up.

In the final analysis, this was not a theme park experience I would recognise as in any way typical, but then recent months have taught us to embrace the ‘new normal’ and adjust our sights accordingly.

Trips to the US – and, especially, to the UK’s favourite long-haul honeypot in Florida – remain non-existent for the time being, but, as Ian Dury insisted, there are reasons to be cheerful, and Universal Orlando can still supply some of them, face-masks and all.