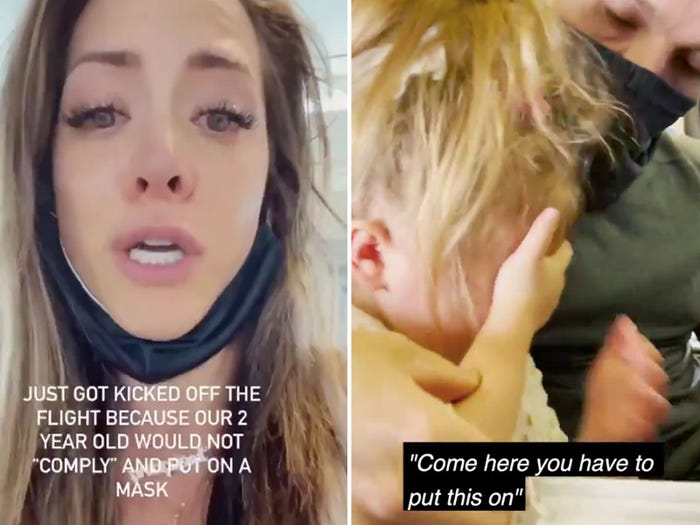 United Airlines seems to have a zero-tolerance policy when it comes to toddlers and masks, as evidenced by a video posted to Twitter on Friday by a passenger named Eliz Orban.

In the video, which has over 4.9 million views at the time of writing, Orban tearfully states that she and her family were kicked off a United flight from Denver to New Jersey's Newark International Airport because their 2-year-old daughter wouldn't keep her mask on.

Currently, all domestic airlines require passengers to wear masks. Most, like United, require this of anyone over the age of 2. However, some — like Delta, which states that "children under the age of two and young children who cannot maintain a face covering are exempt from the mask requirement" — allow a little more wiggle-room in their policies.

"We just got kicked off the flight because our 2-year-old would not put on a mask, and we tried," Orban said in the video, claiming that she was also banned from flying with United "forever," despite being Silver Premier members and flying with the airline frequently.

She also included footage from when they were on the plane, showing her husband's repeated attempts to cover their child's face with a mask while the toddler squirms.

"You have to put this on," he tells their daughter, who isn't having any of it.

Soon, a man who appears to be one of the flight attendants asks the family to grab their belongings "and exit the aircraft," citing non-compliance.

Orban's husband pushes back, saying that he's been holding a mask over his daughter's face, but to no avail. The video ends with the family disembarking the plane.

"The experience was absolutely traumatizing, very humiliating too," Orban said in an interview with Fox over the weekend, adding that they had no problem flying with United back in October.

In a statement sent to Insider, a United Airlines spokesperson said, "The health and safety of our employees and customers is our highest priority, which is why we have a multi-layered set of policies, including mandating that everyone onboard two and older wears a mask. These procedures are not only backed by guidance from the CDC and our partners at the Cleveland Clinic, but they're also consistent across every major airline."

The spokesperson added that United is investigating this specific incident, and has refunded the family's tickets and returned their luggage. The spokesperson also said that the Orbans are not banned from flying with United Airlines, contrary to what Orban claimed in her video.

While the Centers for Disease Control and Prevention recommends that "children 2 years of age and older should wear a mask," the World Health Organization says that "children aged 5 years and under should not be required to wear masks."

To date, Delta, United, and Alaska Airlines have had to ban over 900 people who refused to comply with mask requirements, the Washington Post reports. However, how many of these incidents were caused by toddlers is unclear.

Eliz Orban has not responded to Insider's request for comment.